To help commemorate Howard releasing his new book on Tuesday morning, longtime caller and always-exuberant superfan Mariann from Brooklyn was declared the Stern Show’s official guest announcer for the day.

Predictably, she kicked off the broadcast by lauding the King of All Media at the top of her lungs. “Congratulations, Howard! … It’s a big day, it’s a celebration,” shrieked Mariann, who said she was in the studio to “represent all the fans.”

“I gotta say, Mariann really is the biggest fan,” Howard stated before mentioning how hard she recently worked to promote his book across a variety of platforms.

“It’s the sweetest thing you could’ve done,” Howard told her. “I honestly was moved.” 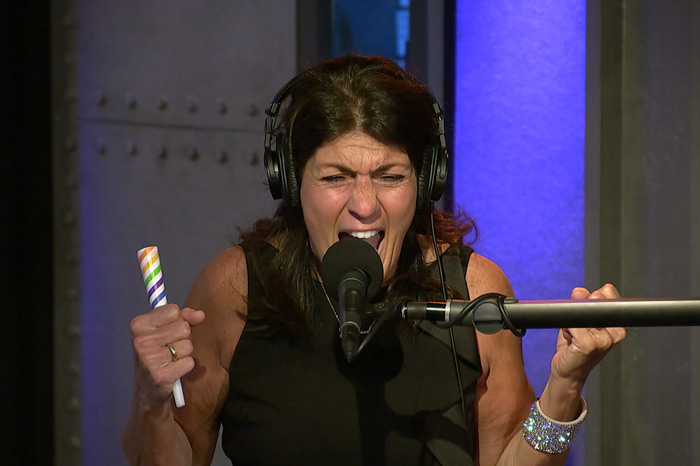 At that point, Mariann’s excitement once again became palpable. She even admitted losing her train of thought because her heart was beating so quickly. Howard suggested she calm down before doing damage to her body. “Save some energy for your announcements later,” he begged her.

After fielding a phone call from one of her own superfans, “Ann Marie from Queens,” Mariann calmed down enough to enjoy a more serious on-air discussion with Howard. She told Howard about everything from being a shy teenager to her lack of dating experience in high school.

Later in the show, Mariann called Tuesday “the greatest day of her life” and Howard revealed she even brought in a celebratory cake for him and his staff to enjoy.

Howard never got the opportunity to see the cake in its original condition, however, as executive producer Gary Dell’Abate took it upon himself to cut off a slice for himself while the show was still going on. It was Gary’s co-worker Shuli Egar who first noticed the missing piece, and he told Howard he had to talk to security in the building to find out who had eaten it.

Gary defended his latest instance of mid-show snacking by saying he asked around about the cake beforehand, but no one was buying it. “How is my cake?” Howard ultimately wondered.

“It’s good. Very good. I’m going to have another piece in a minute,” Gary laughed.

High Pitch Erik made the foreword all about himself, essentially telling Howard it was he who should be grateful for everything the Wack Packer has done for the show. Bigfoot couldn’t write well enough to complete the assignment, though he did tell Shuli he loves Howard. Bobo’s foreword, meanwhile, was complimentary of Howard, but everyone agreed it was way too long.

So did Mariann from Brooklyn, apparently. Bobo admitted getting her help with the foreword despite the fact Shuli told him to keep the assignment a secret. As a result, Bobo wound up cribbing the opening line from a book about Princess Diana.

Whether or not he wrote the words himself, the foreword Bobo put together made him emotional while reading it over the phone.

“Wipe your eyes with your toupee,” Howard joked.

Take a listen to some of Bobo’s foreword for “Howard Stern Comes Again” (below).