It’s been 26 years since Dana Carvey was last a cast member on “Saturday Night Live” but he still hasn’t stopped creating characters, impressions, and sketch ideas. He returned to the Stern Show on Wednesday and told Howard he comes up with a lot of comedy bits while hiking these days. Just recently he was perfecting his impersonation of Liam Neeson while out on the trail and admits he probably confused some fellow hikers passing by.

If his talent hasn’t gone away, Howard wondered if Dana would ever be interested in coming back to “SNL” full time.

His eight years at “SNL” in the late ‘80s and early ‘90s turned Carvey into not just a star on the late-night series but a star the world over. The characters he invented, like the Church Lady or Hans and Franz, became fan favorites. For Howard, he told Dana he often goes back and watches the Pepper Boy sketch he performed in alongside Adam Sandler, in which the two play waiters grinding pepper onto the plates of diners in a restaurant.

“It got kind of into that sexual rhythm,” Dana said with a laugh, remembering how he got behind cast member Tim Meadows and gyrated against his body as he ground the pepper mill. 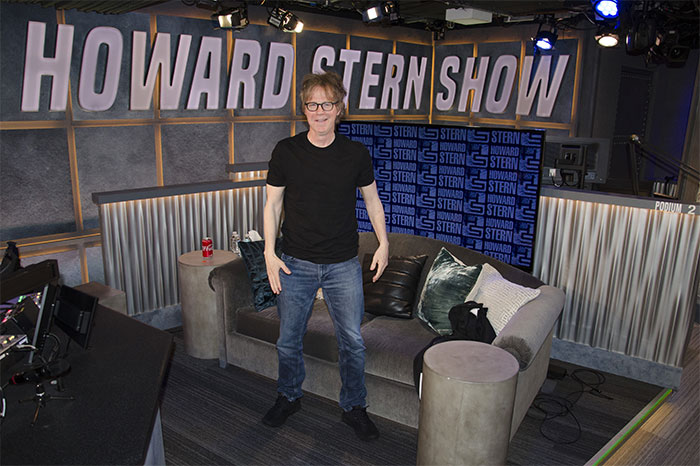 Also in the scene was Chris Farley who only had a single line, thanking the Pepper Boy for his services. He’d downplayed his dialogue all week in rehearsals, but during the live show Farley chose a different delivery.

“And all of a sudden Farley just becomes gigantic, like a bullfrog,” Dana recalled for Howard. “Sandler turns purple, but I thought, ‘Let’s not break because the sketch is so good.’”

He revealed he even advised his younger colleague on camera while remaining in character and using his over-the-top Italian accent, “don’t-a-break.”

Being funny in front of a crowd wasn’t always easy for Dana, even in his first few years at “Saturday Night Live.” His stage fright would be so bad during the show, he admitted his hands would sometimes be soaked with sweat. Howard told him he’d never noticed any sort of unease in Dana while watching him perform.

“In the early days, I faked it,” he explained.

He eventually conquered those nerves and excelled at celebrity impressions on the show, like of President George H.W. Bush or TV host Johnny Carson. One he dared not do in front of “SNL” head honcho Lorne Michaels, however, was his impression of Lorne himself. He told Howard he’d only ever slip into it backstage while hanging out with his fellow castmates which included Mike Myers.

Years later, when Mike hit box office pay dirt for 1997’s “Austin Powers,” Dana saw the film and thought Mike’s Dr. Evil character seemed an awful lot like his own impression of Lorne, right down to bringing a pinky finger up to the corner of his mouth. To this day, though, he and Myers have never discussed the similarities.

One of the most popular sketches Dana ever appeared in at “SNL” was playing Garth Algar opposite Myers’ Wayne Campbell character – two long-haired music fanatics with their own public access TV show called “Wayne’s World.” The sketch was eventually adapted into a commercially successful film, one that Dana nearly dropped out of. He told Howard he actually exited the project over a problem he had with the script, mainly that his character seemed to not really be in the movie at all.

“Mike was writing it and I was putting stuff in, you know, but then I would see that the stuff wasn’t in anymore,” Dana said. “So, I actually, three weeks before we started shooting, I said, ‘Thanks, but no thanks.’ I actually quit the movie … I’d have nothing to do in the movie.”

The film’s producers assumed Dana was bluffing but he stuck to his guns. Eventually he agreed to come back so long as he could insert himself into scenes and create a story arc for Garth.

“I was respectful,” Dana continued. “I was still being the sidekick and, respectfully, just wove a part for me in the movie.”

Despite any previous disagreements, Dana made it clear he remains friends with Mike and they get along great whenever they see each other.

“I was very lucky to intersect with Mike Myers,” he told Howard.

He’s also thankful that he was able to clear the air with comedian Robin Williams before his tragic death in 2014. “He wanted to make amends with me like a year before he died, out on a sidewalk in Northern California in the rain,” Dana remembered.

The two came up together in the San Francisco stand-up scene of the 1970s and were admirers of each other’s work. But it was Billy Crystal who once pulled Dana aside and revealed to him Robin might have admired his work too much as it seemed he’d started doing a character on stage very similar to Dana’s Church Lady.

On the night that Robin tried to apologize to Dana for stealing any of his material, Carvey assumed he was talking about Church Lady. But Robin told him he was sorry for referring to his penis as “Mr. Happy” in his act since he thought that joke was originally Dana’s. Robin was wrong.

“The one thing he thought he stole from me, I never did!” Dana told Howard with a laugh.

No visit from Dana is complete without him wowing Howard and Robin with his master impressions live on the air. On Wednesday, he imagined what it’d be like if Paul McCartney tried to explain the news of today to a confused John Lennon.

“This I do for myself,” Dana said of his original bit. “I want John and Paul to talk to talk to each other. I don’t care how.”

Dana Carvey lends his voice to “The Secret Life of Pets 2,” in theaters June 7.

EXCLUSIVE: Lady Gaga to Perform for SiriusXM Subscribers in June at the Apollo Theater