“We didn’t know that that was a potential danger,” the Hall of Famer tells Howard about head injuries in the N.F.L.

He remains one of the most indelible and intriguing players in NFL history. Now, Joe Namath is reflecting on his life on and off the field in his new book, “All the Way: My Life in Four Quarters,” available everywhere books are sold. On Monday morning, he sat down with Howard and shared both the highlights and lowlights from his storied career in football and how the game has changed in the decades since he last played.

A three-sport athlete in high school, Joe recalled caring far more about baseball, basketball, and football than on his studies as a kid. And while he can’t go back and try harder in his classes now, he told Howard how he stressed the importance of an education to his own children. A father of two grown daughters, Joe also revealed he wouldn’t want his kids to play the game that made him famous considering the link between brain damage and football.

“I wouldn’t want my son to go there because of the head injuries that we all had,” Namath said. 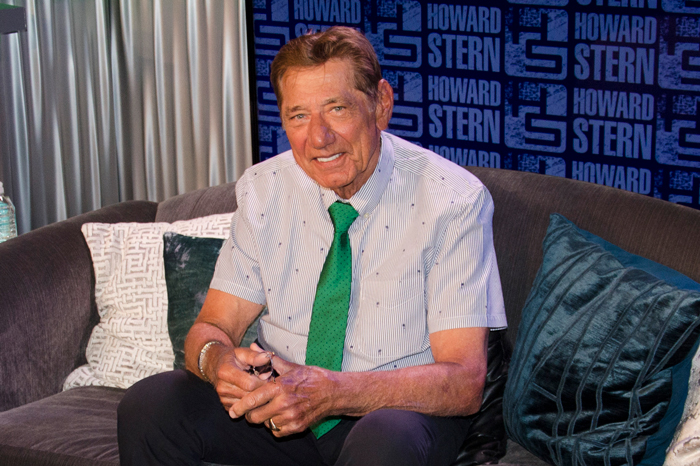 Joe told Howard he’d sustained at least five concussions himself while playing football. After witnessing the mental acuity of some of his teammates rapidly decline, he took it upon himself to get a brain scan done. Doctors discovered dark spots on the left side of his brain, signaling sections that weren’t receiving enough blood.

In order to reverse the damage, Namath began undergoing hyperbaric oxygen therapy. After completing 40 “dives,” Joe’s brain was once again scanned and showed the dark spots were getting lighter. He continued with the treatments and his scans continued to show progress.

If hyperbaric oxygen therapy could work so well in healing Joe, Howard wondered if other N.F.L. players should attempt similar treatment, especially those still playing the game.

“I don’t know that there’s a stadium in our country that has a hyperbaric oxygen unit in there,” Joe said, adding the league most likely will never offer those treatments as that would be an acknowledgment of the danger players face on the field.

Whether the N.F.L. admits it or not, the risk of C.T.E. and other brain injuries is something players nowadays are well aware of before they suit up on Sundays. “We didn’t know that that was a potential danger,” Namath said of the men he played with who have since suffered.

As good as Joe was under center during his 13 years in the pros, he told Howard there’s no question who the best quarterback of all time is: Tom Brady.

“I’ve actually lost games for our team by throwing poorly, throwing interceptions. I have not seen Tom Brady lose a game for his team,” Joe admitted. “He’s the best at answering the challenge.”

Talent can only get a player so far, however. Other factors, like staying healthy or having capable teammates, are just as important to having a successful football career in Joe’s estimation.

“Lady luck plays a role. Anybody can get hurt. Anybody can have an accident,” Joe explained. He also pointed to Archie Manning as the greatest quarterback to never be inducted into the Pro Football Hall of Fame due to his team, the New Orleans Saints, struggling while he was on their roster.

There was a little bit of luck on Joe’s side headed into Super Bowl III in 1969, a game in which he famously guaranteed victory over the heavily favored Baltimore Colts. His prediction came true with the Jets winning 16-7. Namath was named MVP and instantly became a household name nationwide. When ABC launched “Monday Night Football” in 1970, the network counted on Joe’s new star status to help draw football fans to the new broadcast.

Fifteen years following that inaugural “Monday Night Football” game, Joe found himself back on ABC’s airwaves, this time as a color commentator. Next to him in the booth was fellow former pro O.J. Simpson, long before the famed running back was charged with murder.

“I still try to live by, ‘If you don’t have something good to say about somebody, try not to say it at all,’” Joe said of his time working with Simpson.

In the year they worked together, Joe stated he never observed O.J. get angry toward him or toward a woman, but made it clear their relationship was strictly professional. “We didn’t hang,” Namath told Howard.

Before his Stern Show interview came to a close, Joe told Howard something he’d never told anyone prior to today – he got lucky the night before playing in Super Bowl III.

“There was a knock on the door after curfew and it happened to be a lady from New York,” Joe remembered. “I think somebody sent her because when we were there, she started chuckling and after a while she said, ‘My dad, he’d go crazy if he knew I was here.’ I said, ‘Why is that?’ She said, ‘Well, he’s in Baltimore.’”

That this young woman quite possibly could have been the daughter of a fervent Colts fan made Joe question whether he was being set up. Even if she was a last-ditch effort to wreck Joe’s game, it didn’t work. Plus, Joe got to enjoy a little romance before playing the biggest game of his life.

“Is that what the Colts forgot?” Robin Quivers asked with a laugh.

Joe Namath’s new book, “All the Way: My Life in Four Quarters,” is available now.