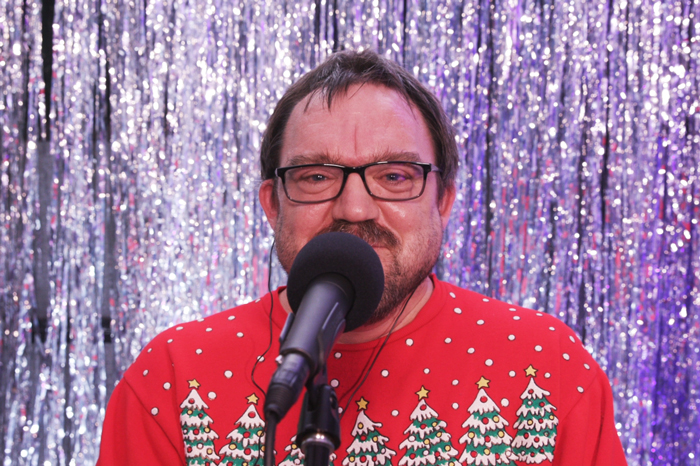 Hollywood Squares proved to be the gift that kept on giving Wednesday morning as Howard debuted several behind-the-scenes clips of Mark the Bagger talking and singing to himself during last month’s star-studded game.

The first clip was recorded while fellow Wack Packer Wendy the Slow Adult was getting handsy in the studio with Stern Show staffer Brent Hatley’s wife, Katelyn. “He’s on another planet or something,” Howard said. “While these two are feeling each other up—which you’d think would be something Mark would be into—he starts singing to himself.”

Howard struggled to decipher Mark the Bagger’s quiet ramblings. “Is he talking to something or an imaginary friend?” he asked.

“That’s the last thing you hear before someone kills you,” Stern Show staffer Shuli Egar joked.

“This is what it sounds like inside the brain of a Wack Packer,” Howard said, adding, “The guys swear it’s a song. I said he’s putting a spell on people.”

A fascinated Howard encouraged Shuli to consider doing another Embedded special with him, but the staffer was reluctant to accept the assignment after one of Mark’s buddies sent him a disturbing picture of the gunk-covered floor at the Wack Packer’s home.

“It’s like a Jackson Pollock painting on the floor,” Howard said after seeing the photo.

Mark’s unusual behavior also reared its head at one of Shuli’s recent comedy shows when he flubbed High Pitch Erik’s name while trying to introduce him on stage. “He went to announce Erik and he went, ‘Please welcome Eric the Midget,’” Shuli recounted.

High Pitch Erik called in on Wednesday and shared updates about his own life, including his booming Cameo business which has apparently lined his pockets with so much money he’s now in the market for a $30,000 Ford F-150. “I’ll pay like $200 a month,” he explained.

Gary Dell’Abate chimed in after hearing about Erik’s latest windfall and reminded the Wack Packer to share some of his newly acquired cash with Uncle Sam. “You do have someone who helps you manage your money and pay your taxes?” the Stern Show’s executive producer asked.

“Yes,” High Pitch insisted. “I have an accountant.”

Regardless of what vehicle he might be driving next, High Pitch still seems to be struggling behind the wheel. He reluctantly told Howard he was recently pulled over yet again—this time for tailgating a police officer.

“Do you know what tailgating is?” Shuli asked.

“When you ride up someone’s ass,” High Pitch said, just before insisting he may have been the victim of racial profiling.