VIDEO: JD Harmeyer’s Wild Night of Wine and Weed Led to Tears, Karaoke, and Opening Up About His Stern Show Co-Workers 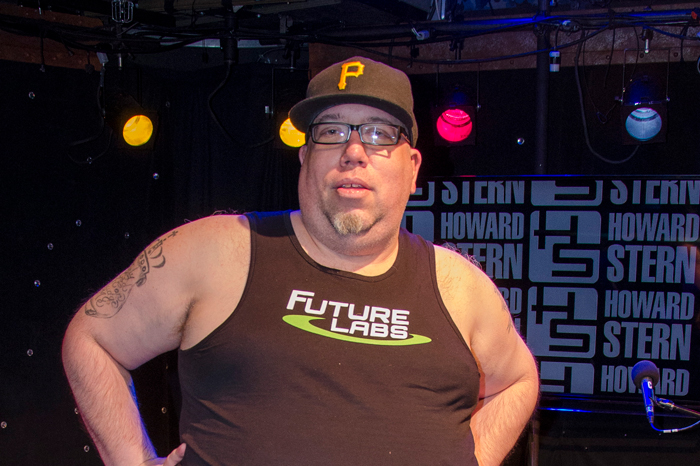 High Pitch Erik’s health and weight issues have been topics of conversation on the Stern Show for years, but on Monday Howard revealed the Wack Packer had recently taken to talking about his struggles on another show: “Live! with Cathi.”

Erik pretended to be Erika in a new phony phone call and dialed up Cathi, whose show has been host to several memorable pranks in the past. “He was talking about that he weighs over 600 pounds,” Howard explained before playing the call.

“Hello, Cathi? I need some help. My name is Erika,” the Wack Packer began. “You like to exercise, right? Because I’m really fat and I need to lose some weight.”

Cathi was understanding at first but flipped her lid after “Erika” revealed she weighed 600 pounds. “What! I’m speechless,” Cathi responded. “In this day and age, Erika, I’m sorry, dear, that is unacceptable. No one weighs this much. Think of your heart!”

High Pitch Erika soon put her “father” on the phone. Voiced by clips of Howard, her dad revealed Erika hadn’t been thinking of her heart quite so much as soda, chili cheese dogs, lasagna, and more. But Cathi wouldn’t accept that. “My dear, it’s her choice. She’s smart enough, she’s intelligent, and she knows what’s going to happen,” she said.

Even after getting put on the phone with Erika’s “grandfather,” Cathi still didn’t change her tune. “Our greatest power is that of choice,” she concluded, adding, “Don’t blame anyone else. I don’t care if you’re one pound or you’re 10,000 pounds, it is because of your choices.” Take a listen (below).