“I’ll be thanking you for the rest of my life,” the Stern Show staffer tells his boss 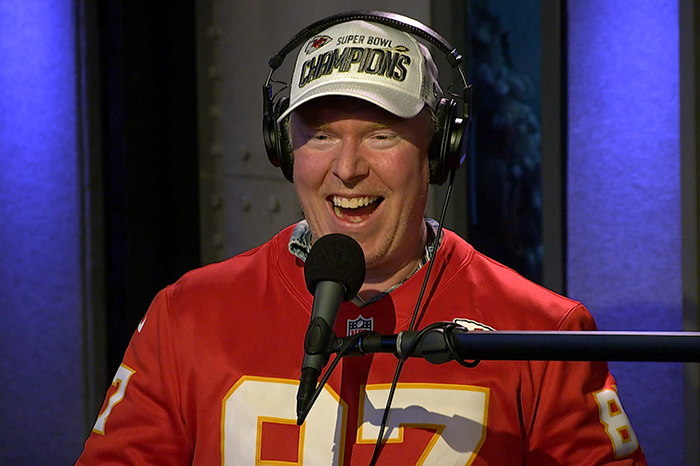 After Stern Show staffer and diehard Kansas City Chiefs fan Richard Christy delivered an emotional monologue prior to his team defeating the San Francisco 49ers in Super Bowl LIV, many listeners wondered how he spent the game. “So, I sent Richard to the Super Bowl,” Howard revealed on Tuesday.

While it was Howard who got Richard to Miami for the big game, New England Patriots president Jonathan Kraft was responsible for the staffer’s significantly upgraded seats. “No, no, no,” Kraft reportedly responded after hearing where Richard was sitting. “Put him right on the 50-yard line.”

“I’ll never, ever, ever utter a bad word about the Patriots or Tom Brady again,” an incredibly grateful Richard stated on Tuesday. “The seats were insane.”

After taking time to reflect on both the big victory and attending his first Super Bowl, Richard has only grown more appreciative of the entire experience. “The only thing I can compare it to is if somebody came up to you and said, ‘Here’s a ticket to go see all four original Beatles,’” he told Howard. “I’ll be thanking you for the rest of my life.”

With his team down at the start of the fourth quarter, Richard confessed he believed he would have to wait at least another year for a Chiefs Super Bowl win. That all changed when quarterback Patrick Mahomes, who last year famously promised Richard a championship, came through in the clutch. “Seven minutes 13 seconds left, fuckin’ Mahomes throws a 44-yard pass … and that’s the fuckin’ beginning of the comeback like they always fuckin’ do,” Richard recounted. “It was amazing.”

Hearing audio of Richard cheering his team on over the course of the game, Howard and Robin had some observations. “Are you coming or watching the game?” Howard asked. “Sounds like he is caught in a bear trap.”

“Isn’t he having a seizure?” Robin added.

The one question remaining was if Richard would make good on his promise to shower more regularly if the Chiefs won. “I’m trying to keep that promise, starting today I will,” Richard told Howard. “And I washed my jeans for you.”