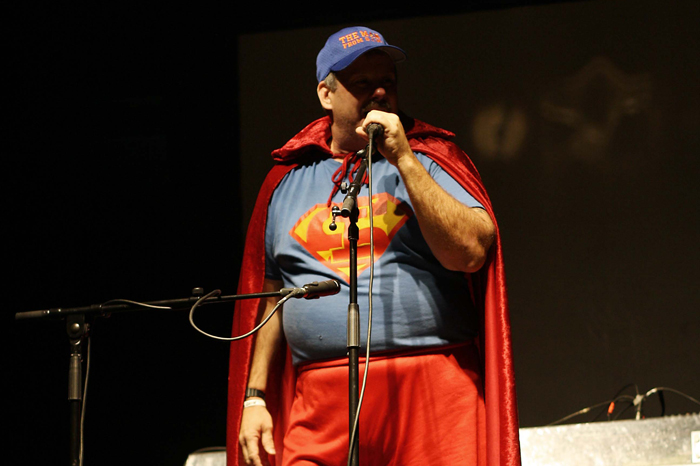 Speech Impediment Man got a master class in comedy from Howard, co-host Robin Quivers, and Stern Show staffer Shuli Egar on Wednesday. The frequent caller wanted to share a joke he’d written about the ongoing coronavirus outbreak, the punchline of which mentioned drinking Bud Light instead.

When that didn’t land as well as the aspiring comic might have hoped, he told Howard he’s still honing his skills. “I did some shows with Shuli in Cleveland and L.A., I’ve been working at it,” Speech Impediment Man explained.

“Shuli goes out on the road, Speech Impediment Man shows up on the road at various shows dressed up in a fucking Superman outfit,” Shuli clarified with a laugh. “I give him five minutes.”

Something Howard, Robin, and Shuli couldn’t grasp was why Speech Impediment Man doesn’t mine material from his life and struggles. “One of the things I realized early on was you gotta talk about the truth,” Howard offered.

Shuli, who has known Speech Impediment Man going back 20 years since his open mic days, recalled a funny moment from the first time they met that he sees as potential material. “While I’m introducing him, I see the bartender yelling at him that he’s cut off because the bartender thought he was drunk because of the way he was talking,” Shuli recalled. “That’s hilarious.”

After explaining that he’s been improving, the budding comic was ultimately appreciative of all the advice. “You’ve inspired me, Howard,” Speech Impediment Man said.

“Whenever you need to get up on stage, you show up at Shuli’s show, I’ve commanded him,” Howard responded.

“You have carte blanche,” Shuli agreed.