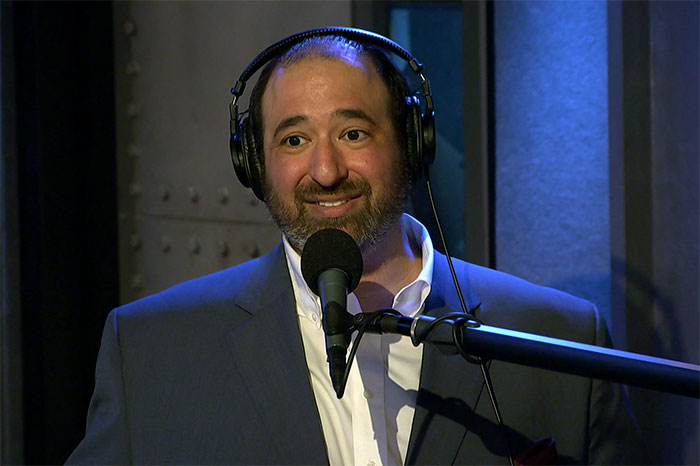 A dream-like dinner party turned into an absolute nightmare last week after Stern Show staffer Jason Kaplan got violently ill and his co-workers were forced to rush him to the hospital. Executive producer Gary Dell’Abate and his colleague Chris Wilding also attended the event, which came to an abrupt end when Jason was incapacitated by what he believes was food poisoning caused by a severe allergic reaction to crab.

“It’s like your whole body is rejecting you,” Jason explained on Monday. “It’s like everything feels the opposite of what it should feel. I’m sweating like I’m in the middle of the desert, and I’m shivering like I’m in Antarctica.”

The staffer reportedly vomited multiple times during the four-course meal, which featured everything from smoked salmon, lobster, caviar, and dry-aged steak to Dom Pérignon and sake—not to mention copious amounts of marijuana. Jason’s co-workers couldn’t help but overhear him getting sick in the bathroom, as the soiree was being held in a tiny studio apartment, so they recorded it.

“I couldn’t even close the bathroom door closed behind me to throw up, so half my body was still in the kitchen,” Jason said as Howard played clips of him getting ill.

While crab wasn’t served that night, Jason said his allergy has grown so sensitive that it’s possible the lobster he ate may have just come in contact with crab. “If somebody has crab on their breath and I smell it, it can put me into anaphylactic shock,” he explained, saying he’s now started carrying an EpiPen with him everywhere just in case something similar happens in the future.

Regardless of what caused it, Jason eventually grew so ill he asked his co-workers to take him to the hospital. After a long debate about which hospital to go to, Gary, Chris, their host, and an increasingly unwell Jason all hopped into an Uber. It didn’t take long before their driver had to pull over so Jason could vomit some more.

“I’m surprised the guy didn’t throw you out of his car,” Howard said. “Did he think you had coronavirus?”

“I thought I was gonna pass out, so I really don’t remember,” Jason said over more clips of him dry heaving out the door of the Uber.

“I thought he was gonna, like, lose it in the Uber. I mean like die,” Chris said. “He was in really bad shape.”

At the hospital, doctors ran some tests on Jason and treated him for food poisoning. Howard was happy his staffer got the treatment he needed but questioned everyone else’s decision to visit a hospital with the looming threat of a pandemic. “You know this whole coronavirus is going on, you bring him to the emergency room, you fuckers are all sitting in a hospital—the worst place to be right now is a hospital for coronavirus,” Howard said.

“Should we have allowed him die?” Gary asked.

“Just roll him out onto the fucking floor and get out,” Howard joked.

“Throw him out and tell the people in the E.R. there’s somebody that needs help,” Howard’s co-host Robin Quivers added.

“I’m so glad I wasn’t with you two,” Jason laughed.

The night held plenty of disappointments, but Chris seemed most annoyed that the impromptu trip to the hospital caused them to call off dinner before sampling all the desserts. “You know the biggest tragedy of the night?” he said. “There were black-and-white cookies and Gary never got to have one.”

“I never got my cookie,” a despondent Gary agreed.