Sal Governale and Richard Christy worked up a sweat on Tuesday as they attempted to roll over their co-worker Jason Kaplan live in the studio. The duo concocted the experiment after Howard and co-host Robin Quivers’ discussion about the reality show “My 600-lb Life” resulted in a mortician calling in to reveal how grueling it can be to procure obese people that die in their homes.

“We want to see how difficult it is because these E.M.T. workers have to carry these fat people,” Sal told Howard.

“He’s gonna lay on his back, deadweight,” Richard explained. “Sal and I are going to get on one side and see how far we can roll him.”

Before the experiment commenced, Jason stepped onto a scale so his colleagues would know exactly how much weight they were pushing. The staffer clocked in at 303 pounds. 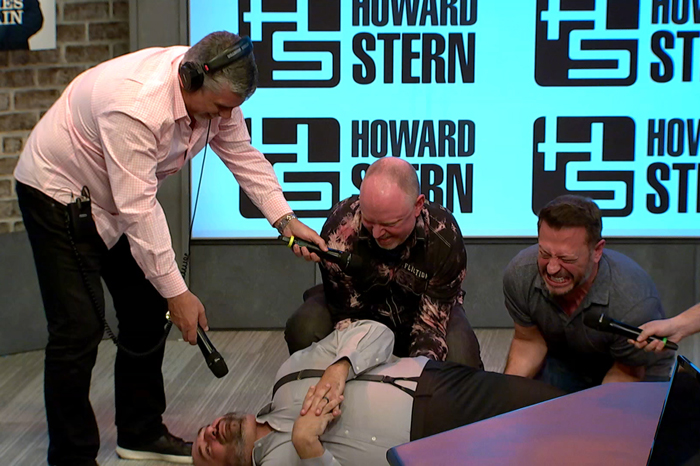 Howard was concerned Richard and Sal would have trouble rolling Jason over, but Richard assured him he was no stranger to handling hefty slabs of flesh. “I grew up on a farm and we used to have hogs, and you’d have to like get them up sometimes,” Richard said.

Even so, rolling Jason over proved to be no easy task. Richard and Sal grunted and sweat their way through the ordeal, though the man on the floor wasn’t convinced they were giving it their all. “Oh, you’re barely trying,” Jason told them, mid-roll. 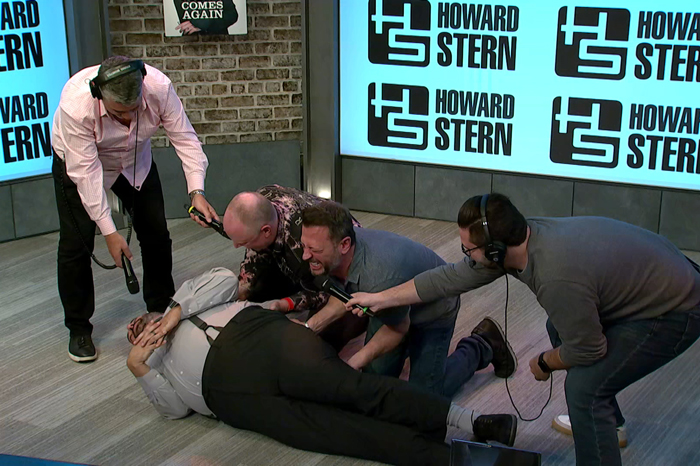 Howard wondered if Jason was at all embarrassed to find himself in this situation. “I don’t think about it that often until you lay down on the studio floor and have two nudniks try and roll you over, and now that’s all I’m thinking about,” Jason admitted.

“You know what I’m thinking about?” Howard countered. “If you die in the studio, I’m screwed. I don’t know how I’m going to get you out of here.”

Robin thought of a solution, which seemingly involved a bone saw and going to a very, very dark place. “Once a six hundred pound person dies, why do you have to keep them whole?” she asked.

Richard’s thoughts, meanwhile, mostly involved sexual acts with other men. Though the staffer usually seems up for anything in the studio, Howard revealed his staffer had recently declined the opportunity to share a three-way kiss with Sal and comedian Eric Andre.

“How come you didn’t want to make out with him?” Howard asked.

“It’s a little too intimate, I don’t know,” Richard said, explaining he’d once made out with Joey Boots and didn’t enjoy it.

“I don’t care what’s considered gay or not,” Richard added. “He can lick my ass, eat my ass, lick my balls, whatever he wants to do.”

Executive producer Gary Dell’Abate was stunned by what he was hearing. “You would get down on all fours with your pants off and let a man come and stick his tongue in your anus?” he asked.

“But you won’t kiss him?” Howard asked.

“No,” Richard said. “I don’t know, there’s something just too intimate about kissing.”