Wack Packer reportedly raises over $1,000 during the event

Patricia “Tan Mom” Krentcil technically joined the ranks of the Rolling Stones, Elton John, and Jon Bon Jovi recently as the Wack Packer put on a coronavirus-inspired benefit concert to raise money for a good cause. Dubbed “QuaranTanned,” the event kicked off with a Tan Mom sizzle reel, featured multiple performances from her and her longtime collaborator Adam Barta, included a pitch for a potential reality show called “Tan to 10.”

JD Harmeyer, who experienced QuaranTanned live after accidentally purchasing two tickets, told Howard the 45-minute-long event was marred by technical glitches and audio problems. Considering the staffer has rated quarantine broadcasts for weeks with his patented Filet-O-Fish scale, Howard wondered how this one compared.

“I would give it a three out of five,” JD said on Monday.

“Really?” co-host Robin Quivers said. “That’s not a flop by any stretch of the imagination.”

Staffer Shuli Egar gave a thumbs up as well. “I watched parts of it. It was amazing. Anytime she performs I will watch because it’s like a snowflake—no two are alike,” he said. “Every show is different.” 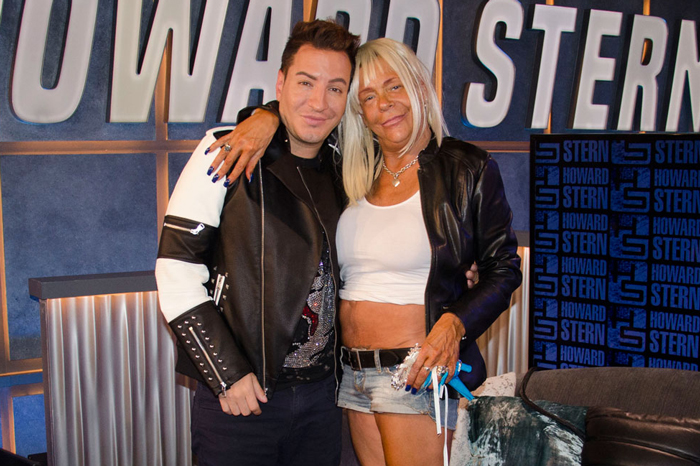 Tan Mom and Adam Barta on the Stern Show in 2018 Photo: The Howard Stern Show

Tan Mom herself joined the Stern Show remotely on Monday and explained over 150 people spent $5 each on a ticket and Barta donated $420 dollars of his own money with much of the proceeds going to God’s Love We Deliver, which home-delivers meals to those in need.

“Do you think the people got their money’s worth?” Howard wondered.

“Definitely, it was a fun time,” she replied.

That fun also included Tan Mom flashing her breasts to fans. But the Wack Packer tried explaining it away to Howard. “I was changing my shirt because I spilled something on it. The camera was right there. Like, whatever. It was an accident,” she insisted.”

Either way, JD didn’t much mind. “I’m going to turn into Sal for a second—her boobs, like, looked good, like, within the top that she was wearing,” he said, referencing fellow Stern Show staffer Sal Governale’s long-stated infatuation with the Wack Packer.

Howard played several QuaranTanned clips, including performances of Tan Mom and Barta’s songs “Glossy” and “Free 2 Be Me.” At times, the Wack Packer’s vocals were barely noticeable. “All you could hear was Adam and the track,” Howard said, adding, “It’s like bad karaoke, but it’s their song.”

“I’ve gotten better,” Krentcil said of her singing. “I definitely try. It’s just more Adam’s job. I kind of like bring on the people. He brings on more of the singing, obviously—he’s a singer. I said that from the get-go.”

In addition to raising money for charity, Tan Mom also hoped to raise enough money to buy her own home tanning bed to use during quarantine. Unfortunately, that wasn’t in the cards. “The tanning bed company that Tan Mom wanted to buy a bed from wouldn’t even call her back,” Howard said, explaining that Adam theorized the company didn’t want their brand to be associated with the Wack Packer.

“But who loves tanning more than Tan Mom?” Robin wondered.