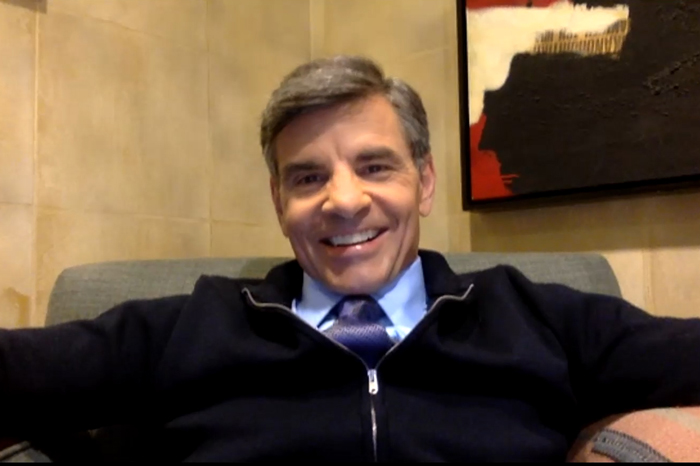 Respected journalist, political analyst, and former White House Communications Director George Stephanopoulos got fact-checked in real time on Wednesday when his wife Ali Wentworth called into the Stern Show to dispute his account of their very first date. As George remembered it, an old girlfriend and some mutual friends paired them up on a blind date in the early 2000s. He offered to take Ali to dinner but she made him settle for lunch at a Madison Avenue restaurant called Fred’s.

“Was it love at first sight?” Howard asked George on Wednesday morning.

“Yeah. I think we both knew within—if not at that lunch—within a couple days,” George told him, explaining they got together again the next night and also the day after that. “It was so fast and so powerful.”

But just a few minutes later Ali called in to share her version of the story. “I’m just curious why my husband downplayed our first date,” the actress, comedian, and best-selling author told Howard.

She then proceeded to address her husband directly. “George, if you recall, I was very reluctant to go on a date with you. You were like a pit bull with a chew toy when it came to me,” Ali said. “I don’t want to rewrite history but, you know, I didn’t even shave my legs the day we met for lunch.”

“I had no expectations whatsoever,” she continued. “I did not think I was going to end up with George Stephanopoulos. I thought, you know, Hugh Grant—someone like that.”

Regardless of how George and Ali’s first date really went down, the two fell in love quickly. “We met in April of 2001, got engaged in June, got married in November, and haven’t looked back,” George said.

Howard wondered if friends cautioned him against moving so fast, but as George explained it they had the opposite reaction. “[They said] George you better grab her. You better make sure this sticks because you’re passing your sell-by date,” he recalled.

The couple also opened up to Howard about several other aspects of their relationship, including who fixes things around the house—it’s Ali—and how the pandemic laid waste to their otherwise vibrant sex life. In April, the couple revealed both had tested positive for the coronavirus. While George was relatively asymptomatic, Ali’s battle with COVID-19 left her bedridden for weeks and sleeping up to 16 hours a day.

“I was sick for a while and nobody wanted to get anywhere near me. I think there’s something about the pandemic that has made everybody shut down a little bit, physically. I don’t think anybody feels sexy … You’re wearing droopy clothes. Dark roots, all kinds of hair growing out in places you didn’t know. It’s not a sexy time,” she explained.

Thankfully, Ali is feeling much better. “[I’m] fully recovered with positive antibodies, whatever that means,” she told Howard.

Long before winning Ali over on a blind date and landing a series of increasingly prominent network news positions, Stephanopoulos got his start as a political consultant. He worked for Michael Dukakis’s unsuccessful 1988 presidential campaign and held a prominent role on Bill Clinton’s 1992 campaign team.

“Did you really believe from the start of that campaign that Bill Clinton was going to win the presidency?” Howard asked. “Or was it kind of like a crapshoot?”

“In between,” Stephanopoulos said. “I thought actually winning the presidency, given how popular President [George H.W.] Bush was, would be tough but … when I met him he was just so impressive. He knew why he wanted to be president, what he wanted to do as president, how he would run for president, and actually—in our first meeting—he actually called the primary where he would basically clinch the nomination … and he was basically exactly right.”

Given how many other opportunities George likely had at the time, Howard wondered what inspired him to risk his career on the long shot presidential bid of a governor from Arkansas. “Everything has risk associated with it, but look at the flip side: the chance to work on a presidential campaign which is both exciting and challenging and meaningful,” George said. “When you’re 29 years old, I couldn’t imagine anything more exciting than giving that a try and see what happens after that.”

The gamble paid off and Stephanopoulos quickly found fame as not only the White House Communications Director but also one of America’s most eligible bachelors. In 1996, his status as a sex symbol was solidified when he became the object of adoration on an episode of NBC’s “Friends.” “That was one of the craziest days of my life up until that point because I didn’t know it was coming,” George recalled. “I was at the gym at night. I had one of those beepers on my belt and it started to go nuts because everybody was watching ‘Friends.’”

“That became unfortunately—or fortunately—my claim to fame for a long time,” he added.

George left the White House in the mid-1990s while President Clinton was still in his first term. Howard wondered what led to that decision. “I was a senior advisor when I left and a lot of my job had always been this kind of crisis management side of the White House, which can be exciting, but it does burn you out as well and exhaust you,” he said. “I felt like it was a natural time for me to go out.”

Clinton’s scandal involving White House intern Monica Lewinsky didn’t blow up until after George left, but he didn’t shy away from sharing his thoughts on the matter. “I was critical of that. I did think it was kind of a reckless act. It was a wasted opportunity. I still thought he was a good president overall, but there was so much waste caused by that—by what happened and by what he did,” he told Howard.

After turning down some corporate gigs, George was hired as a political analyst and correspondent for ABC News. While his years in the White House press room certainly helped him hone his journalism instincts, nothing prepared him for broadcasting.

“I think the only way you learn how to do this is by doing it,” he told Howard, explaining that when he first started he had no idea how to smoothly read a teleprompter or even properly project his voice.

Two decades later, George is one of the faces of ABC. Some even consider him the sharpest interviewer on TV. He’s sat down with world leaders like Vladimir Putin and Barack Obama over the years, but on Wednesday he told Howard one of his most memorable exchanges happened last June while interviewing Donald Trump. He asked the president if he’d accept damaging information from a foreign government about an opponent during an election. The world was shocked when President Trump said he would and footage from the interview would later be used against Trump in his impeachment trial.

Howard wondered how George felt when Trump answered the question that way. “You just can’t believe it,” he told Howard, adding, “That was about the biggest piece of news I ever elicited in an interview and it was big news for several weeks but … kind of got folded into everything else.”

Howard was curious if George’s political leanings ever inhibited his ability to do his job. “No,” he said, adding, “Everybody has political views of some kind or another. It’s no secret where I worked or what I was working for, but I work pretty hard when I’m actually doing the interview, doing my best to be tough and fair to both sides.”

At one point during their conversation, Howard noted his guest looked presidential, “as usual.” As fans will remember, Howard pitched the idea of George running for president to Ali back in 2017, but it never came to pass. “Did you take it as a complete joke or did you talk it over with your family?” Howard asked.

“They talked it over with me. I thought it was a complete joke, thank you,” George laughed.

“I didn’t’ say that, but I’m not going to be immodest either,” George said, adding, “Being president is an amazing job. I just didn’t see it in the cards last year. I didn’t see a viable path there.”

For the time being, George insisted he’s quite happy anchoring “Good Morning America” during the week and hosting “This Week” on Sundays. Being on TV six days a week sounded grueling to Howard, though, especially after George said he sometimes started work as early as 3 a.m. Howard didn’t hesitate to suggest a more relaxing gig: taking over for Alex Trebek as the host of “Jeopardy!” The move made perfect sense to Howard as George is both a well-respected TV personality and a brilliant Rhodes Scholar.

“Do you ever watch ‘Jeopardy!’?” Howard asked.

“Are you able to answer most of the questions?” Howard wondered.

“I don’t know about most, and I don’t know how I’d do on the buzzer, but, you know, we all play along at home,” he said.

“Would you take that job?” Howard wondered.

Ever the communications professional, Stephanopoulos stayed diplomatic. “I think it would be a lot of fun, but I like what I’m doing, too,” he concluded. “I’m not going to be Shermanesque about it but, you know, it’s a great show.”