“I can make you explode within minutes,” the staffer tells the Wack Packer in the hopes of persuading him 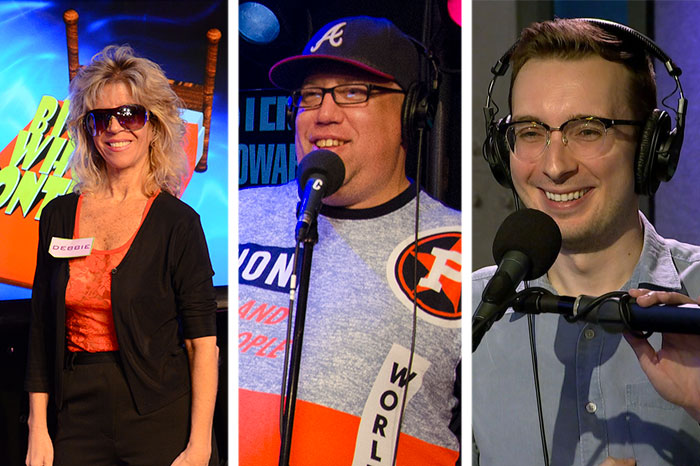 “We got Chris and Debbie on a conference call with Erik … and asked them to make their strongest pitch,” Howard said before playing clips of the trio’s sexually explicit conversation (below).

Debbie made her opening remarks first.

“I have years of experience over Chris and you know how much I want to shove my tongue and fingers up your ass to get you nice and hard, but I can make you explode within minutes,” she told High Pitch.

Chris, meanwhile, felt his exuberance trumped her experience. “I may be newer at the game, but I bring a younger and more excited eagerness” he said.

“Plus, you searched for my cock that time on the show,” High Pitch pointed out.

Their opening salvos were cordial, but Chris eventually took a few shots at Debbie.

“I was really disgusted by the fact that you once told Sal [Governale] you freeze loads for use later on. That’s like going to Nobu, ordering sashimi, and popping it in your freezer,” he told her. “It’s insanely disrespectful.”

But Debbie turned Chris’s attack into an opportunity to show Erik what kind of attention he could expect from her. “I want as much of Erik’s loads as I can get. So, if he could save it for me I would love it. I can’t get enough of him,” she told High Pitch.

“Let me tell you, that’s the first time I threw up while listening to this thing,” Howard interjected.

The three-way conversation got steamier as the clips went on with Chris and Debbie boasting about their oral sex skills, the toys they use in the bedroom, and how much they like to give foot massages. At one point, Chris even demonstrated his gargling prowess.

After hearing Chris and Debbie’s closing arguments, High Pitch was ready to make his decision. Before the big reveal, however, Stern Show co-host Robin Quivers offered up her prediction. “[Erik] hears Debbie loves him, but he’s never really experienced her. I think he’s going to go with Chris,” she said.

“Oh God, you made my day. I’m so fucking excited, thank you. Believe me, you will not regret it,” a victorious Debbie responded.

Chris was less than thrilled. “I don’t know, Erik, Debbie is a very nice lady but … I think you’re making a real mistake,” he said.

Robin was shocked by High Pitch’s selection, but Howard offered up a theory. “Erik has been with Chris Wilding, he has come on to him, and Chris never puts out,” Howard said before suggesting the Wack Packer believed things would go differently with Debbie.

Erik ultimately consummated his decision with an impromptu round of hot and heavy phone sex with Debbie. “I’m going to do a foreplay with you,” High Pitch told her, adding, “I wanna be the bottom.”

“I don’t think Erik has any idea how sex works, so even his phone sex is completely warped,” Howard concluded.