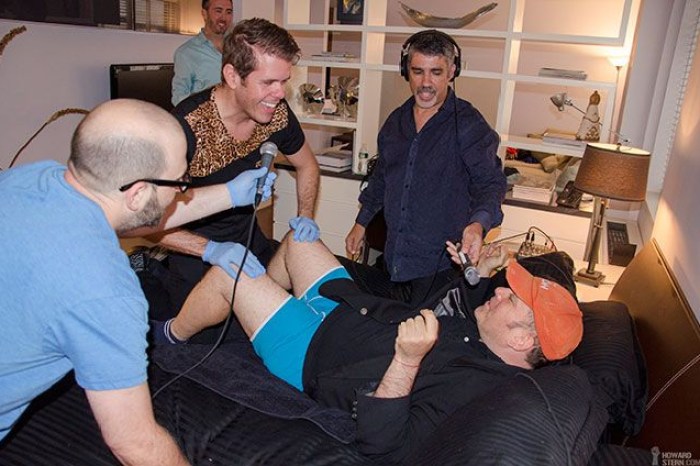 They say the pen is mightier than the sword, but in case of Perez Hilton’s new book the finger was mightiest of all.

The gossip blogger released a new memoir “TMI: My Life in Scandal” which features a chapter about Howard and goes into great detail about Perez’s infamous December 2014 Stern Show appearance during which he digitally penetrated staffer Benjy Bronk live on the air.

On Monday morning, Howard brought Benjy on to share his own recollections from that fateful day. “It ended up being like a huge thing that I was proud of. I mean, in a stupid way,” he said. “I mean, it was fun. I was on TMZ that day. Everyone was talking about it. Wanda Sykes talking about it.”

Executive producer Gary Dell’Abate vividly recalled being on the scene, too. “Benjy is on the bed with his pants off. I am lying next to him and we’re head to head because we’re sharing headphones—and Perez is at the other end with a rubber glove on,” he said. “It was the weirdest thing ever.”

After looking back at a defining moment of his Stern Show career, Benjy then dared to look forward. The staffers were polled on what they’d do if the show ended and Benjy evidently offered up a most unique response. He said he’d “clean out his storage units and focus on losing a lot of weight.”

“That’s one of my life dreams,” Benjy said.

“Why are you waiting until I retire for that?” Howard asked.

Regardless of what Benjy does in the future, Howard will always be grateful for how his staffer went that extra mile back in 2014. “You really put your ass on the line, no pun intended. You really did,” he laughed.

Ronnie Mund Is One Step Closer to Moving to Las Vegas