VIDEO: Richard Christy Gives a Tour of His Filthy Bathroom

Howard’s limo driver makes his decision once and for all

Howard’s longtime stylist Ralph Cirella put forward a shocking proposition on Tuesday, vowing to open up about his sexuality on air in exchange for Ronnie Mund’s vote in the upcoming presidential election. Ralph, an ardent supporter of former Vice President Joe Biden, hoped to persuade the staffer to come over to his side of the aisle. Ronnie requested a night to think over his proposal and on Wednesday morning Howard was eager to learn what his limo driver had decided.

“Ralph said he would answer three questions [about his sexuality],” Howard told him. “But Ronnie, in order to get the answer from Ralph, he asked you to vote for Biden.”

As Ronnie mulled it over, Ralph sweetened the deal. “I’m going to make this easier,” he said. “Making him vote for somebody is bullying him. Here’s all I want from Ronnie: I want him to just say who he’s voting for. Simple.”

Ronnie insisted he wasn’t interested in the details of Ralph’s sexuality, but Howard reminded him the rest of the world was. “We care, Ronnie,” Howard said. “All you gotta do is say who you’re voting for … What’s it gonna be?” 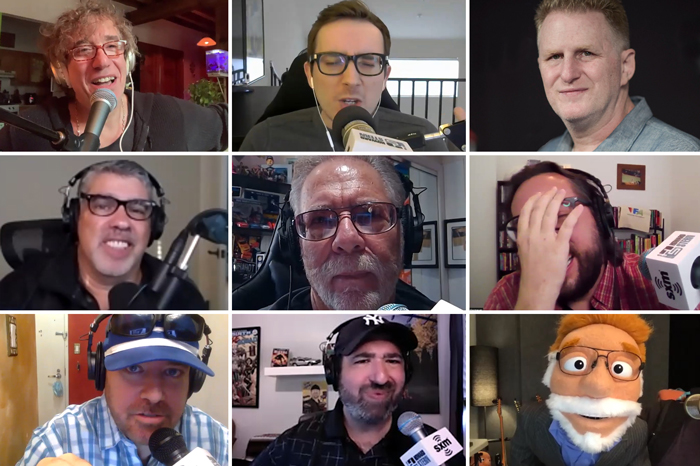 Many on the Stern Show tried to convince Ronnie to share whom he planned to vote for Photo: The Howard Stern Show

“So, I discussed it with Stephanie,” he said, adding his fiancée’s opinion mattered very much to him. “I’m pretty much sticking to my guns. Neither of us care about whether Ralph is gay or not and it shouldn’t be my decision on whether he should come out of the closet … that’s nobody’s business and that’s the way it’s going to be.”

“What?” Howard asked, baffled. “This is the biggest buzzkill ever.”

“You could have been responsible for the greatest moment in radio history,” Howard lamented, adding, “I thought Ronnie would step up.”

“I stepped up all the time, dude. Not this time,” Ronnie responded.

Several of Ronnie’s colleagues were shocked or saddened by his decision, including Jason Kaplan, Gary Dell’Abate, and JD Harmeyer, the last of whom recently said he’d save Ronnie’s life over fellow staffer Jon Hein.

“I admit I’m disappointed, but I see where Ronnie is coming from … He doesn’t want to be told what to do,” JD said, guessing Ronnie was staying quiet because he feared repercussions from certain friends.

Staffer Chris Wilding took Ronnie to task, too. “The fire is gone from Ronnie’s belly,” he said, suggesting Ronnie had chosen his “NASCAR buddies” over his commitments to the show.

“It’s got nothing to do with NASCAR buddies, okay? And at least I got buddies, Chris. You’re not one of them and you never will be,” Ronnie retorted.

“I don’t want to look at this guy … I’m not talking while he’s on the screen,” he continued before temporarily disconnecting from the conversation.

Ronnie eventually rejoined the show and the two sparred for a while before Chris delivered a proposition of his own: he’d deny himself airtime to get everyone answers. “Ronnie always accuses me of liking airtime—and I do, I love airtime, it’s great,” Chris said. “The rest of the year, I’ll stay off the air.”

Staffer Benjy Bronk took things one step further and vowed to come clean about a closely guarded secret of his own: his true age.

That didn’t work either, so Howard took matters into his own hands and got down on his knees to beg his limo driver. “I hate putting Ronnie in this position, but it’s happened,” he said. At one point he even bowed down before him in submission. “All hail Ronnie,” Howard said.

“That made my stomach turn,” co-host Robin Quivers said.

“I’m gonna ask Ronnie one last time … Ron, will you tell us who you’re voting for so Ralph will answer the gay question?” Howard said.

Ralph, off the hook for now, eventually hung up to get on with his day while Howard brought Wednesday’s show to its end. Though disappointed in his limo driver’s decision, Howard assured Ronnie he would never hold it against him.

“Ronnie, I love you. You don’t have to worry, pal. You need me, you call on me. You just know that. I’m always going to be there for you. This doesn’t change that one bit,” he concluded … before singing “You’ve Got a Friend in Me.”