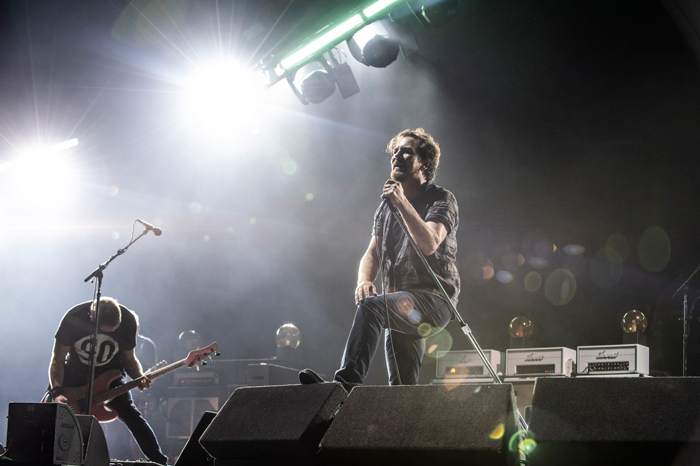 Pearl Jam fans rejoice! The Rock and Roll Hall of Famers are set to play a special invitation-only concert at the world-famous Apollo Theater for SiriusXM … and you could win your way in! Howard will be giving away free tickets to the show on Tuesday to three fans. Think you’ve got what it takes? Test your Pearl Jam knowledge! Call into the live Stern Show at 1-888-9-ASSHOLE for your chance to score tickets!

The special event, taking place just hours ahead of the release of the band’s new album “Gigaton” and before they embark on the North American leg of their Pearl Jam 2020 tour, will air live nationwide on SiriusXM’s Pearl Jam Radio channel 22, now in its 10th year on SiriusXM.

Prize are tickets only. Travel and transportation are not included. See official rules (below).

NO PURCHASE NECESSARY TO ENTER OR WIN.

A purchase will not increase your chances of winning.

The Promotions: From time to time, the Howard Stern Show (“Show”) will conduct promotions announced on air and through other media, such as social media channels, that will ask listeners to call in for a chance to win prizes. In some cases winners will be determined by answering questions or participating in games posed by the Show and others will involve a random drawing from among eligible callers. All promotions and determination of winners are at the sole discretion of the Show.

Sponsor. The Sponsor of these promotions is the Howard Stern Show, 1221 Avenue of the Americas, NY, NY 10020. Promotions may be advertised on various social media platforms such as Facebook, Twitter and Instagram, but no promotion is sponsored, endorsed or administered by, or associated with such third parties.

Eligibility. Participation in any promotion is limited only to legal residents of the 48 contiguous United States, the District of Columbia and Puerto Rico, who are 18 years of age or older. An eligible participant in any promotion shall be considered an “Entrant.” Employees of the Howard Stern Show, Sirius XM Radio Inc. and their respective subsidiaries, affiliates, advertising and promotion agencies, suppliers, retailers or distributors, and members of their immediate family (e.g., spouses, domestic partners, parents, children, siblings), are not eligible to win any prize. Failure to comply with these Official Rules, as determined in the sole discretion of the Sponsor, may result in disqualification from any promotion. All promotions are subject to all applicable federal, state and local laws and regulations. Void where prohibited by law. Participation in a promotion constitutes Entrant’s full and unconditional agreement to these Rules and Sponsor’s decisions, which are final and binding. Failure to comply with these Rules may result in disqualification from a promotion.

Publicity Notice. Entrants selected participate or to win a prize grant to Sponsor their express permission (except where prohibited by law) to use their name, identity, description of prize won, hometown and likeness, if applicable, for entertainment and promotional purposes, in any media now known or hereafter developed, including on the radio, and including for “live notification” of potential winner status purposes, without further compensation.

Prizes. All prizes shall be delivered or provided as described on the Show. Except as otherwise described on the Show, (i) no prize shall exceed $600 individually or $5,000 collectively in value, and (ii) ticket giveaways will not include any travel, transportation or other expenses, including without limitation, personal expenses such as meals, photos and souvenirs, all of which are the sole responsibility of the winner (and guest, if applicable). If the prize is an event, and the event is cancelled for any reason, a prize of equal or greater value may or may not be substituted in Sponsor’s sole discretion. In no event shall more than the number of announced prizes be awarded. All federal, state, local and other taxes, costs and expenses relating to the use, acceptance and possession of a prize is the sole responsibility of the winner.

PRIZES ARE NON-TRANSFERABLE AND MAY NOT BE SOLD OR TRANSFERRED.

Odds. For random draw promotions, the odds of winning depend upon the number of eligible persons responding to the announced promotion.

Winner / Selection / Agreements. Some winners (and their guest) may be required to execute an affidavit of eligibility and right of publicity release and liability waiver. All guest must be at least 18 years of age, unless otherwise permitted by Sponsor. Failure to timely and accurately complete and return these materials to and as instructed by Sponsor or its agent may result in prize forfeiture.

Release. All Entrants, on their own behalf, and on behalf of their heirs, executors, administrators, legal representatives, successors and assigns (“Releasing Parties”), agree to release, defend, indemnify, and hold harmless the Sponsor, Sirius XM Radio Inc., parties working their behalf, and all other businesses involved in a promotion (including prize suppliers), as well as each of their subsidiaries and affiliates and each of their respective employees, officers, directors, agents and representatives, successors and assigns (collectively, the “Released Parties”), from any and all actions, causes of action, suits, debts, dues, sums of money, accounts, reckonings, covenants, contracts, controversies, agreements, promises, trespasses, lost profits, indirect or direct damages, consequential damages, incidental damages, punitive or exemplary damages, including for injury and death, judgments, extent, executions, claims and demands whatsoever, in law, admiralty or equity, whether known or unknown, foreseen or unforeseen, against Released Parties which any one or more of the Releasing Parties ever had, now have or hereafter can, shall or may have, whether known or unknown, asserted or non-asserted, which may in any way arise out of or relate to a Releasing Party’s participation in this sweepstakes or the awarding, acceptance and use or misuse of a prize.

Disclaimer of Liability. The Released Parties shall not be responsible for (i) any typographical or other error in the publishing or printing of the offer, administration of the sweepstakes or in the announcement of any prize; (ii) lost, late, misdirected, damaged, illegible or incomplete entries, or postage due mail; (iii) error, omission, interruption, deletion, defect, delay in operations or transmission, theft or destruction or unauthorized access to or alterations of entry materials, or for technical, network, telephone equipment, electronic, computer, mobile device, hardware or software malfunctions of any kind, or inaccurate transmission of or failure to receive entry information by Sponsor on account of technical problems or traffic congestion on the Internet or at any web site or any combination thereof; (iv) any injury or damage to Entrant’s or any other person’s computer or mobile device related to or resulting from participating in a promotion; or (v) the failure of any third party to comply with the instructions and proper administration of a promotion. Entrants agree that the Released Parties shall not be liable for any injury, including death, loss or damage of any kind caused or claimed to be caused, by participation in a promotion, or from the acceptance or use or redemption of any prize.

Force Majeure. In the event the Howard Stern Show or any of the Released Parties and its agents are prevented from continuing a promotion or delivering or performing any prize as contemplated herein by any event beyond its control, including but not limited to fire, flood, earthquake, explosion, labor dispute or strike, act of God or public enemy, travel ban, power outage, satellite or equipment failure, riot or civil disturbance, terrorist threat or activity, war (declared or undeclared) or any federal, state, or local government law, order, or regulation, or order of any court or other cause not within their control, Sponsor and its agents shall have the right to modify, suspend, extend or terminate the promotion and replace or reschedule delivery or performance of a prize with one of equal or greater value in its sole discretion. IN THE EVENT OF A FORCE MAJEURE EVENT OR WHEN AN EVENT IS CANCELLED, SPONSOR MAY PROVIDE OTHER ELEMENTS OF THE PRIZE OR NONE AT ALL, IN ITS SOLE DISCRETION.

Winners List: A winner’s list for any giveaway in the prior 6 months may be requested by contacting Sponsor at contest@howardstern.com.