Being stuck at home has been understandably frustrating for many since the onset of the coronavirus-induced quarantines, but like with most things late night icon David Letterman has managed to find a silver lining. The comedian and longtime TV star connected with Howard from his “Y2K bunker” on Wednesday and revealed he’s grateful to be spending so much quality time with his teenage son.

“For me it’s great because since Harry started school this is the most time I’ve been able to spend with him, uninterrupted,” Letterman said. “I see this giant figure walking through our kitchen and I thought, ‘Holy crap, we’re being robbed!’ But, you know, it’s my son. You’re just not used to seeing him on a Wednesday shuffling through the kitchen.”

What kind of father-son activities are they enjoying during the quarantine? Birthday haircuts, for starters. “My son, this is what he did for my birthday,” Dave said, taking off his hat and pointing to a place where hair had once been. “He shaved my head.”

“I like it but because we’ve had a chilly spring so far my head does get cold,” he added.

Howard wondered how else the retired “Late Show” host has been keeping busy.

“I’ve been doing a lot of vacuuming and I haven’t done vacuuming since I was 11,” he said. “My main complaint about vacuuming … the one thing in your life that’s designed to suck often just gives up on you and you have to bend over and pick up whatever it is and throw it down the damn sucking tube.” 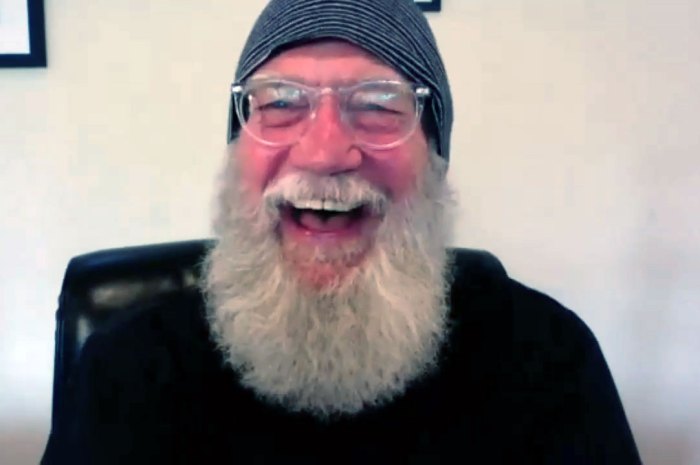 Household chores aren’t the only work Letterman has been known to do during times of crisis, of course. His “Late Show” famously returned to the airwaves less than a week after the country was rocked by the September 11th terrorist attacks. In doing so, as Howard explained on Wednesday, he gave America permission to laugh once more. When Jimmy Fallon joined the Stern Show earlier this month, he admitted Dave’s 2001 return actually inspired him to continue broadcasting “The Tonight Show” from quarantine.

Howard asked Dave if he too would’ve broadcasted from home had the pandemic hit before he stepped away from “The Late Show” in 2015. “I don’t know. I’m not sure how I would’ve handled it,” Letterman admitted, though he said he’s appreciative to those hosts—Howard included—who are currently soldiering on.

While Fallon, Jimmy Kimmel, Stephen Colbert, and several others have now returned to the airwaves, Howard noted that quarantine editions of their shows felt noticeably different without live audiences. He recalled that Dave did something similar in 2012 while broadcasting in the aftermath of Hurricane Sandy.

“We didn’t have a studio audience,” Dave corrected with a laugh. “We hardly had an audience every night anyway.”

But Howard wondered if it was hard for a host to do if they’re used to feeding off a live audience.

“I think I would become accustomed to not having a live studio audience, but I mean Howard, to me, this development for you and others who are doing it is the way to go, honestly,” he continued, adding that one could even wear pajamas on the air if they were so inclined.

Howard and Dave went on to discuss their childhoods and the parts their fathers played in forging the successful men they’d eventually become. Dave said his dad always aspired to be a performer, whether he was rocking a pipe organ in church or scouring the back pages of magazines for random writing opportunities.

“He liked to get up and do jokes. He was a showman,” Dave explained.

His dad could never get a show business career started, however. “He had to do things to make a living to support the family, but that’s not entirely what he wanted and I felt bad for him,” he said, adding, “Most men lead lives of quiet desperation.”

Dave said his father struggled with alcohol abuse for some time before eventually going “all-in” with Alcoholics Anonymous. Dave vividly recalled several anecdotes from that period, including one in which his dad drove the family around while “shit-faced,” another in which Dave accompanied him to an A.A. meeting, and yet another in which he slipped Dave his first taste of liquor when he was just 12.

“My dad was a big fan of a scotch called Cutty Sark,” Letterman recalled. “It was Christmas and we were all in a festive mood, so he said, ‘Here would you like to try my Scotch and soda?’ And I said, ‘Yeah, why not?’ And I did and [thought] whoa, this is tremendous.”

Young Dave soon found himself going back for more. “They kept it under the sink. I would go in there after everyone had gone to bed and … pound down a little Cutty Sark, which really helped.”

“Do you think you were self-medicating?” Howard asked.

Dave said he drank in excess through his college years and also the early days of his entertainment career. He told Howard it got to the point where doctors would point out his swollen liver during routine checkups. All that changed, however, after he landed a new network show and vowed to make the most of the opportunity.

“I got another chance at a TV show and continued to drink and one day I said to myself, ‘I’m not only lucky to be on TV, I’m lucky to have a second chance to be on TV, and the last thing I want to do is be the reason this thing gets screwed up.’” Dave recalled. “I remember I was out at the beach, I think it was May, and that was the last time I had alcohol. I was 34.”

As Dave matured so too did his relationship with his father. “I think kids are typically pretty selfish about their own comings and goings and it wasn’t until he started having heart attacks that I felt really true, strong empathy for his plight,” he said.

His dad never did become a big star, though he did once join his son on TV back when Dave was on the air in Indianapolis. “I had invited him on a show to be a guest and I thought, ‘Wow, I think that was good for both of us’ because I was able to give him that opportunity,” he told Howard.

“That was important to me and I hadn’t thought about that in a long time,” Dave continued, explaining he reflects on their relationship far more often since becoming a father himself.

“Are you a different father to your own son?” Howard wondered at one point.

“I try to be, Howard,” Dave said. “God, I just love having him around. He’s just a goofball and I love him. He’s very entertaining and … I’m very lucky to have my family with me.”

While Dave’s son never appeared on camera Wednesday morning, their dog Dutch did join the show for a few memorable minutes. “Is he a Yellow Lab?” Howard asked.

“That doesn’t look like a poodle,” co-host Robin Quivers laughed.

Dave, whose “Late Show” once featured a beloved segment called “Stupid Pet Tricks,” struggled to get his pooch to obey his commands. As soon as he said “Trumpy is here,” however, the dog began barking. Through some combination of treats and affection, the late night star eventually coerced Dutch into showing off for the camera.

Near the end of the interview, Dave offered words of hope for listeners struggling during the coronavirus pandemic. “Built into the human spirit is a resilience unlike any other mechanism on the planet and this will pass and we will survive,” he said.

Robin wondered if any good would ultimately come from this tragedy and Dave revealed that for him it already has. It’s helped him discover what’s truly important in life: his family. “We have too much as Americans and we take so much for granted and we don’t need it,” he said. “Let’s don’t be so goddamned selfish and so goddamned greedy. We’re all the same, for crap’s sake, and we’re all carbon-based lifeforms and we’re all breathing the same air.”

Letterman shared several heartfelt words with the King of All Media before signing off. “I have nothing but great admiration for the man you are and the man you have become because when you and I were kids we were both two different guys,” he told Howard, adding, “Now how do I turn this device off?”

JD Harmeyer Was Caught Playing Video Games During a Meeting

VIDEO: Gary Dell’Abate Hangs His Wife’s Artwork Behind Him