“I think Gary’s got some competition,” Robin Quivers says after witnessing her co-worker in action 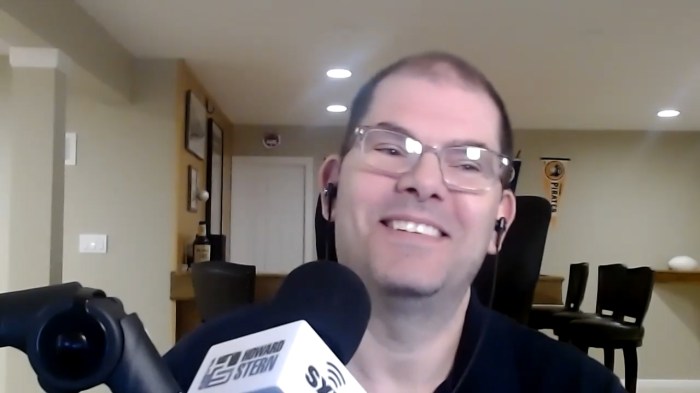 Jon Hein served Stern Show listeners up a sample of his music knowledge on Wednesday morning in a preview of the upcoming battle between him and co-worker Gary Dell’Abate in a hotly anticipated round of Stump the Booey. Considering it will be a high-stakes contest, with the loser forfeiting their Rock and Roll Hall of Fame voting rights for a year, the staff was incredibly eager to get a taste of what was in store.

“Let me see how good you are at this,” Howard told Jon before rattling off some stats. “Gary has been playing Stump the Booey for 19 years and, in the 33 times he’s played, he has 22 wins, 10 losses, and one tie.”

The numbers surprised co-host Robin Quivers. “That tells me that Booey is not infallible. I didn’t realize there were that many losses in his history,” she said.

Howard kicked off the practice game by playing the saxophone-filled intro to Glenn Frey’s “You Belong to the City.” Jon guessed it, no problem. He struggled momentarily with the next offering, Sammy Hagar’s “I Can’t Drive 55”—a song Gary couldn’t name in one of his old games—but ultimately came up with the correct answer. For the next three, Asia’s “Heat of the Moment,” Tiffany’s “I Think We’re Alone Now, and Taco’s “Puttin’ on the Ritz,” Jon didn’t even break a sweat. He finished five-for-five, overall.

“Maybe you’re going to be good at this, man,” Howard said after witnessing Jon’s skills in action.

“I think Gary’s got some competition,” Robin agreed.

Baba Booey was less than impressed, however. “I didn’t think there was anything particularly difficult in there,” he said.

“Yeah, I thought you would’ve gotten all of those, Gary,” Jon agreed.

Robin, meanwhile, worried her colleagues might be too evenly matched. “What happens if there’s a tie?” she asked.

“It might take a whole show. We don’t care,” Howard concluded. “I would only love if it went the whole show.”

Memet Walker Has a Naked Neighbor

AUDIO: Tan Mom Sits Down for a Job Interview