“America is on pins and needles; the stakes have never been less important,” Howard jokes 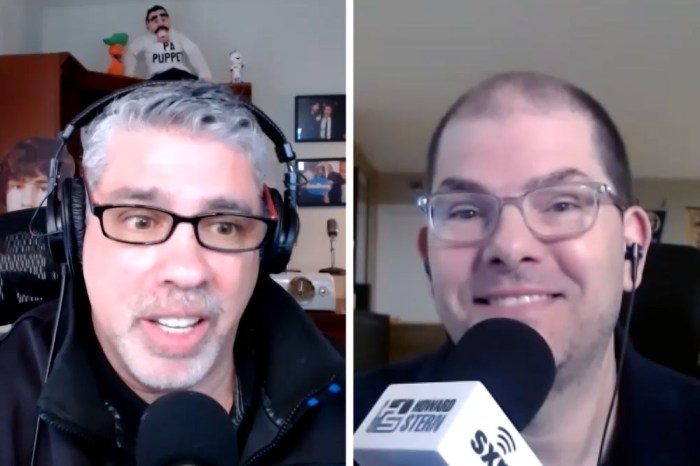 With the staffs’ wagers on record and a practice round in the books, it was finally time for Gary Dell’Abate to come out of retirement Wednesday morning and face off against his friend, colleague, and Wrap Up Show co-host Jon Hein in an all-new round of Stump the Booey.

“Believe it or not we’re actually curious who will win this,” Howard said.

There was pressure on both contestants, as the loser previously vowed to hand over their Rock and Roll Hall of Fame vote to the victor. “Howard, I’m nervous,” Jon admitted. “Robin has pointed out she doesn’t know how I am in pressure, Benjy has got his life’s savings on me, … and I don’t want to embarrass myself.”

Despite having an impressive career record of 33 wins, 22 losses, and 1 tie, Gary was anxious too. “I always get nervous before I play, but once I get on the court I’m good,” he said, explaining he was concerned with maintaining his reputation. “Ted Williams hit a home run in his last at bat. I want to walk away proud.”

“This song peaked at number three in the charts,” Howard said after playing clip number one. “America is on pins and needles. The stakes have never been less important.”

Gary suffered a bit of a stumble out of the gate. He asked to hear the clip a second time in the hopes of jogging his memory, but it was no use. He didn’t write anything down but incorrectly guessed Tiffany’s “I Think We’re Alone Now.”

Robin, who had bet on Gary to win, was dismayed by the so-called music expert’s inconspicuous start. “Uh oh, I’m going to need to figure out how Venmo works,” she laughed.

“I will tell you that this song peaked at number one,” Howard said after playing the next track, a chart topper from 2019 Stern Show guests Def Leppard. “The boys should know this one.”

“Gary, congratulations you’re on the board. But Jon you’re still in the lead,” Howard announced.

The third clip had both contestants scribbling out of the gate. Both guessed “West End Girls,” which allowed the challenger to retain his one-point lead.

“Gary, are you nervous you might not recover? Jon seems to have a vast musical knowledge,” Howard asked with only two questions left to go.

“He’s very good, but it’s usually the fifth song where people who are going to lose falter,” Gary said.

Jermaine Stewart “We Don’t Have to Take Our Clothes Off”

“It’s not a number one song, but certainly popular,” Howard said after playing the fourth clip which had Jon writing for quite some time and Gary picking his pen back up at the last minute to add to his answer.

“Jon’s writing another book that nobody cares about,” Howard laughed.

In the end, both Gary and Jon correctly guessed the ‘80s hit “We Don’t Have to Take Our Clothes Off,” though Howard and Robin took issue with Gary’s sloppy handwriting.

“What the hell does that say?” Howard said. “That looks like hieroglyphics to me.”

Both contestants struggled with the fifth and potentially final song, the Cure’s “Lovesong.”

“I know the band but I’m not sure of the title, so I went with the lyric. I went with ‘I Will Always Love You’ by the Cure,” Jon said incorrectly.

Missing one meant opening the door for Gary to tie things up at the eleventh hour, but Booey stumped himself in the end. “I wrote down exactly what Jon wrote down,” he said.

“You are not right, so Jon Hein is the winner,” Howard announced.

Gary, a vinyl aficionado and former record store employee, was frustrated by his own performance. “It was a terrible showing,” he said. “It doesn’t hurt losing the vote. It just hurts doing so poorly,” he added.

“Jon, how are you feeling?” Howard asked.

“I can’t believe it, honestly,” Jon said. “I want to thank Robin for her lack of confidence in me, I want to congratulate Benjy for his earnings.”

After crowning Jon the winner, Howard let them both test their skills on a few additional songs: Adam Ant’s “Goody Two Shoes,” the Flying Lizard’s “Money,” and Will to Power’s “Baby, I Love Your Way / Freebird.”

Jon got one out of three correct and Gary got two of them right, with Jon missing the “Money” artist and both guys struggling with the exact title of the Will to Power song. Howard wondered if the pressure had just gotten to Gary earlier on, but ultimately it didn’t matter. Jon was still the new champion.

“Jon, you’re now officially that guy when it comes to music,” Howard said.

Gary couldn’t help but agree. “Jon gets the title,” he said.