“I’m sitting on my Toto, getting attacked by ants” the Stern Show host says 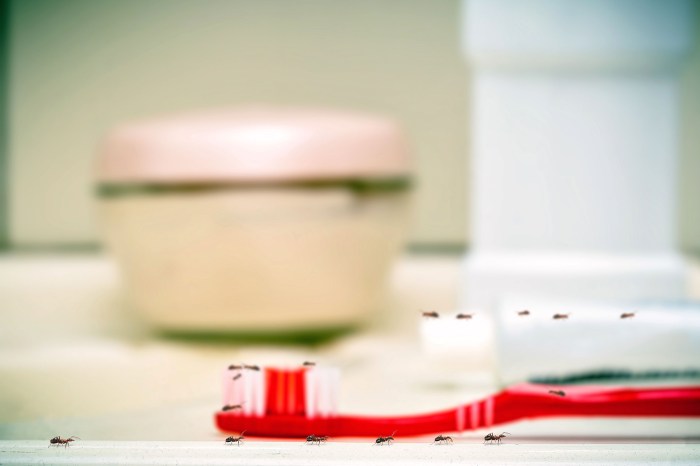 Howard put the “ant” in rant on Monday morning, opening up to his co-host Robin Quivers and the Stern Show’s listeners about a bug infestation he recently discovered in his home.

“I couldn’t wash my hair this morning, Robin, because my bathroom is infested with ants. I don’t know where they’re getting in from. There’s no food in there—they must be eating my toothpaste,” he said, adding, “It’s so gross.”

“There’s always something going on in that house,” Robin responded with a laugh.

Howard said he’s finding the pests crawling around everywhere, from floors and counters to his own arm. His wife Beth cleaned the bathroom thoroughly, but apparently that didn’t do much good. “The ants are out of control. They’ve taken over the whole bathroom. I won’t even go in there,” Howard lamented. “I put on my glasses and there’s ants crawling across my face.”

Since typical cleaning products haven’t kept the bugs at bay, Howard said he’s considered breaking out the big guns. “I want to poison the fuckers,” he laughed, explaining, “I gotta use my bathroom because that’s the only place I have my Toto toilet. I’m sitting on my Toto, getting attacked by ants.”

As Robin pointed out, this wasn’t the first time an ant infestation had seriously bugged Howard. He and his wife previously cut a trip to the Turks and Caicos Islands short after arriving to ant-filled accommodations. “I get in the fucking room—bing, bang, boom, I’m covered in ants … little tiny things just all over my arms,” Howard recalled on Monday.

He asked the hotel to take care of his ant problem, but their solution was worse than the problem. “I come back to the room, they had cans with a skull and crossbones—the place stunk. I said to my wife, ‘They gotta move us.’ They move us to another room, and they got more ants over there!” Howard continued. “Two-day vacation, miserable. You know what I call it? Ants and Caicos.”