“I favor them, that’s it … when you favor something it goes up, you see it,” Stern Show staffer says of his Twitter usage 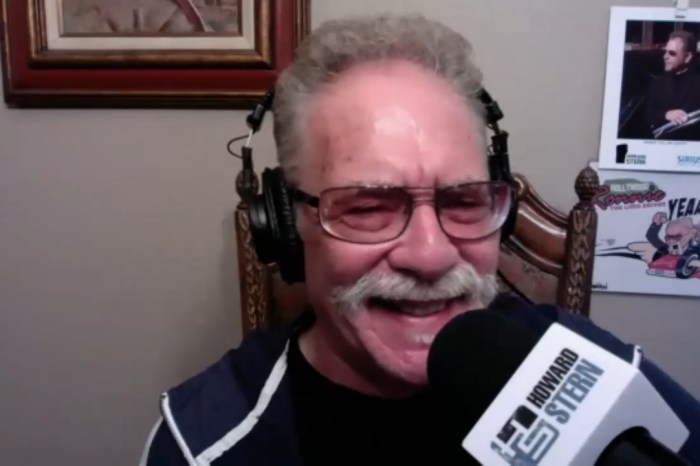 A recent email exchange between Howard and late-night host Jimmy Kimmel about Ronnie “the Limo Driver” Mund’s tweets called into question the Stern Show staffer’s social media practices. “This is a man who knows what he likes and won’t let the world get in the way it,” Jimmy wrote of Ronnie’s weekly “Titty Tuesday” tweets. “What he likes is titties, preferably midweek.”

Upon further inspection Wednesday morning, Howard realized that despite Ronnie’s weekly calls for breasts, he wasn’t sharing his findings with his followers. “What I thought was happening [was] people would send him pictured of girls’ titties and then people could see them and enjoy them,” he noted. “Instead, he puts out Titty Tuesday, and people are sending him girl titty pictures, but he doesn’t share them, he acquires them for himself … it’s all for him.”

In response, Ronnie became quite defensive and attempted to explain how he uses the social platform. “What are you talking about, dude? I put them out,” Howard’s former driver insisted. “I favor them, that’s it … when you favor something it goes up, you see it.”

“You don’t even know what you’re doing with that thing,” Howard countered after Ronnie not only improperly explained how Twitter works, but also failed to properly identify the practice of “favoriting.” “You don’t know how to do Titty Tuesday.”

Things didn’t go much better when it was clear that Ronnie—who moved out to Las Vegas over the summer—had still not yet moved into his permanent home and was without his own furniture. “Are they delivering that with a covered wagon or something?” Howard jokingly asked his staffer.

“Sounds like Vegas is great,” Howard responded after the blow up. “It really mellowed you out.”

VIDEO: Howard Can’t Stand When Audiences Sing Along at Concerts