“I’m not getting any younger and I’m getting older by the year … and a lot of people she used to go out with are dead now,” Wack Packer says of companion Melody 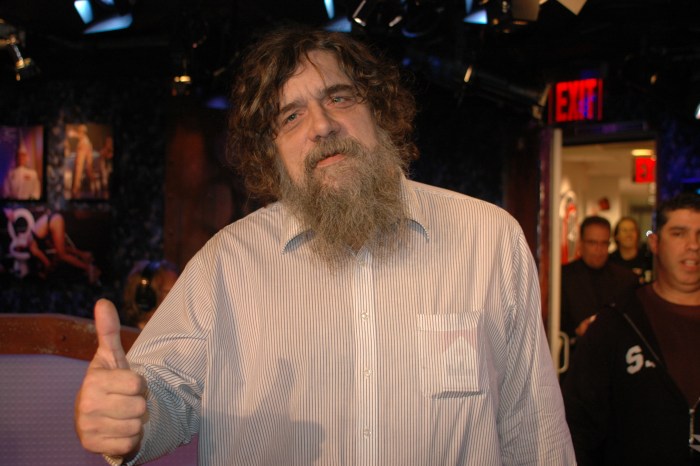 Will there soon be a Mrs. Bigfoot?

On Wednesday, Howard played an interview Stern Show correspondent Wolfie recently did with Bigfoot and, right off the bat, the Wack Packer made a shocking revelation. “I’m thinking about marrying a girl that really loves me a real lot,” he confessed of his companion and “soulmate,” Melody. “I’m not getting any younger and I’m getting older by the year … and a lot of people she used to go out with are dead now.”

“We’ve been talking about it,” Melody told Wolfie herself of the possible union. “I think he needs somebody to love him, and I need somebody to love me too, and it would be nice to have a man around to help me out and hang out.”

Though the couple have been on and off for nearly 30 years, until recently they hadn’t seen each other in over 20. When asked about their physical relationship, Bigfoot didn’t hold back. “She’s a great lover. She lays there and let me put it right to her and she [doesn’t] complain about it,” he explained. “She [doesn’t] complain and say, ‘Oh, you owe me this, you owe me that. Like some girls after I’ve had sex with them say, ‘Oh, you owe me $100.’”

Melody was equally as candid. “He has a good dick. Girls would love to have their husband have something like that,” she said of Bigfoot before noting his prowess in the doggy style position. “He can really ream it good.”

And while Bigfoot has opened up in the past about a sexual encounter with a local mailman, Melody was able to elaborate on it. “This postman dude … walks in, drops his pants … [and] he’s like, ‘Go grab the Crisco out of the refrigerator,’” she remembered. “The dude got on the couch, and he puts his ass up in the air with his knees on the couch and his head down into the couch and Bigfoot keeps reaming him.”

“People say why is the post office having all of these delays —now I know why,” Howard joked.

Sex with mailmen aside, Melody listed some of Bigfoot’s best qualities. “He’ll do anything I want him to do, and he’ll bring me anyplace I want to go, and he spoils me really good,” Melody said.

Bigfoot went on to say that, while Melody has had trouble with men in the past, as her protector that will no longer be the issue. “She’s been hurt so many times by certain people,” he said before turning his attention to his lover. “Nobody will ever mess with you again.”

There might be a small problem between Bigfoot and Melody even before they tie the knot – the Wack Packer doesn’t seem to know what her first name actually is. While talking with Wolfie, Bigfoot continuously referred to his girlfriend as “Melanie.”

“Would you be shocked to know that isn’t her first name?” Wolfie told him. “Her name is actually Melody, like a song.”

“I just called her that name for years!” Bigfoot explained.

Courteney Cox Shares Stories About Ghosts, Dancing With the Boss, and How She Met Her Man Thanks to Sacha Baron Cohen