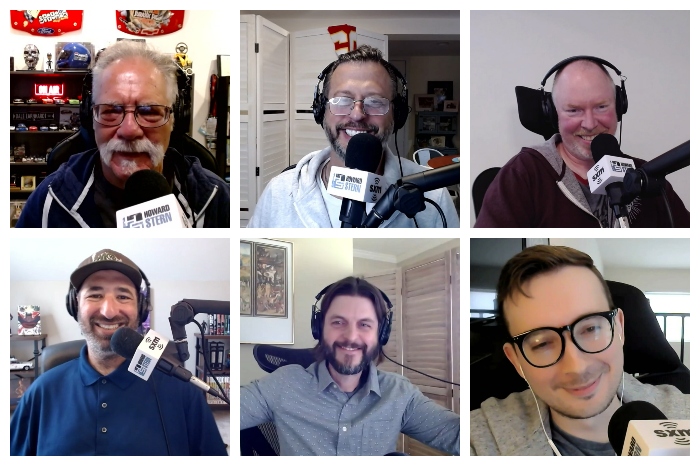 “I’ve never been caught because I’m like a ninja when I do it,” Howard joked before getting started. “I always lock doors … I was always careful.”

See how Robin and Erik fared and how well you know the staff (below).

Robin instead went with Richard—and was wrong. “I didn’t think about his pubic hair and how old he is,” Robin said of Ronnie, who wound up being the correct answer.

“[My] fucking dick would go straight up watching this shit … We didn’t get naked, but we opened our pants and we had our pants, and we had our pants down a little … just enough for your dick to come out,” Ronnie recalled of the several instances he and his friend watched their neighbors, before detailing the time they were caught by his friend’s brother. “One day he came home from work and we’re fucking laying there both jerking off … It was just embarrassing … we didn’t even know he walked in, that’s how far we were into this whole thing.”

Next up was the time a staffer was interrupted when his son and another young family member ran into the bedroom of the vacation home he was staying in.

“I would have to say Sal because Sal’s kids are older than Will’s kids,” High Pitch suggested.

“This would be most surprising if it was Will … I’m going to say Will,” Robin guessed correctly.

“He burst in, and I screamed just like ‘Get out of here, get out of here’ trying to cover up the best I could,” Will said of his son. “I was [lying] in bed … I think I was fully nude … I was full boner.”

While Will isn’t certain his son knew what was going on, he has his suspicions. “He was a little sheepish,” the staffer remembered. “I told my wife about it … We were like, ‘Let’s never talk about this again.’”

Robin’s answer was at least partially based off who she knew it couldn’t be—Chris Wilding. “I don’t know much about Chris’ family background … I really don’t think he had a toy box in junior high school, I think he was more sophisticated than that so I’m going to say it’s Jason,” she said.

Erik wound up being right. “The reason I would hide in there is because I had a neighbor who was really into like the ‘Rambo’ movies and [he] and his friend, they would put camouflage on at night and peek into my bedroom window and scare the shit out of me and I was always terrified,” Richard explained of choosing the peculiar location. “I’d jump in there, take my clothes off, take my underwear off and just beat off in complete darkness.”

On the day he was caught, Richard’s mom came into his room and kept calling for him before he finally revealed himself. “It must have been like Dracula opening up his coffin. The lid slowly opens up and I’m in my underwear and she’s like, ‘What are you doing in there … Are you doing drugs?’” he recalled. “I was like. ‘Yeah, yeah, I was doing drugs.’”

“There was a white substance, but it wasn’t drugs,” Chris jokingly added.

This Person Ejaculated While Their Mother Was in the Same Room

When Robin heard the next story, which featured a staffer continuing to ejaculate despite his mother walking into his bedroom to use the family computer, she was stunned. “This is too much,” she stated before guessing the culprit was Sal.

Both contestants wrong, the answer was indeed Chris Wilding.

This Person Accidentally Ejaculated Into His Own Soda

Though he didn’t technically get caught, the next staffer accidentally drank his own semen to avoid his wife walking in on him. “I don’t think Sal drinks soda but Jason used to drink soda, so I’ll have to go with Jason Kaplan on this one,” Erik said of the remaining choices.

“I know that Sal has been caught other times by his wife … and Jason has been surprising me too with how pervy he is,” Robin pointed out. “I’m not piggybacking off High Pitch but I’m going with Jason too.”

“We know how large Sal’s load is so it could change the taste of a soda,” Robin marveled in response.