As they did last year, JD Harmeyer’s Cincinnati Bengals are facing off against Richard Christy’s Kansas City Chiefs in the A.F.C. Championship Game and on Tuesday morning, Howard came up with some interesting stakes. “Whoever loses, you put on a dress and a wig and lipstick and you kiss Ronnie — that’s a good bet,” he told his two football-fanatic staffers.  “Now you’ve got something on the line.”

While JD reluctantly agreed to the wager, he was compelled to set some parameters. “I’m not going to tongue kiss him, but I will kiss him,” he insisted.

“You’re not going to have a choice. Once Ronnie grabs your head, he’s stabbing that tongue right down your throat,” Richard joked in response.

When co-host Robin Quivers suggested the entanglement go on for at least 15 seconds, Howard agreed. “You’ve got to give Ronnie some time to work his magic,” he pointed out.

“If I’m going to do this, I’m going to do it right,” Ronnie responded before insisting Richard demonstrate proper hygiene if he loses the bet. “Yeah, it’s going to be really weird … Use mouthwash and shit.” 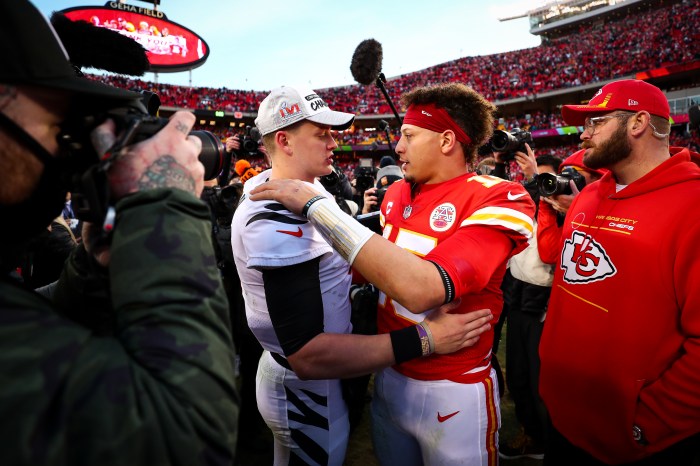 Quarterbacks Joe Burrow of the Bengals and Patrick Mahomes of the Chiefs after the 2022 A.F.C. Championship Photo: Getty Images

Despite the Bengals having won their last three contests against Kansas City, JD remains less than confident. “This is the story of a Cincinnati fan’s life,” he said of his reluctance. “You’re just waiting for the other shoe to drop.”

“I’m excited because I know the Chiefs are going to win,” an enthusiastic Richard countered. “I can’t wait to watch JD make out with Ronnie.”