The 42-year-old police constable just had an urge to swallow them, authorities say 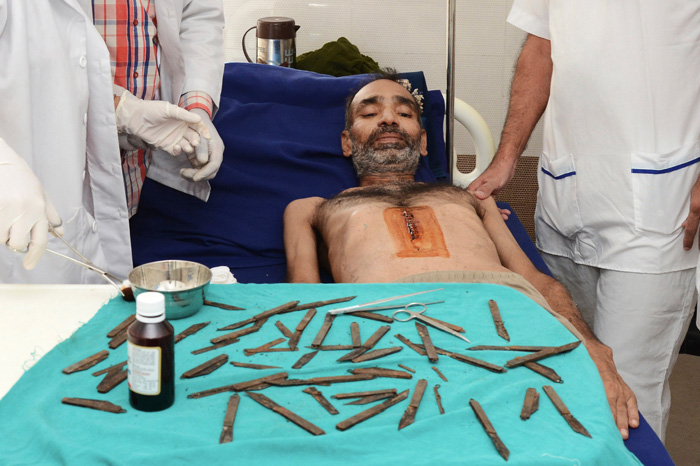 Doctors in Amritsar, India recently removed 40 knives from the stomach of an Indian man had who had purposefully swallowed them over the course of two months, according to an Associated Press report in the Los Angeles Times.

The 42-year-old patient underwent a five-hour procedure at a hospital in Punjab to remove the knives. The exposed blades — some as long as seven inches — caused “massive internal bleeding” during surgery, but the operation was successful.

“In my 20-year career, and in all the medical literature that we checked, there has never been a case like this one, where a person has swallowed not one, but 40 knives,” Dr. Jatinder Malhotra, a critical care doctor who assisted on the operation, told the A.P.

The knife swallower, who works as a police constable, told doctors he ingested each knife along with a glass of water, but did not reveal why — except to say he had an “urge.” He later went to the hospital, complaining of severe abdominal pain.

Doctors ran tests and at first suspected a tumor, but the culprit was later revealed to be well over a butcher’s dozen of knives.

The patient has reportedly been diagnosed with a psychiatric disorder and is now being counseled, but Malhotra said he can no longer stomach looking at knives: “He even asked his wife to get out of the room when she was cutting some fruit for him.”

Click here for the rest of the piercing story.