The music legend is collaborating with superstar producer Greg Kurstin 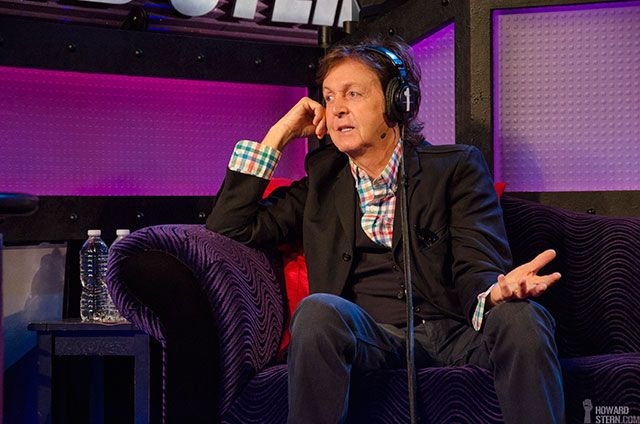 Sir Paul McCartney on the Stern Show in 2013 Photo: The Howard Stern Show

Even at age 74, Sir Paul McCartney shows no signs of slowing down.

On Saturday the Beatle revealed he is working on a new studio album. It will be his first since 2013’s “New,” which he promoted with a visit to the Stern Show.

“I’m making a new album, which is great fun. I’m in the middle of that,” Paul told BBC Radio 6’s Matt Everitt, according to the Hollywood Reporter. “I’m working with a producer who I first worked with two years ago on a thing, a piece of music I’m doing for an animated film, and since then he went on to work with Beck and got best album of the year. Then he went on to work with Adele. He just got song of the year, record of the year with Adele. And just got producer of the year.”

The producer is Grammy-winner Greg Kurstin, who as of late has enjoyed the Midas touch within the industry. Paul acknowledged that working with Greg might draw ire from critics. “My only worry is people are going to go, ‘Uhhhhh, there’s Paul going with the flavor of the month,'” Paul said. “You know, I suppose you always think the worst of it. But he’s a great guy. Greg is musical and he’s great to work with.”

Paul has been no stranger to contemporary collaborations in recent years, from working with Kanye West and Rihanna to teaming up with the surviving members of Nirvana. Paul also recently collaborated with fellow ex-Beatle Ringo Starr on Ringo’s upcoming album.

Kurstin, meanwhile, appeared on the Stern Show in 2014, accompanying Sia on piano for an in-studio performance.

Paul’s revelation comes on the heels of an archival reissue of his 1989 album, “Flowers in the Dirt,” featuring songwriting collaborations with Elvis Costello. A release date for Paul’s new album has yet to be announced.