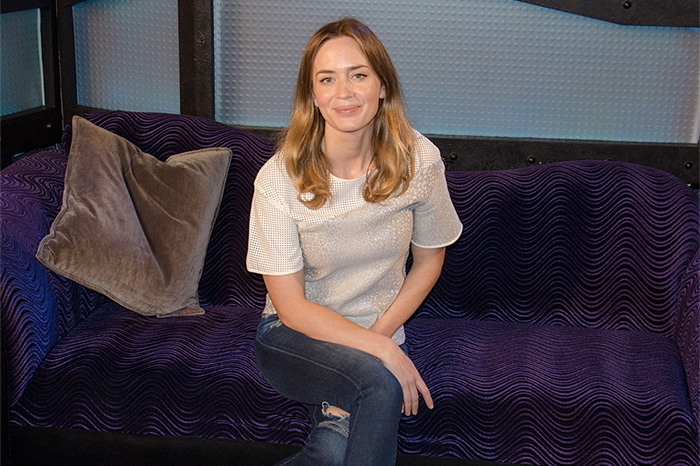 Emily Blunt during her first visit to the Stern Show in 2015. Photo: The Howard Stern Show

Stern Show guest Emily Blunt and her husband John Krasinski are teaming up for a supernatural thriller called “A Quiet Place.” It will mark the first time the couple has starred alongside one another.

Krasinski will direct the low-budget, farm-set film about a family being terrorized by evil. He’ll also co-write the script with Scott Beck and Bryan Woods, with Platinum Dunes producing.

Though Krasinski is best known for appearing on screen, most notably during his long run on NBC’s “The Office,” he has directed two prior films (“The Hollars” and “Brief Interviews With Hideous Men”). More recently, he has begun to transition from comedic actor to bonafide action star, with turns as an ex-military contractor in “13 Hours: The Secret Soldiers of Benghazi” and as the titular hero in Amazon’s upcoming “Jack Ryan” series.

Blunt, meanwhile, has starred in “The Huntsman: Winter’s War” and “Girl on the Train” since making her Stern Show debut in 2015 just before the release of her Oscar-nominated film “Sicario.” Next up, she’s playing Mary Poppins in Disney’s highly anticipated “Mary Poppins Returns.”