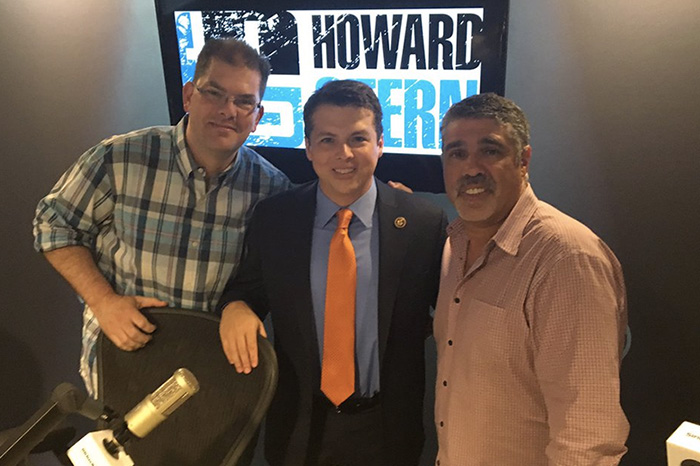 U.S. Congressman Brendan Boyle is a longtime Stern Show fan, even opening up his Monday Wrap Up Show appearance with a “Baba Booey” and “Hit ’em with the Hein.” But he told hosts Gary Dell’Abate and Jon Hein he’s not the only elected official who loves and regularly listens to the Stern Show.

“[President ] Trump right now is dominating most of the conversation, but even back when I was in the State House in Pennsylvania you will have people who—you know—you might make a [Stern Show] reference or something and then you realize the person’s a fan, too. And there is sort of that moment of recognition.”

The Democratic representative from Pennsylvania’s 13th district said finding other Stern Show fans can have political benefits, too. He told Gary and Jon it creates a bonding moment between lawmakers, adding, “especially if you have someone on the other side of the aisle.”

As the conversation shifted toward Ronnie’s upcoming appearance alongside Sandler and Chris Rock in “The Week Of,” Congressman Boyle offered an explanation for why longtime listeners—in either politics or entertainment—might invite Stern Show staffers into their world.

“The show has been on so long—I’m 40 and started listening as a teenager … There are enough people now that are at a certain level in entertainment or in government that are just big fans of the show and probably it’s exciting for them as longtime fans to have that sort of connection,” he said.

Does that mean Congressman Boyle is open to having Ronnie by his side in D.C.?

“Do you have any Flat Ronnie’s left?” he joked. “I think my Congressional office could use a Flat Ronnie.”