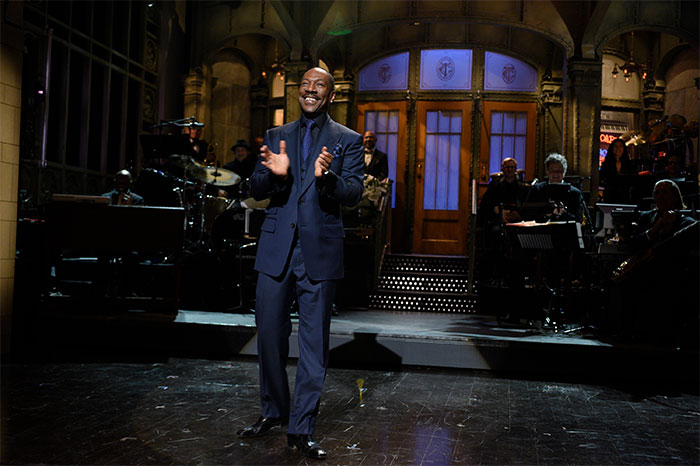 “Saturday Night Live” announced its first group of hosts and musical guests for the sketch-comedy show’s upcoming 45th season. Murphy, a legendary “SNL” cast member from 1980 to 1984, will be taking the reins on Dec. 21.

It’s the Hollywood icon’s first time hosting his old show since 1984, though he did return to the stage for a cameo during the show’s 40th anniversary special in 2015. It was a newsworthy appearance which Howard and Eddie’s former “SNL” co-star Dan Aykroyd discussed at length during an interview just a few days later.

Season 45 will kick off with repeat Stern Show guest Woody Harrelson who hosts on Sept. 28 alongside musical guest and singer-songwriter Billie Eilish. Other names revealed Monday on Twitter include Kristen Stewart (“Charlie’s Angels”), who hosts Nov. 2, David Harbour (“Stranger Things”), who hosts alongside Camila Cabello on Oct. 12, and Phoebe-Waller Bridge (“Fleabag”) who hosts with musical guest Taylor Swift on Oct. 5.

Woody, who joins “SNL” a few weeks before fighting the undead in “Zombieland: Double Tap,” and Stewart, who appears before the release of her “Charlie’s Angels” revival, have both hosted the late-night show previously. Harbour and Bridge, meanwhile, will be making their debuts. On the music side, Swift has graced Studio 8H with her presence on multiple occasions while Cabello and Eilish are both first timers.

“SNL” is nominated for 18 Emmys this year. While Murphy’s much-anticipated return to the series will surely be an event to behold, it’s just one portion of the storied entertainer’s 2019 comeback. He’s also reportedly headlining a new Netflix stand-up comedy special and starring in the streamer’s Rudy Ray Moore biopic “Dolemite Is My Name,” arriving this fall.