Musician, rapper, and actor makes his Stern Show debut ahead of his new pop-punk album “Tickets to My Downfall”

A hangover earned while playing beer pong with Post Malone couldn’t keep Machine Gun Kelly from getting up early on Wednesday morning and baring his soul to Howard during his Stern Show debut. The 30-year-old rapper, rocker, and actor let listeners in on every aspect of his life, from his deep connection with the universe to the high-profile feuds, friendships, and lovers which generate headlines nearly every single day. The Cleveland native also shared a slew of wild stories about drugs and alcohol, opening up to Howard at one point about hitting an inside-the-park home run while tripping on acid at a celebrity softball game.

“Is there any part of you that says, ‘I could fuck up my career right now if I go out there on acid?’” Howard asked. “Or do you just throw all caution to the wind?”

“I’ve already fucked up my career so many times at this point,” Machine Gun Kelly, born Colson Baker, responded. “If you are out here expecting me to just go by the book, then you’ve hired the wrong person. If you want me there just let the good times roll and I’ll just hit a home run on acid and we’ll call it a day.”

Dropping acid that day wasn’t even Machine Gun Kelly’s idea, however. He told Howard one of his straight-laced celebrity teammates actually suggested it. “That’s the craziest part of this story,” he said. “The only reason why I did it is because this person, of all people, turns around and … holds out a Ziploc bag of these two tabs of what ended up being acid.”

MGK regaled listeners with scores of high-octane adventures on Wednesday, from losing his driver’s license after attempting a stunt he saw in “Fast & Furious: Tokyo Drift” to holding his own while drunk guys keep picking fights with him at bars.

“Do you think you have a death wish?” Howard asked.

MGK paused before answering. “I don’t fight it,” he said.

“I am afraid. I am lately, actually, because I have a lot of things to live for now, I have my daughter,” he responded.

In addition to his relationship with his daughter, Machine Gun Kelly also has a burgeoning romance with actress Megan Fox as well as an impressively dynamic film and music career.

His fifth studio album, “Tickets to My Downfall,” arrives Friday. The guitar-driven effort likely isn’t what the world expects from a man who found fame by winning back-to-back rap contests at Harlem’s Apollo Theater, but to him that’s part of the appeal.

“I just want to go against what everyone else thinks,” he said at one point. “I make a pop-punk record … and everyone’s like, ‘You switched genres!’ To me, I just added on to the multiple things I’ve already done anyway, but, sure, what a narrow-minded way to look at things.”

Howard wondered if the album’s title “Tickets to My Downfall” meant he thought the world was waiting for him to fail—so he might as well sell tickets to the show.

“That’s exactly what the title means,” MGK said, before explaining how his career sometimes reminds him of a blimp. “The Goodyear blimp is just up there. It’s cool to look at once or twice and then you forget that it’s up there, but if that thing catches on fire and starts falling to the ground we’re all going to be like, ‘Oh, wow, look at that,’” he said. “We just want to see it crash and burn.”

The musician and actor does have several people rooting for him, of course. In addition to finding love with Fox he’s found a reliable friend in “Saturday Night Live” star and repeat Stern Show guest Pete Davidson.

“I don’t have any siblings, you know, so when you see someone like Pete, that’s like my little brother [and] my best friend, too,” he told Howard.

The two grew close while shooting the Mötley Crüe biopic “The Dirt.” “We went out for a night in New Orleans together. He was the only other person who smoked weed on the cast, so we bonded over that at first,” he said with a laugh. “I took LSD and we went out and I was like, ‘This dude is out of his goddamned mind.’”

“It was just like the weirdest, most awesome relationship,” Machine Gun Kelly said.

Howard wondered how their friendship changed when Pete got engaged to pop star Ariana Grande. “Were you shocked? Like, ‘Shit, I know Pete and all of a sudden he’s America’s sex symbol?’” he asked.

“I remember when like the Ari thing happened. I looked at Pete and I was like, ‘Man, the average American dude is very proud,’” MGK recalled. “He was just like a symbol of hope.”

Howard predicted his guest would one day marry Megan Fox, and he wondered if Pete might be his Best man.

Shooting “The Dirt” with Pete was fun, but landing the role wasn’t easy. He auditioned for the film six times before getting cast as the band’s hard-partying, amateur-porn making drummer Tommy Lee.

“Did you hang with Tommy Lee to get into the part?” Howard asked.

“For sure!” he responded. “One, I would just flop the script down on his desk and be like, you know, ‘Did all this really happen?’”

“The other stuff was his mannerisms, the goofy stuff, when he would just stick cigarettes in his nose and somehow get smoke to come out of his esophagus,” he continued before breaking into his impression of the legendary rocker.

“He’s like a Jedi Master. He’s teaching you the ways of Tommy Lee,” Howard laughed.

Tommy Lee isn’t the only drum legend Machine Gun Kelly has palled around with, either. He’s also close with Blink-182’s Travis Barker, who in fact produced “Tickets to My Downfall” and collaborates on some of its songs. MGK has listed Blink-182 as one of his biggest musical inspirations along with rapper DMX and Eminem, the latter of whom he’s publicly feuded with for years.

“Does it personally pain you that you have this fucking feud with this guy?” Howard asked.

“I don’t feel any type of way about it,” Machine Gun Kelly responded. “I’m like asleep on my tour bus and this fucking guy drops a song with like three songs consecutively talking about me. What the fuck you think I’m going to do, just fucking roll over and go back to sleep?”

“I said what I said. Respect the fight and that’s it,” he continued.

Eminem isn’t the only celebrity MGK has feuded with since moving to Los Angeles. He also clashed with several neighbors—including Bravo star Jeff Lewis—after throwing loud parties and parking in front of their bushes.

“Are you a good neighbor?” Howard asked.

“I’m a terrible neighbor, Howard,” Machine Gun Kelly admitted. “In the garage is like an entire motorcycle shop. They’re building a motorcycle right now and they test this thing … at like 2:30 in the morning.”

“Do they ever call the police on you?” Howard wondered.

Lewis was apparently so upset by the constant partying that he brought his beef with Machine Gun Kelly up on his SiriusXM show. Thankfully, MGK knew just how to smooth things over. “I sent a Dom Pérignon bottle over on a skateboard,” he said, explaining the bubbly seemed to ease their tensions. “I want to be a good neighbor,” he added.

If parties, cops, and uptight neighbors weren’t enough, MGK told Howard his house may also be haunted. One time he found a six-pointed star inexplicably carved into his floor. “We were like, ‘Whoa.’ We spent the whole night looking at it,” he said, explaining it disappeared before Megan could come over to investigate it.

Machine Gun Kelly isn’t sure what the star was about, but he told Howard the universe does sometime send him messages. One example he shared involved shooting stars reminding him of the deceased aunt who helped raised him. He told Megan about it while they were vacationing in Puerto Rico and all of a sudden the two saw multiple shooting stars sail through the sky.

“Right after that a toad came and like sat with us and just  looked at us while we ate dinner outside,” MGK recalled. “I was like, ‘Man, what are you telling me?’”

In addition to the frogs and shooting stars, he said a hurricane was also headed their way. Not wanting his time with Megan to come to an end, he bared his soul to the tree and asked it to help move the hurricane. Sure enough, the hurricane ravaged a different island the next day. “There’s just this god energy all around,” he said.

His aunt’s death isn’t the only one Machine Gun Kelly has had to endure in recent years. His father also passed away in July. He told Howard the two weren’t always close, but they reconciled toward the end thanks in part to a bottle of booze and a Neil Young singalong.

“We drank whiskey together,” he recalled. “I snuck a bottle in the hospital. We were having this drink and I was asking questions about my birth. I was encouraged to find things out about myself.”

It was in the hospital he realized they both loved the same live Neil Young song: “Old Man.”

“I was like, ‘You do?’ He wasn’t much of a rock ‘n’ roll guy, so, like, we played the song on my cell phone and we sang it and we were just drinking whiskey,” he recalled. A few days later, Neil Young came on the radio while he was driving and Machine Gun Kelly said the song somehow turned itself up.

“I’m glad you got to at least spend some moments with your dad,” Howard said.

MGK agreed, though he wished he had someone to call after his performance at last month’s Video Music Awards. “It would have been nice to have someone around for all these moments that are happening right now,” he said. “It would’ve been cool to call somebody and be like, ‘I did something.’”

“You were great at the VMAs. You did a great job,” Howard assured him. “Your old man would be proud of you. You’ve got a lot to be proud of.”

As far as Machine Gun Kelly was concerned, the universe hasn’t finished working its magic. This time, instead of changing the weather or sending him messages from the great beyond, it’s helping him put out a one-of-a-kind record. First, COVID-19 concerns in March pushed back the album release and gave him more time to add in some of his favorite songs. After that, “Tickets to My Downfall’s” cover art was scrapped at the eleventh hour which led to a last-minute photoshoot with multi-hyphenate Mod Sun and, ultimately, a new album cover which Machine Gun Kelly greatly preferred.

“There’s something really special around this album happening because the universe won’t let it come out wrong,” he told Howard. 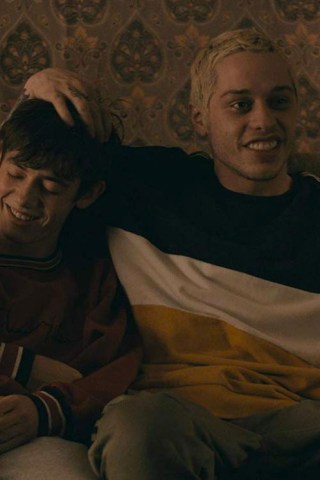 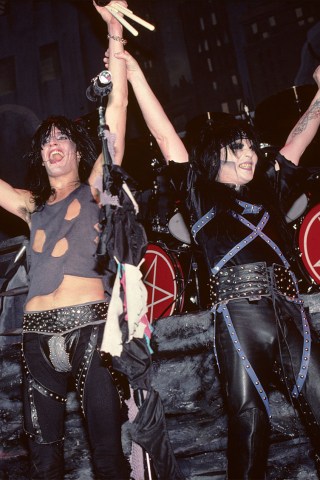