Chris Rock on Forgiving Bullies, Flaunting His Abs, and How He and Dave Chappelle are the Jay Z and Kanye West of Comedy

Actor, filmmaker, and world-class comic Chris Rock has lived nearly his entire life with his head on a swivel. The 55-year-old “Fargo” star and upcoming “Saturday Night Live” host was conditioned to expect the worst at a young age while enduring physical and emotional torment at the hands of relentless (and racist) schoolyard bullies. The childhood trauma coupled with self-esteem issues and a recently diagnosed nonverbal learning disorder forced him to become vigilant, even trepidatious. In recent months, however, thanks to a combination of therapy, diligence, and self-discovery, he finally figured out how to stop being afraid.

“I used to walk around with a fear. I used to have, like, this squirrel-like energy. You can’t sneak up on a squirrel,” Chris told Howard on Monday with a laugh.

“Are you agoraphobic?” Howard asked.

“I’m a work in progress. I just got to the point where I’m like, ‘It’s going to be okay. No one is going to grab you and no one is going to demoralize you,’” he continued. “This is only in the last six to eight months where I’m not like thinking some horrible shit is going to happen to me.”

Considering what happened to Chris as a child, one could argue his fears were well founded. He told Howard he was one of the only Black students in a recently integrated school system where teachers spoke down to him and his white classmates were cruel to him every single day.

“It was just a horrible existence. The closest character I can relate to is Tim Robbins in ‘The Shawshank Redemption,’ you know what I mean? Like, every day was hell,” he recalled. “I had 700 days of being in jail … I got fucking my ass beat and I got physically fucked up.”

Decades passed, but Chris still remembers the names and faces of his tormentors. Thankfully for those who wronged him, the beloved entertainer has no thirst for revenge and little interest in relitigating the past. “You know how easy it would be for me to like get on Instagram or whatever and hold up a class picture and go like, ‘This guy called me [n-word], this guy beat me, this one spit in my face’?” he told Howard. “It would be so easy and I could destroy all their lives, but that would be bad in the sense that I would be assuming these people haven’t changed.”

As fate would have it, one of his former bullies worked security on “Top Five,” a movie Chris directed and starred in. He could’ve easily fired the man but instead he turned the other cheek. “His sin had punished him. He could’ve been my friend. He could’ve been in the trailer with us watching ‘The Godfather,’” Chris recalled. “The fact that he had to go through that whole day … and watch me in all my glory and to be so close to me yet so motherfucking far, you know? I didn’t have to do anything.”

These days, Rock does more than just watch gangster movies. He also stars as a Midwestern mobster on Season 4 of Noah Hawley’s anthology crime series “Fargo,” which debuted Sunday night on FX.

“You know what? It’s fucking great,” he told Howard with a laugh, later adding, “It’s the best shit I’ve ever done.”

Chris has been acting since the 1980s, but his approach to the craft changed dramatically a few years back after working with mega-producer Scott Rudin on the Tony-nominated Broadway play “The Motherfucker With the Hat.” “[Scott] got me with this guy Larry Moss, who’s like kind of the best acting coach in the world,” Rock said. “He’s instilled in me some things that have helped me out, that have taken my acting up another notch—and I love it.”

“Did you have to audition for this [‘Fargo’] role?” Howard asked.

“I didn’t audition for it and after my special ‘Tamborine’ on Netflix, that special made people look at me a different way. It’s like, ‘Oh, he’s a fucking grown-ass man,’” he said. “Your whole life’s an audition for something.”

While Chris’s approach to acting has improved, his approach to fine-tuning his comedy routines has grown more complicated. These days, it’s nearly impossible for him to practice material without audience members recording his set and sharing it with the world. “No comedian should be judged on what they do in a club,” Chris said, adding, “When we’re in the clubs, those are demos, man. Those are demos. You wouldn’t take Prince’s demos and go, ‘This sucks!’ I’m just working on this shit. I’m in the gym.”

Workshopping material has become even harder with comedy venues closing due to the pandemic. As a consequence, Chris will be forced to debut unproven material this weekend on “Saturday Night Live.” “We’ll see how this works out. This is going to be my first ‘SNL’ monologue I don’t rehearse,” he said, though he assured Howard he still feels “pretty optimistic.”

While Chris doesn’t want the world getting an early glimpse of how his comedy sausage is made, he’s far less concerned with other comics cribbing his material. “You can’t take my shit. My shit is like those smart guns, it only works with your fingerprint,” he said. “It just doesn’t work for other people.”

Borrowing and lending is fair game, however. Chris told Howard he has previously offered up jokes to friends, including fellow “SNL” alums Jimmy Fallon, Seth Meyers, and Michael Che. Likewise, comedians ranging from Jay Leno to Bill Cosby have also shared their jokes with him. “There’s this myth I can say anything and get away with it … sometimes it’s a good joke and sometimes it’s just like racist or sexist,” he explained with a laugh.

Rock spoke at length Monday about his many stand-up influences, contemporaries, and heroes, including Richard Pryor, Cosby, Ellen DeGeneres, Joan Rivers, Rodney Dangerfield, Phyllis Diller, George Carlin, and Sam Kinison. “I always get compared to like Eddie and Pryor, but my comedy is more like Carlin and Kinison,” he observed.

He praised Ellen as both an all-time great and a trailblazer. “She’s the gay Rosa Parks,” he said. “She’s just a bad motherfucker, but on top of that she’s a master comedian.”

Likewise, he said Rivers was “one of the funniest people to ever roam the earth.” “She took every appearance absolutely serious,” Chris said. “‘Ooh, I’m on the fucking Home Shopping Network, I don’t give a fuck. I’m going to kill. No matter where I’m at, I’m Joan Rivers and I throw the fuck down. She never took the night off.”

At Howard’s request, Chris also explained what differentiated hacky comedy from the kind of genius one gets from the likes of Jerry Seinfeld and Dave Chappelle. “Here’s the thing: Art is subjective, comedy is subjective, but killing on stage is not,” Chris explained. “Now, if you kill using nothing but hack, stock material, you my friend are a hack. But, if you can kill, if you can get that same laugh as a hack with an original thought, than you’re a bad motherfucker.”

“You get graded on your degree of difficulty,” he continued. “You watch Dave’s special and he opens up with this whole thing about Anthony Bourdain [killing] himself meanwhile his friend who works at Footlocker is doing fine. That joke has such a degree of difficulty. For him to stick that landing it’s like, ‘Wow. Bravo. 10 from the Russian judges.’ No hack would ever attempt such a thing.”

Chris and Dave have become fast friends over the years and Chris said that wasn’t by accident. “I like being around comedians,” he said. “I realized Cosby and Richard Pryor did not get along. Richard and Eddie didn’t get along, so I made it a fucking conscious effort—me and Dave Chappelle are going to get along,” he said.

On his last tour, Chris invited Chappelle to share his stage several times. “There was like a couple shows that were just me and Dave on stage for like two hours. He would call up my road manager, like, ‘I’m coming,’” he recalled. “I wished we had filmed those shows.”

“We just riffed … and we tag on each other’s lines. It was like Jay Z and Kanye [West] when they were on tour together,” he continued.

He never feared being upstaged, either. “I’m secure with my spot. I feel like a ‘made’ man,” Chris said. “I just love Dave, and I look at it like [Jean-Michel] Basquiat and [Andy] Warhol and we’re just collaborating.”

Another comedy legend he’s collaborated with is Murphy, who helped jumpstart Rock’s career by getting him a role as a foul-mouthed valet in “Beverly Hills Cop II.” Eddie returned to the spotlight in 2019, starring in “Dolemite Is My Name” and hosting “SNL.” Howard asked Chris if he suspected he’d soon return to stand-up, too.

“He keeps saying it,” Chris said. “I was supposed to be on tour right now and when I was trying to lock up buildings Eddie already had some of those buildings locked up.”

“It was like, I don’t want to take [Madison Square] Garden 20 days after Eddie Murphy,” he continued. “If we were boxers, I wouldn’t want any part of that fight. If you had Eddie Murphy on yesterday, I wouldn’t come on today. Let that simmer down.”

While Murphy may be out of practice, Chris believed it wouldn’t take him more than a month to get back into game shape. “I’ve been to his house and talked to him, he’s pretty funny. He’s the most talented guy to ever do it, honestly,” he said. “Pryor is the greatest … but Eddie is the most talented to ever pick up a mic,” he said.

Speaking of game shape, Chris recently flaunted his chiseled abs in a photo shoot. “Was that a big decision for you?” Howard asked.

“I wasn’t Kevin Hart-ing it, who I also love, or Joe Piscopo-ing it. It’s a little more innocent,” Chris laughed before comparing it to actresses who like to document their form by posing for Playboy. “I promise you, that’s the last time you’ll see my abs,” he added.

How did he get in such great shape? A combination of working out and learning how to swim. He told Howard he’s still taking swimming lessons but has grown pretty comfortable in the water. “I’m not, you know, jumping off a yacht quite yet, but I’m cool in a pool,” he said.

Howard was impressed by his guest’s new outlook on life, and he went on to predict the recently divorced comedian might one day remarry.

“Really? Nah, nah, nah,” Chris responded. “It’s not marriage, it’s just do we really have to involve the government in this? Can I just have somebody that’s beautiful and loves me and wants to take care of me? Can I just put them in my will and get them insurance?”

Though he’s not looking to walk down the aisle any time soon, Chris has been dating here and there. He even gave the celebrity dating app Raya a shot, though not for long. “Raya is like a human slot machine,” Rock told Howard, “And you’re just like, ‘Come on, Aces.’” 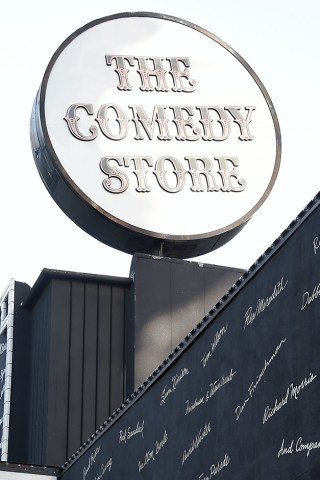 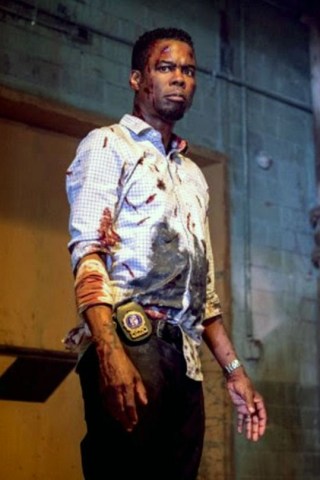 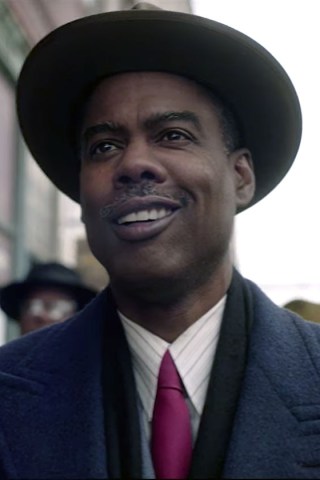 Billie Eilish Takes Top 4 Prizes & Makes History
You Give us your email Address we'll give you even more howard!