VIDEO: Gary Dell’Abate Gets Ribbed by King of All Blacks After His Wife Passes on ‘Bang O’Clock’

“I don’t think his wife is sexually attracted to him anymore,” the Wack Packer suggests

Howard recently suggested everyone reconnect with their sensual sides by engaging in some afternoon delight at a designated time he dubbed “bang o’clock.” While many couples across the globe no doubt got down at 4 p.m. Monday afternoon in the Stern Show’s honor, Gary Dell’Abate and his wife Mary were not amongst them. On Tuesday morning, Howard’s longtime executive producer revealed it wasn’t for a lack of trying.

“I thought it would be really cool,” he recounted. “She goes, ‘You’re usually in a meeting at four.’ I go, ‘I could move some stuff around,’ and she just laughed and walked away.”

Howard couldn’t understand the issue. “Why not?” he asked. “It would’ve been fun. What about, like, healing the world one load at a time?”

King of All Blacks called in to share a theory. “No disrespect to Gary, I love Gary, but I don’t think his wife is sexually attracted to him anymore,” the Wack Packer opined.

Gary disagreed with King, suggesting he was merely desperate for airtime. “Our life is plenty good,” the staffer insisted.

Gary’s colleague Jon Hein was reportedly hitting ‘em with the Hein a little more often in his own marriage, and Howard couldn’t help but wonder why. King had a theory for that one, too, which involved the size of Jon’s manhood.

But Gary and Jon cautioned the Wack Packer against jumping to those types of conclusions. “Clearly Gary and I are complete charity cases,” Jon said. “We know how lucky we are. We both know how better looking our wives are than we are, but somehow, someway we’ve managed to have a couple kids, stay together for a long time, and have a pretty good relationship.” 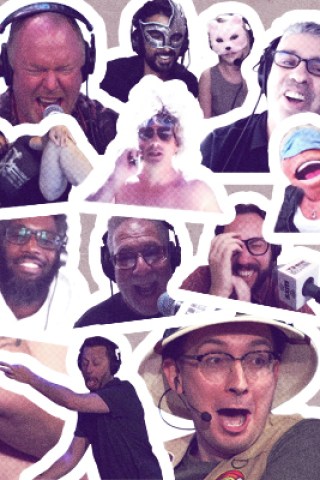 Stump the Stern Show Superfan 2020 Quiz
You Give us your email Address we'll give you even more howard!