Jennifer Aniston, Courteney Cox, and Lisa Kudrow All Sit Down for a Friendly Stern Show Interview 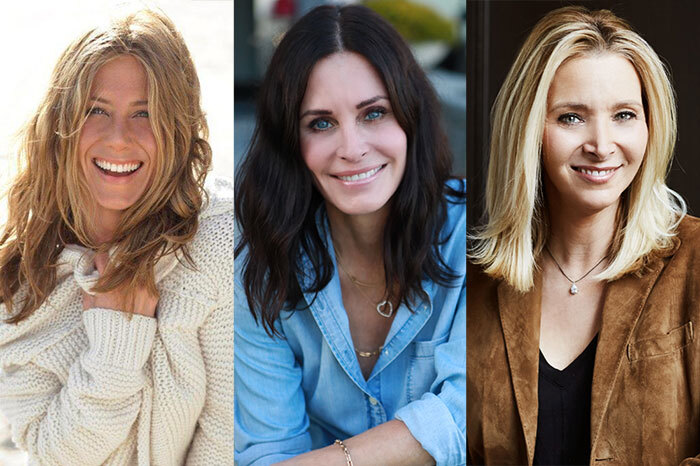 Three of television’s most enduring stars connected with the Stern Show from across the globe on Wednesday as Jennifer Aniston, Courteney Cox, and Lisa Kudrow sat with Howard for a group interview covering their upbringings, successful show business careers, and recent “Friends” reunion special. They also opened up about the unique bond they forged on set back in 1994 which has only grown stronger since.

Considering the show ran for 10 seasons, Howard was amazed his guests never grew tired of each other (or their male counterparts, David Schwimmer, Matt LeBlanc, and Matthew Perry).

“We’re so lucky,” Aniston agreed. “We felt that during the pilot.”

As lucky as the six-member cast of “Friends” felt while filming the pilot, Kudrow revealed on Wednesday why she was perhaps a bit more nervous than her co-stars. Directing that first episode was James Burrows, a much-respected name in television who had also directed the pilot episode for “Frasier” one year earlier. Lisa was initially cast on that show as Roz Doyle, Frasier Crane’s witty radio producer, but she was let go and replaced by actress Peri Gilpin.

“I did think, ‘Oh, I am not this guy’s cup of tea,’” she said of Burrows. “In auditioning for ‘Friends,’ I was the only one of the six of us who had to go in and audition for him,” Kudrow continued, adding Burrows gave her zero feedback after the tryout. “I left going, well, that either means, ‘She’s beyond help and hopeless, just like I always knew,’ or ‘It’s perfect and I have no notes.’”

Nervous or not, Lisa never doubted herself. “I was trained to cope,” she said. “And he wasn’t wrong about ‘Frasier.’ I wasn’t right [for the part].”

Lisa never got fired from “Friends,” of course, and her quirky character Phoebe Buffay became an integral part of the show. But Kudrow and the writers worked hard at making Phoebe fit in with the other characters. “She was her own thing,” Lisa recalled. “They had to figure out how to convey, ‘No, these other people like her.’”

They’ll Be There For Each Other

Courteney was the best-known cast member when “Friends” kicked off in 1994. As she told Howard on Wednesday, she was also the highest paid. All that changed in 1996, however, when the cast did something unprecedented. They banded together and demanded equal pay and a salary increase to $100,000 per episode.

“We’re all doing the exact same amount of work,” Aniston explained on Wednesday. “I wouldn’t have felt comfortable knowing I was making more.”

“We all felt that way. I thought it was the most important thing—as we all did—that we all were equal in every single way,” Cox said, adding, “That was the first time that people had all stuck together in a cast. I think it was scary, probably, for productions after that.”

Lisa marveled at how supportive all six cast members were of one another. “It just got rid of bitterness,” she said. “It was such a great relationship that is really rare and really lucky.”

“I think Courteney had a lot to do with it, too, because she was the most well-known,” Lisa continued. “When we got there she was like, ‘Let’s help each other if you think something’s funny, let’s give each other notes.’”

“It was healing,” Jennifer said. “We actually kind of parented and healed and loved each other.”

Over its 10-season run, every “Friends” star but Courteney scored at least one Emmy nomination. Howard wondered if that upset her.

“Sure,” she admitted. “When every single cast member was nominated but me, it definitely hurt my feelings.”

“The only thing that made me feel good—because they’ve all won and they’ve gotten so many accolades—I got nominated for “Cougar Town” the first year for a Golden Globe. I want to say, ‘Yeah, who cares?’ [but] it meant everything to me,” she continued.

“You were brilliant, Courteney,” Aniston chimed in.

As fate had it, before she knew they’d be the ones getting Emmy recognition, Courteney had once felt guilty about scoring a different nomination in front of Lisa and Jennifer. “The three of us were in my house in Santa Monica and I got nominated for a People’s Choice Award,” she told Howard. “I remember thinking, ‘Oh, I feel horrible.’ Cut to: There goes that. Shouldn’t have felt bad.”

“We were so excited,” Aniston recalled. “And I’ll never forget it came through your fax machine upstairs.”

The One Where Schwimmer and Aniston Resisted Real-Life Temptations

Few storylines captured “Friends” fans’ attention more than the on-again, off-again relationship of Rachel Greene (Aniston) and Ross Geller (Schwimmer). In their recent reunion special, Jennifer revealed there was real-life chemistry between the two actors, but she said they never hooked up. Considering they spent about a decade of their lives kissing onscreen, Howard was hardly surprised.

“I believe it was consummated,” he told Aniston. “Because why not?”

“How could you not believe me?” she responded, her jaw dropping to the floor.

“David was great [but] we were in relationships. It was always never the right time, and it wouldn’t have worked” Aniston continued. “The beauty of that was, whatever feelings we had, we just literally channeled everything into Ross and Rachel. I think maybe that’s why it resonated.”

“But, no, we never, on my life, [got together] and Courteney and Lisa would know if we did,” she added. “They can vouch for me.”

“I would proudly say I banged Schwimmer if that happened,” Aniston laughed, later adding, “He reminded me of my high school boyfriend, to be quite honest.”

That wasn’t the only time Jennifer mentioned her high school boyfriend. She, Courteney, and Lisa shared multiple stories from their childhoods, which seemed less idyllic than some fans might have guessed. Courteney, who grew up in the suburbs of Birmingham, Ala., told Howard she wasn’t very popular in school and the other kids often mocked her surname.

“I hated my last name, but then when my dad passed away I thought, ‘I’m going to own this and keep this going,’ because there [was no one else] in the family to keep it alive,” she said.

As she explained it, one perk of becoming famous was exorcising some of those childhood demons. “There were certain people in my childhood that were not nice and I was excited to be able to be like, ‘Alright, and what are you doing?’” Courteney said.

All three women skipped their senior prom. Kudrow and Cox never got asked while Aniston’s school never even had one. “It wasn’t a thing,” Jennifer said. “It was a high school for performing arts and for some reason we just had our own party.”

The trio also shared several “Saturday Night Live” anecdotes. Courteney hosted in 1995 but told Howard she wasn’t far enough along in her career to fully enjoy it. “I was green,” she said, explaining she was just coming off the first season of “Friends.” “I was not experienced enough to do that show [but] now I would love it.”

Lisa, meanwhile, auditioned for a spot on “SNL” but was passed over for Julia Sweeney, one of her colleagues in the improv and sketch-comedy troupe the Groundlings. “I don’t think they were seriously looking at me. I think it was, ‘As long as you’re looking at Julia, take a look at her, too,’” she recalled.

Jennifer, who had befriended “SNL” stars Adam Sandler and David Spade in Los Angeles, once scored an offer from executive producer Lorne Micheals to join the show as a cast member. She declined. “I was such an ignorant kid,” Aniston told Howard with a laugh. “I just had this idea the men don’t treat the women well on this show … The gall that I had.”

“Fair enough,” Lisa interjected. “You know the work situation you’re going into, and you’d rather not.”

“It was a boy’s club,” Jennifer agreed.

Courteney spoke about her love for music and musicians several times Wednesday morning, regaling listeners with a story about playing piano alongside Elton John and later opening up about her romance with singer, songwriter, and Snow Patrol band member Johnny McDaid.

“Maybe I am a frustrated musician,” she told Howard. “There’s something about musicians, the way they think. Just music in general is my favorite thing. I love it.”

McCaid lives in England, so he and Courteney were separated for most of the pandemic. She recently made it over to his side of the ocean, however, and after quarantining at his apartment for five straight days she said she was ready to finally get out on the town. “Oh, am I going to go out tonight,” Cox laughed.

Courteney also fielded questions from Howard about what working on “Ace Ventura: Pet Detective” was like and whether she fell for her co-star Jim Carrey.

“He was so funny. It was just [about] cracking up all the time,” she said of Carrey, explaining he played the character straight during rehearsals and then “turned it on” when the cameras started rolling. “He cracked me up the entire time,” she added.

“Was there a romantic relationship?” Howard asked.

“There was a crush for sure,” she said.

Fast Times With Pitt and Aniston

Howard enjoyed the recent “Fast Times at Ridgemont High” table read, in which Aniston, Sean Penn, Morgan Freeman, Matthew McConaughey, John Legend, Julia Roberts, Brad Pitt, and other A-list actors read through the script for the 1982 comedy while raising money for a good cause. At the same time, he wondered if it was awkward for Jennifer and Brad, her ex-husband of several years, to play love interests on the virtual stage.

“No, it was absolutely fun,” she said. “Brad and I are buddies. Like, we’re friends and we speak. There’s no oddness at all except for everyone that probably watched it and wanted there to be.”

“It was classy,” Howard agreed.

“That’s right. We had fun, and it was for a great cause,” Aniston said. 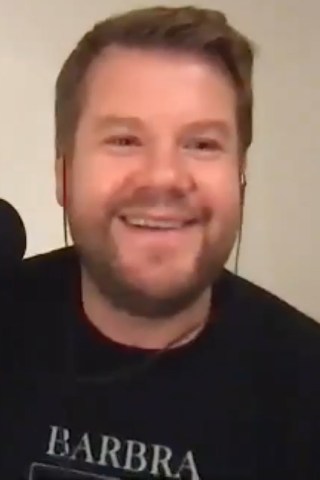 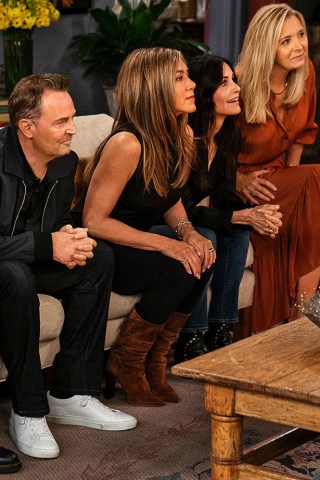 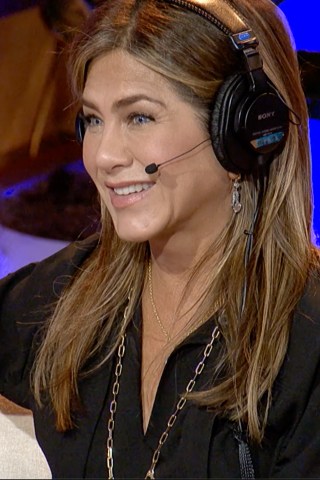 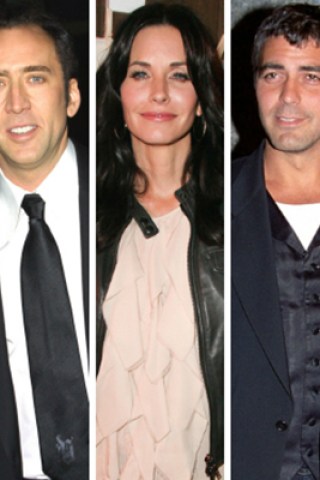 A Look Back at the Stern Show's Surprise Guests
You Give us your email Address we'll give you even more howard!