Two rock and roll powerhouses made an extraordinary joint appearance on the Stern Show Wednesday morning as the Smashing Pumpkins and Jane’s Addiction joined forces in the studio to perform two classic tracks and reveal exclusive, industry-shattering news about an upcoming tour. Sitting side by side in front of their bandmates, frontmen Billy Corgan and Perry Farrell also enjoyed an epic conversation with Howard that touched upon everything from backstage tour scrums and accidentally giving out David Bowie’s email address to how heartbroken they were after the world lost fellow rock great Taylor Hawkins.

First, Howard let his listeners in on some exclusive (and exciting) news. “The Smashing Pumpkins and Jane’s Addiction will be going out on the ‘Spirits on Fire Tour’ this October and November,” he announced. “These two great bands with these two great frontmen—it’s orgasmic, it will be beautiful.”

As Billy explained it, the two first crossed paths in the late 1980s when the Smashing Pumpkins opened for Jane’s Addiction. “We have a long, long crazy history with the bands intersecting,” Corgan said, revealing Farrell wasn’t quite sober when they first met but he still knew how to put on a heck of a show.

Howard’s excitement for the upcoming mega-tour was palpable, though he wondered if the logistics involved with such a massive undertaking stressed Billy and Perry out.

If anything, Farrell felt performing rejuvenated him. “As I’ve gotten older and wiser, my health has improved immensely just by being here and seeing all the crew and the musicians. Now I look at it like [it’s] my lifeline. … I feel like I’m eternal,” he said. “As long as there are people who need joy in their life and I see their faces when I’m singing, I’m like ‘Wow, I’m giving these guys joy. I’m turning them on.’”

Corgan, meanwhile, saw it as motivation to continue performing at the highest level. “We’re about to go on tour with one of the greatest bands ever on God’s green Earth. The Smashing Pumpkins are by nature a competitive lot and … [Jane’s Addiction will] kick our ass if we’re not careful,” he said, adding, “We will give our supreme effort each night.”

“This is going to be a really, really special tour. Once in a lifetime,” Farrell concluded.

Both singers endured tumultuous childhoods. Corgan had a drug-dealing father and was raised apart from his birth parents while Farrell was forced to overcome his mother’s suicide at a young age only to then live with an unkind father and stepmother who tried kicking him out as a teenager.

“It was a crazy time,” Billy said of their respective upbringings. “You come from your mother, so if you lose your root, your wellspring, your source, where do you go from there?”

“Do you both talk about that?” Howard asked, wondering if their mutual struggles had somehow drawn them to one another.

The two men admitted that wasn’t something they talked about together, but Farrell saw Howard’s point. “Much like [with Jane’s Addiction guitarist] Dave Navarro, I find that people that have really been nailed in life … they’ve got a whole lot of news to tell people. They become messengers,” Farrell said, adding, “I know about [Billy’s] past and his childhood. I don’t talk about it, but I do feel a kindred spirit.”

Corgan, meanwhile, focused on how fortunate they were to have overcome such massive hurdles. “My sense is when we’re together it’s more like a celebration,” he said, adding, “I look with real admiration at Perry that he pulled his life together and found a wonderful partner [and] has built a life to be admired. It’s such a journey.”

Howard wondered if a clash of egos was a consideration before embarking on the joint tour. “Are you worried on tour that you two might start fighting?” he asked the guys.

While Billy and Perry’s friendship was rock solid, the Jane’s Addiction frontman admitted he had already gotten into a physical altercation at Lollapalooza one year with the Pumpkins’ tour manager, Doug Goodman. “[It was] a real serious wrestling match,” Perry said. “He choked my ass out because I told him I was a champion wrestler, which I was.” 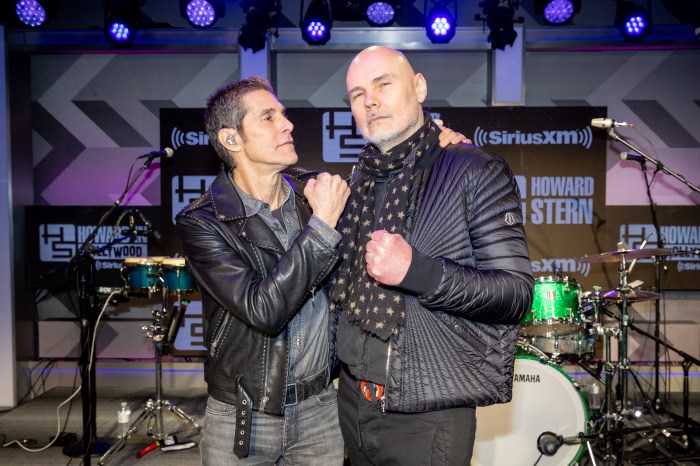 “I took him down and … he couldn’t take it, so when I went to get up he choked me—and he knows it,” Perry continued. “It’s on film.”

That’s when Doug Goodman entered the studio to share his side of the story. “I love you too much to tell you you’re full of shit,” he told Perry with a laugh.

As contemporaries of Taylor Hawkins, who passed away in March, both frontmen shared their thoughts on the beloved Foo Fighters drummer. Billy, who said he knew Taylor somewhat, described the loss as devastating. “There’s moments in time where you kind of have to stop,” he said. “Our lives are pretty fast and that’s one of those times where you kind of have to stop and think about it for a couple of days because it affects so many people so deeply.”

Perry’s connection with Taylor ran deeper. They shared bandmates—Jane’s Addiction’s Dave Navarro and bassist Chris Chaney were in a supergroup with Hawkins called NHC—as well as a close friendship. “You talk about a guy who brought people together to make music … He was that guy,” he said of his friend. “He brought musicians together, he loved music, he loved making music and writing songs … John Lennon was a songwriter … Billy Corgan’s a songwriter, and so was Taylor.”

The duo also went on surfing excursions together. “We would just go on surf trips and he [would go], ‘You know what makes us different, Per? We surf,’” Perry recalled. “He loved surfing so much. He wasn’t the greatest surfer, but he was very courageous, and the courage went into the music.”

We Can BCC Heroes

Billy and Perry considered themselves lucky to have enjoyed a personal relationship with rock icon David Bowie, who died in 2016. “He was always so great to me. I was blessed to have known him,” Corgan said.

Billy specifically recalled singing “All the Young Dudes” with him on stage at Bowie’s star-studded 50th birthday concert in 2010.  “It was terrifying,” he told Howard. “It was mind-blowing to hear him sing for real [while] standing next to him.”

“This guy was such a fucking genius,” Howard agreed.

“The thing about David that I think is so special to people on the alternative music side is that he could’ve been Frank Sinatra, he could’ve been like one of those guys, but he chose to just be a weirdo like us,” Billy continued.

For as much as Farrell loved and admired Bowie, meanwhile, he copped to inadvertently testing their friendship on two different occasions. The first was when Perry lost his Blackberry in a taxi. “The cab driver took it and went through it and saw David Bowie’s name, so he called him up,” he said, explaining the cabbie evidently kept calling Bowie until he was properly annoyed. “I had to finally [tell David], ‘Listen, man, it wasn’t me. I’m really sorry this guy is bothering you,’” he recalled.

David forgave the first technological misstep, but Perry soon found himself in more trouble when—in an attempt to raise money for the environment—he accidentally shared the “Rebel Rebel” singer’s email address with 300 strangers. “I didn’t know what a BCC copy was,” Perry insisted. “So, again, all these people started hitting him up. He said, ‘Perry what are you doing?’ I said, ‘I don’t know what I’m doing. Sorry.’”

Unfortunately, Bowie passed away before Farrell could finish smoothing things over. But he does believe they were headed toward a reconciliation. “They had this show that [David] put together with [longtime producer] Tony Visconti, and he wanted me to do it, so I was thinking, ‘Oh man, I’m going to make up with David. This is great. I can’t wait!’” Perry recalled.

“Two weeks before the show, he died,” he lamented.

When Perry started the Lollapalooza festival in 1991 as a farewell tour for Jane’s Addiction, he couldn’t have known how legendary – and financially lucrative it would become. Still, when he was offered a million dollars for the festival name at a time when he was struggling with substances and finances, the singer refused to sell. “I’m not going to sell it to you, you cheap motherfucker,” Perry recalled of his reaction to the offer. “I’m at my worst and I’m flat on my back and you’re going to come here and try to get a deal and a bargain? I’d rather fucking die.”

“That’s why he’s Perry fucking Farrell,” Billy proclaimed of his past and future tour mate. “To those people, none of that makes sense but that makes total sense to me. Like, ‘Fuck you motherfucker, get the fuck away from me.’”

“Do you guys think on tour that this could happen again where the bands come together and play?” Howard wondered.

“I think there’s so much love we should do something,” Billy said before the supergroup broke into performance.

“That was gorgeous!” co-host Robin Quivers remarked after hearing the lively rendition.

Billy famously played an ice cream man in the Smashing Pumpkins’ breakthrough video for “Today” off their major label debut “Siamese Dream.” Borrowing from real life, he told Howard he was inspired by an overly generous frozen-dessert peddler who one day refused to take his money. “He goes, ‘… I’m quitting this shitty job and giving away all my ice cream,’” the lead singer recalled. “He just stood there and gave away all of his ice cream … For some reason that stuck in my head.”

Years later when Billy pitched the idea to his record company, the suits were less than enthused. “The label said no fucking way,” he remembered. “We had to fight and fight and fight to do it, and of course it became super successful … the great thing was after that we could do whatever we wanted.”

Adorning his favorite acoustic guitar, Billy and the Pumpkins then went into a stripped-down rendition of the hit.

“Jeez, you guys sound great,” Howard remarked after the performance. “I could see the ice cream truck driving by as you were singing.”

The Smashing Pumpkins and Jane’s Addiction’s “Spirits on Fire Tour” begins Oct. 2 at the American Airlines Center in Dallas and concludes Nov. 19 at the Hollywood Bowl in Los Angeles. 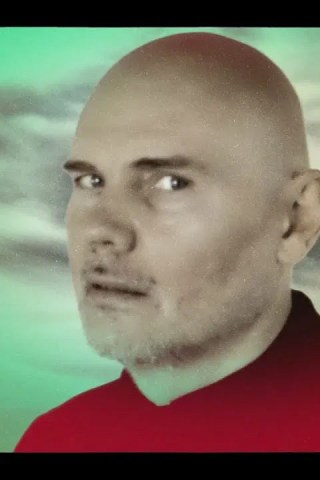 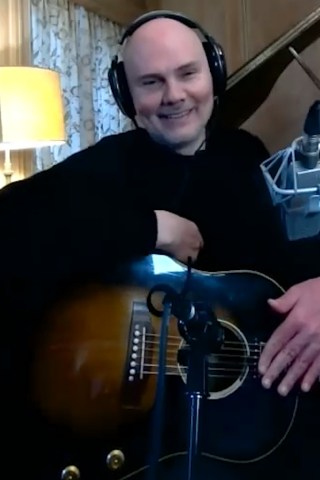 Wanna Go for a Ride

Billy Corgan Performs Live in Stern Show Return
You Give us your email Address we'll give you even more howard!