“I’ve never seen that much food in my life,” the Stern Show correspondent says 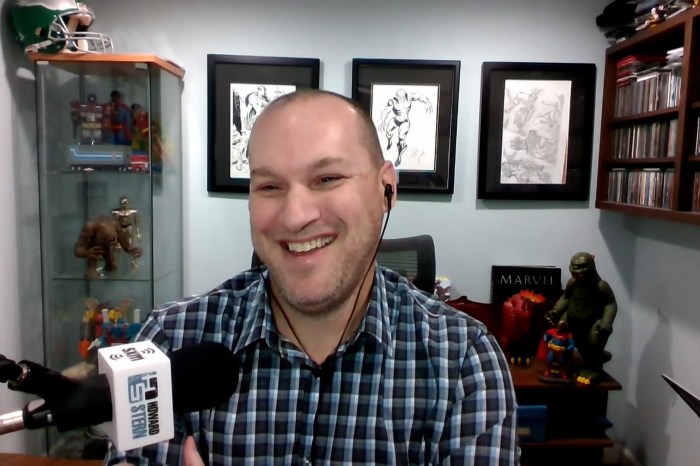 From Fist Fest to Ball Bash, Wolfie has braved several stomach-churning events over the years. But that hardly prepared the Stern Show correspondent for the disgusting things he would encounter while reporting from America’s largest buffet in Pennsylvania.

“I’ve never seen that much food in my life. It looks like a football field. It just goes on and on forever,” he told Howard on Tuesday.

Boasting Cajun catfish, barbecue ribs, New York strip steaks, perogies, and more, the 200-foot-long buffet offered everything one could hope for but restraint. The restaurant manager told Wolfie the kitchen served up 1,800 pounds of bacon each weekend day to customers who not only stuffed their bellies full of food at the table but also frequently snuck out leftovers to take home with them. “Somebody lined their purse with aluminum foil, and they had a whole bunch of chicken in there,” the manager told Wolfie. “A customer actually saw it and let us know.”

However, stealing food was just the beginning.

“What’s the most unhygienic thing you’ve ever seen one of the customers do?” Wolfie asked her.

“Throw up and go back to eat,” the manager responded. “They caught their food on the plate, they emptied their plate, and then they went back and started eating again.”

“Shouldn’t they put up a ‘No Vomiting’ sign?” co-host Robin Quivers joked after hearing the clip.

Wolfie spoke with several different buffet customers, including a blind man who complained about people farting and burping in the restaurant and a guy who boasted about eating eight plates worth of food in one visit. Going a step further, Wolfie embedded himself in the buffet’s bathroom for two hours so he could hear patrons in the stalls around him as they made room for more food. It was a cacophony of ghastly sounds.

“There was not a single person that shit and walked out of the building. They just went right back to their table and kept eating,” Wolfie told Howard.

Before heading for the exit, the Stern Show correspondent spoke with the janitor tasked with keeping the bathrooms fresh. After sharing a horror story about someone defecating on the floor, the employee offered future customers some words of wisdom.

“Give this guy a raise,” Howard remarked. “Or the Presidential Medal of Freedom.”