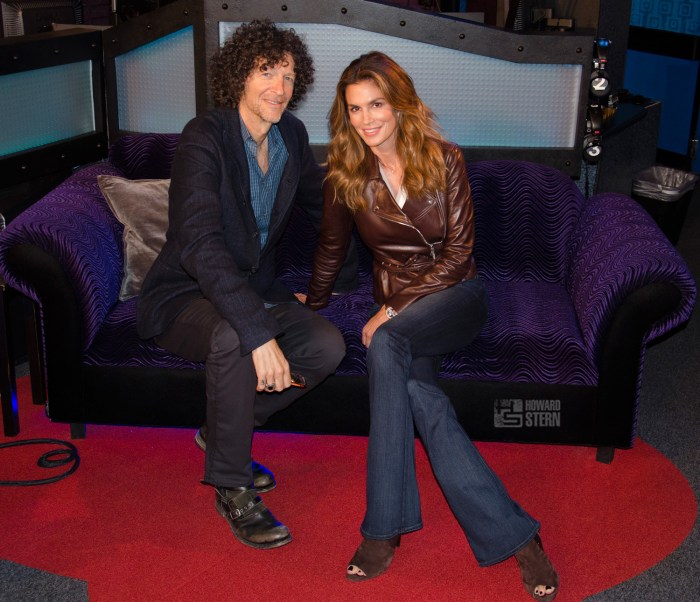 Cindy Crawford, one of the most super of models to ever live, came by to talk to Howard ahead of the release of her new book, “Becoming.” Check out some highlights from the interview below and tune in to Howard 100 on SiriusXM to hear the full show.

The Benefits Of Playing Dumb

Despite the stereotype, Cindy is no dummy. With a reported IQ in the range of 150 (though she maintained that she didn’t know), Crawford was valedictorian of her high school and got a scholarship to study chemical engineering at Northwestern — despite not really knowing what that entailed.

In business deals though, she explained, it is sometimes helpful to play the idiot. “I don’t have to walk in with all of the answers – nobody expects that out of me. So then I can bide my time and gather my information before I make a decision.”

Accepting Playboy Despite The Stigma

One decision that she felt some serious pushback on from friends and family was posing for Playboy at a time when doing so could risk lucrative cosmetics deals (the sign of success for a model at the time) if she did so.

Ultimately, she remembered, many of the photos from that shoot could have been in Vogue or any other magazine.

“And it is even weird that in Vogue you can be nude and it’s considered art. And then when you take those same pictures and put them in Playboy, it’s considered pornography,” Howard added.

Vogue: From Model To Supermodel

Speaking of Vogue, snagging a cover was still the end-all-be-all transition from model to supermodel for Cindy’s generation and her experience was no different.

After doing a “cover try” with the Vogue photographer, Cindy was chosen to be on her first cover in 1986 – but of course she didn’t know until she was in an airport and saw it on the newsstands.

“It’s really huge for cosmetics contracts,” she explained. And in spite of her Playboy shoot, Cindy got the deal with Revlon soon thereafter that really cemented her financially.

Her Husband’s Bromance With George Clooney

Cindy and her husband, Randy Gerber, have been good friends with George Clooney for years, so Howard took the opportunity to grill her about Clooney’s new wife, Amal.

“She’s pretty easy to like,” Crawford told Howard. “The thing that’s great about Amal is, you know, she’s so interesting – she’s like the smartest one at the table usually … but she’s as interested in what you’re doing.”

Later, Howard asked the million-dollar question: “Will George Clooney and Amal have children?”

Five years ago, she said, George was saying it would never happen, but he has “surprised” her lately. “Who knows? I would never say never.”