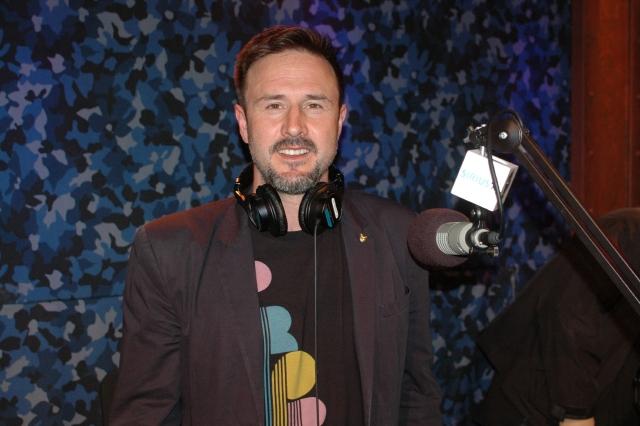 A somewhat surprised David Arquette immediately delved into the intricacies and subtleties of the F-Marry-Kill and decided that he would bang Tan Mom, marry Caitlyn Jenner, and kill Nicole Bass – but he said it could never happen because he loves Nicole Bass and would never be able to kill her.

Howard asked David about his sister Alexis who is transgender and how that affected the family. Arquette said that it’s even more difficult with Alexis who sometimes dresses as man and sometimes as a woman. “I want to be considered gender suspicious,” Alexis told David.

Howard said he heard a rumor that David will be walking Courtney Cox down the aisle at her wedding to Johnny McDaid, but David told him that the story is completely false.

David is currently starring in an adaptation of “Sherlock” which is in Toronto right now and he’s hoping it makes it to Broadway. He said that playing Holmes has been “impossibly hard” because of the two hours of dialogue, but he’s enjoying it nonetheless.

Before hanging up, Arquette also apologized to Howard for his raving phone call back in April. “I’m sorry the last time I called in I was a little crazy,” he offered, vowing that he loved Howard.

Robin, not letting Howard off the hook, made him finish his F-Marry-Kill himself after he hung up with David. He reluctantly chose to marry Nicole (“But god, is she a big dude”), sleep with Tan Mom, and off Caitlyn Jenner.