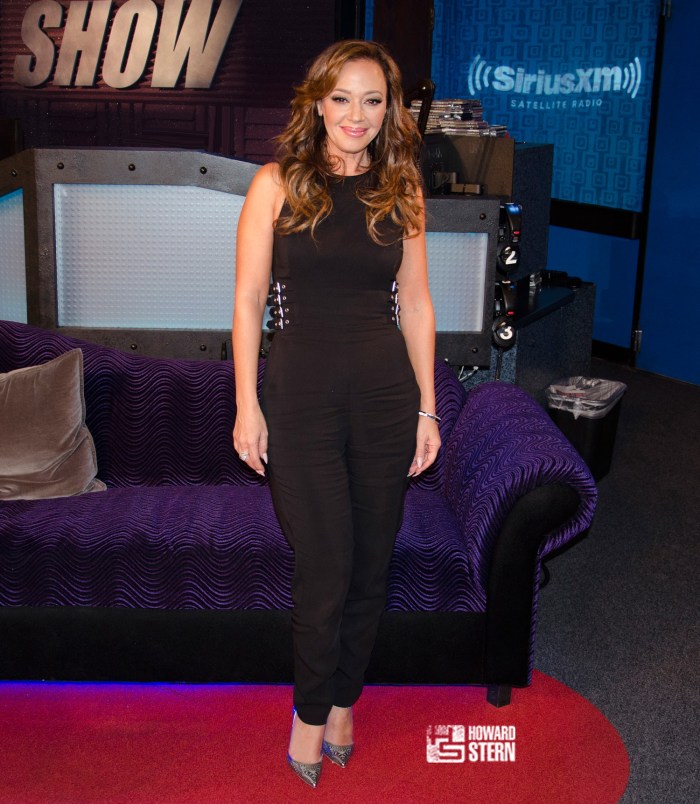 Leah Remini returned to the Stern Show on Tuesday to talk with Howard about her explosive new tell-all “Troublemaker: Surviving Hollywood and Scientology.”

The “King of Queens” star discussed a slew of intriguing topics with Howard and Robin, from her highly publicized split with the Church of Scientology two years ago to her tiff with her former colleagues at “The Talk.”

But first Howard wanted to know how she was holding up after the release of her new book and whether or not she was afraid for her life after releasing such a controversial memoir.

She admitted weird things had happened to a few of her friends (e.g. Facebook hacks, etc.), but that the Church has so far left her alone: “I think the times have changed. Many people are speaking out; it’s not just bitter apostates,” she explained. “People are starting to tell their stories.”

Originally baptized as a Catholic, Leah told Howard that there are several major differences between Scientology and “real” religions:

“[Scientology] costs a lot of money… and they’re required to be there two-and-a-half hours a day,” she said. “There’s a big difference between a real religion and this organization.”

Another difference is that current Scientologists are allegedly instructed to shun former members and dissidents. Leah admitted she had even done some shunning herself: “I know the policy that exists… I’ve done it myself. I was on this show defending [Scientology].”

And that’s part of why Leah felt so obligated to share her experiences. “What was I supposed to do?” she asked Howard. “Walk away and then pussy out?… I was defending it and was public about promoting the Church; now that I’m not there I have to be very vocal about not being there.”

Next the conversation turned toward Leah’s short-lived run as as a host on “The Talk.” Considering Leah has never been one to mince words, she wasn’t surprised that the gig didn’t work out. “If I wanted to be on this kind of show, I needed to shut my mouth and do what my bosses tell me to do,” she told Howard. “I can’t do that.”

She brought up a conversation Howard had on the show with her former co-hosts Julie Chen and Sharon Osbourne, admitting she had chemistry problems with them. Leah told Howard that Sharon once tracked her down at a party and said she was “the most negative person on the show.” As for Julie, Leah says she once told her it wasn’t so much what she was saying that was the problem, but “how she said it.”

Leah also spoke about “Cheers” star and famed Scientologist Kirstie Alley, who has said less than wonderful things about Leah since seeing her step away from the religion: “I know why she thinks she’s angry. But she doesn’t really know anything that I’m saying … and she will not read the book … because [Scientologists] see me as an enemy.”

Leah told Howard that she would probably avoid speaking to Kirstie or Tom Cruise – another celebrity Scientologist – if she ran into them on the street, but that she’d be doing them a favor: “[They] couldn’t talk to me,” she revealed. “I’m shunned… I wouldn’t talk to them and put them in that position [because they’re] supposed to disconnect from anyone who is antagonistic to what [they’re doing in their life].”

When Howard asked about comments John Travolta made years ago about being able to “heal with his hands,” Leah had only nice things to say. “John is such a sweetie pie,” she told Howard. “He loves the technology of Scientology. He loves it … He believes in it.”

Scientology wasn’t the only topic Leah and Howard discussed. He had heard she once auditioned for “Friends” and Leah confirmed the rumor, saying she had gone out for Courteney Cox’s role back when she was still turning her purse upside down just to find “Taco Bell money.”

“It wasn’t meant to be,” Leah admitted.

She went on to say she was in the middle of a rough patch when she landed her role on “King of Queens,” a show which she assumed would get canceled immediately for being “too normal.”

“It was great, but I didn’t think it was going to make it,” she told Howard.

But it did, of course. The show was a huge hit and Leah wound up starring opposite Kevin James for nine long seasons.

Grab a copy of Leah Remini’s new memoir, “Troublemaker: Surviving Hollywood and Scientology,” out 11/3, for more stories from throughout her career!