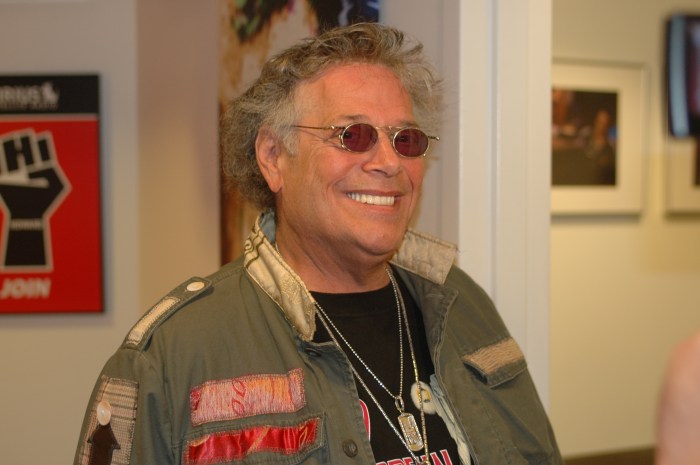 One of the “top five guitarists of all time,” in Howard’s opinion, Leslie West, called in this morning to promote his new solo album, “Soundcheck,” which features guest performers Brian May and Peter Frampton.

Leslie came to prominence as the co-founder of the band Mountain, but “Soundcheck” is also his 16th solo album. Howard became a fan early on. “Leslie was a god to me,” he remembered. “He’s a virtuoso,” Robin agreed.

Despite losing his leg in recent years, West said he wasn’t slowing down at all. “I’m pretty f-cking busy, believe it or not.”

To warm listeners up a little Howard played some classic Mountain tunes like “Theme For An Imaginary Western” — which was actually written by Jack Bruce for Cream, but Eric Clapton didn’t want it – and “The Animal Trainer And The Toad.”

Leslie also recounted some stories about working with the late Jack Bruce. “It hit me very hard with Jack,” he told Howard. The two had recorded and performed together many times and West also later took Bruce’s son out to perform with him.

Howard played a clip from Leslie’s collaboration with Peter Frampton from his new album, where they recorded a rendition of “You Are My Sunshine” that they changed into a minor key to give it a “funeral dirge” type of vibe. “Soundcheck” also features a track called “A Stern Warning,” which he insisted was loosely dedicated to Howard.

Something you may not know about Leslie is that aside from being one of the foremost musicians of our time, he is also one of the most sampled rock guitarists ever. Take Jay Z’s “99 Problems” for instance. “It was me and Billy Squire – our music,” Leslie pointed out – Kanye West, Common, and A$AP Rocky too among others.

And before the call ended, Leslie and Howard discussed “That Metal Show,” which features West as announcer. Leslie told listeners that when he got the gig, he called Howard to get some ideas of fun things to do with it. Howard said that Leslie does a great Porky Pig stuttering impression, so he should try that. As a result the credits for the show read: “Announcer: Leslie West” and “Announcer Advisor: Howard Stern.”