Iconic N.W.A. rapper and movie star opens up to Howard about everything from his early life to his latest flick, "Barbershop: The Next Cut" 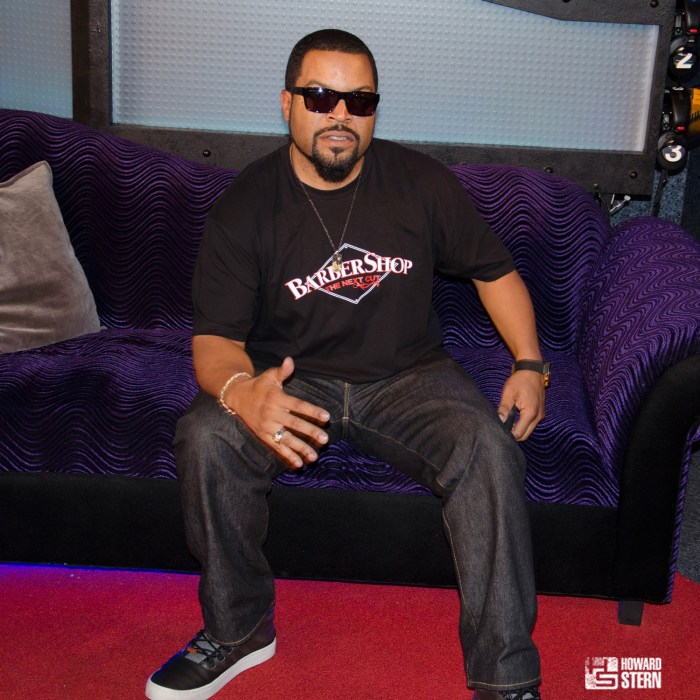 Perennial superstar Ice Cube stopped by the Stern Show on Tuesday morning to share some stories about his early life, almost losing his role in “Boyz n the Hood,” and N.W.A.’s recent induction into the Rock and Roll Hall of Fame.

Check out some of the highlights below.

Rock and Roll Hall of Fame 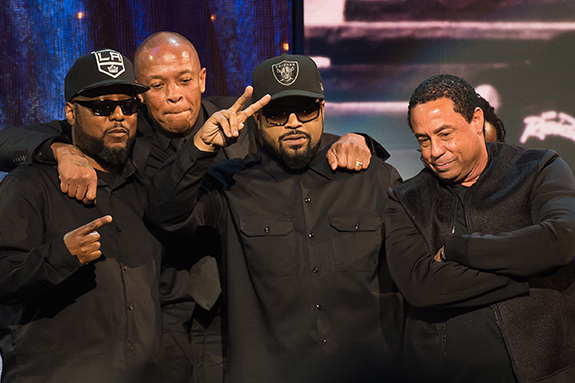 Howard was excited to welcome Ice Cube back into the Stern Show studio for the first time in almost 18 years. A lot has changed since Cube last visited in 1998. For starters, the rapper was just inducted into the Rock and Roll Hall of Fame alongside his N.W.A. bandmates Dr. Dre, MC Ren, DJ Yella, and the late Eazy-E.

Howard pointed out that N.W.A. wasn’t really on the Cleveland-based music shrine’s radar until the success of the band’s recent biopic “Straight Outta Compton,” co-produced by Ice Cube and starring his son, O’Shea Jackson Jr., who actually portrays his father.

Cube said he’s honored to be welcomed into the Hall of Fame, as he feels his group deserves the recognition as much as anyone else.

Howard acknowledged that N.W.A. opted out of performing at the induction ceremony because they didn’t feel supported. “They’re just, basically, throwing groups out there and you gotta kinda put your own production together,” Cube told Howard. “Once we realized that, you know, we damn near had to pay for everything, and it was like, ‘Yo, we getting inducted or we paying to play?'”

So, since the group didn’t want to shell out loads of cash to put on a concert worthy of an N.W.A. reunion, they politely declined putting on a show for the HoF crowd.

N.W.A isn’t the first rap group to enter the Rock & Roll Hall of Fame (Run DMC did it in 2009 and the Beastie Boys it in 2012, to name a few), but KISS frontman Gene Simmons recently said he didn’t believe the legendary group should have been inducted.

“I got a lot of respect for Gene Simmons,” Cube told Howard, “But I just think he’s wrong on this.” He continued: “Rock n Roll is not an instrument, it’s not even a style of music. It’s a spirit.”

Simmons continued to voice his concerns leading up to the induction ceremony and even reached out to Cube on Twitter saying, “Cube – I stand by my words. Respect NWA, but when Led Zep gets into Rap Hall of Fame, I will agree with your point.”

“It’s very weird,” Cube told Howard, later adding, “Ultimately, we in baby! Get used to it.”

When Ice Cube started N.W.A. he told Howard he never thought his group would make it any further than the streets of Compton, but eventually N.W.A took off and he found fame as a rap star.

He didn’t find fame as an actor, however, until John Singleton put him in “Boyz n the Hood.” As Cube explained it to Howard, the director — who was just a film student at the time — met with him three times before giving him the memorable role of Doughboy.

As Cube tells Howard, he was visiting “The Arsenio Hall Show” set because he wanted to convince Arsenio to let N.W.A. perform on the show, since the raunchy rap duo 2 Live Crew had recently been on the late night program. It was there that Cube fist met John Singleton, a junior at USC and an “Arsenio” intern.

Cube told Howard that John approached him backstage and told him he would be “perfect for his movie.” Cube was taken aback by this brazen kid and told Howard he thought, “You’re a junior at USC, you don’t even have a movie.”

So, he blew off the future director.

A year later, Cube ran into John again. Singleton — now a senior — remained adamant that Ice Cube would be perfect in his flick. A year after that, Ice Cube’s manager told him about a script he should consider, so the successful rapper and aspiring actor went in for an audition.

That’s where Cube met Singleton for the third time. Up until that point, Cube hadn’t taken the role seriously, so when he auditioned it didn’t go well. “I sucked, I didn’t read the script,” he told Howard.

Cube said Singleton offered him one more shot to go home, read the script, and come back to land the role. So, Cube did exactly that and set his trajectory in motion as a Hollywood movie star.

“John looked at me one day … and said, “When are you gonna write a script?” Cube told Howard. John told him there wasn’t going to be another “Boyz” movie coming from Hollywood, so he better start writing his own stuff if he wants to keep acting in good roles.

Cube said his first few ideas weren’t very good, but then he decided to write about what he knew: Compton. He told Howard that movies like “Boyz n the Hood” and “Menace II Society” portrayed his hometown as only wild and dangerous, but there was more to it than guns and violence.

That’s when he and his childhood friend DJ Pooh decided, “Let’s do a movie about all the fun we had off of this crazy shit going on in the neighborhood. And that’s kinda how ‘Friday’ started,” he told Howard.

“Straight Outta Compton” took critics by surprise in 2015, becoming the most successful music biopic of all time by pulling in over $200 million, a.k.a. five times more than its budget of $28 million. But the box office success didn’t give them too much help at the Oscars.

The movie was nominated for Best Original Screenplay, but was left out of every other category at the 88th Academy Awards, including Best Actor nods for Cube’s son and Jason Mitchell, as well as Supporting Actor for Paul Giamatti’s portrayal of the band’s manager Jerry Heller. Cube praised Paul’s acting in the film, telling Howard that “[Paul] held our move up … He made people take it serious.”

Cube told Howard how he reacted after the movie was overlooked by the Oscars in almost every category: “I was pissed for half a second…I was like, ‘Damn, how good do we have to be to get in there?” 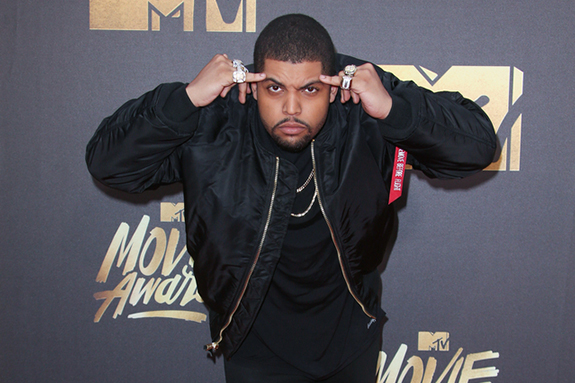 Howard wondered if it was weird that Ice Cube’s son O’Shea wanted to play his father in the film. But Cube made the point that it wasn’t any crazier than Howard playing himself in “Private Parts,” and Howard completely agreed.

Just What the Doctor Ordered

As the movie “Straight Outta Compton” portrays, Ice Cube left N.W.A. after he realized management was underpaying him and his bandmates. This split put a wedge between him and his childhood friend Dr. Dre. Still, Cube told Howard that Dre “was his mentor” and the reason Cube “was even in the game.”

“I actually wanted to work with Dre when I went solo,” Cube admitted, before telling Howard that Heller and Eazy-E didn’t allow that to happen.

“So, there was a period of estrangement?” Howard asked.

“Yeah, without a doubt,” Cube replied.

The two finally reconnected in1994 to release the rap single “Natural Born Killaz.” “It was a little awkward,” Cube said of their reunion.

He went over to Dre’s home to record and noticed “[Dre] got a room full of motherfuckers in the house and I’m just like, ‘Where’s Dre?'” Cube told Howard that there were people everywhere – in the backyard, living room, bedrooms. Meanwhile, Dre was in the back by himself working on beats.

When the two saw each other they hugged and “never even talked about the past,” Cube said, and “just went forward.”

About his relationship with Dre, Cube told Howard: “I don’t care if we don’t talk to each other for 10 years, if we see each other it’s going to be like yesterday.”

“Barbershop: The Next Cut” 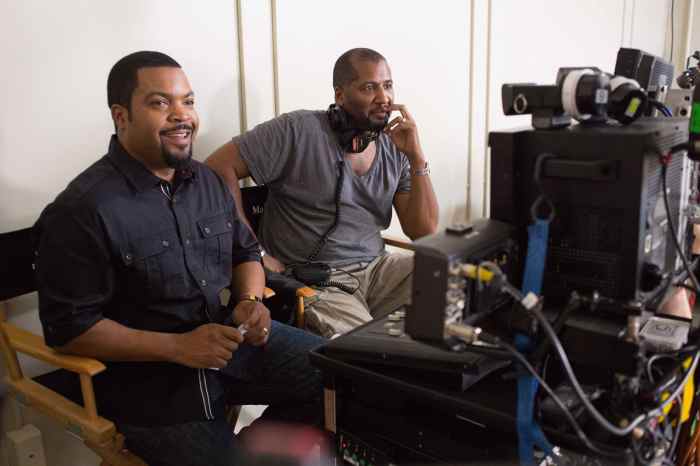 On Friday the third installment of the “Barbershop” franchise hits theaters.

“Our movie is great,” Cube told Howard. “If we make the money I think we should make, I’m happy.”

Since it’s opening up against Disney’s big budget adaptation of “The Jungle Book,” Howard wanted to know if “Barbershop: The Next Cut” had any special effects in it.

Cube laughed, admitting there are no monsters or superheroes in his flick. He added: “If you want to see something real, go see it. If you want to see Tarzan mixed with ‘Doctor Dolittle,’ go see the fucking ‘Jungle Book.'”

“Barbershop: The Next Cut” hits theaters everywhere on Friday. Check out the official trailer below.