Veteran journalist and TV personality sits down with Howard 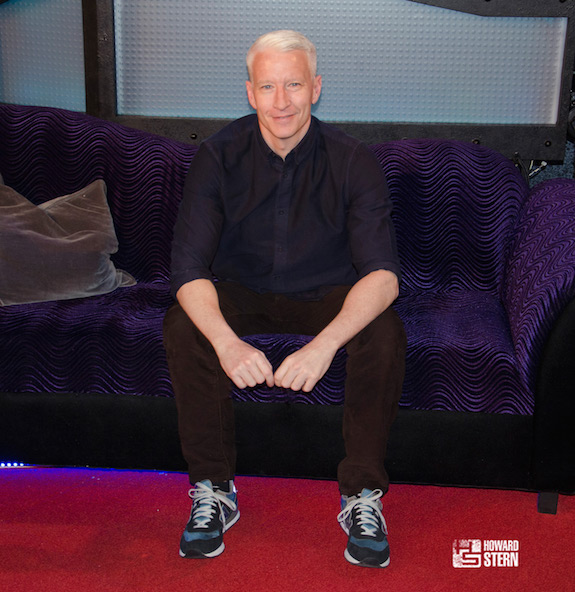 CNN newsman and author Anderson Cooper was in the studio today to promote his bestselling book, “The Rainbow Comes and Goes: A Mother and Son on Life, Love, and Loss,” co-written with his mother, Gloria Vanderbilt. Along the way, Howard and Anderson covered everything from Vanderbilt’s love life to why Cooper isn’t voting in the 2016 presidential race, and more!

Check out highlights from Monday’s chat with Anderson Cooper below.

Writing a Book With His Mom 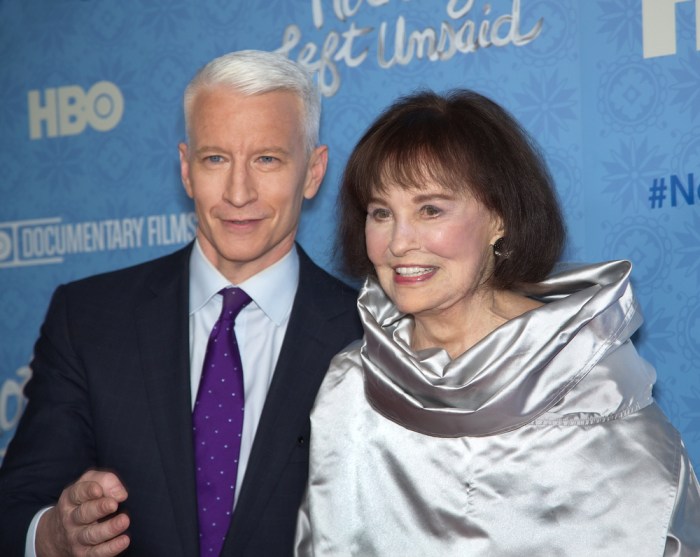 Anderson discussed the origins of he and his mother Gloria Vanderbilt’s literary collaboration, “The Rainbow Comes and Goes,” which began as a series of emails between the two. “I did this thing with my mom, so I’m happy for my mom,” Anderson said. “She’s 92, to have this happen to her at this age is cool.”

Anderson stressed that he and his mother try to keep no secrets between them. “I don’t think there should be anything left unsaid,” Anderson explained. “For me, my dad died when I was 10, and I used to have this fantasy that he had maybe written me a letter, and the letter would show up when I turned 18 or when I turned 21. It would tell me all the things I didn’t know about him. It would tell me everything he wanted for my life, and of course, there wasn’t any letter, and I realized I didn’t want the same thing with my mom. And so when she’s no longer here, I didn’t want there to be all this stuff, like, ‘who was this person?’ And so, we set out to change the conversation between us.”

That’s when the regular emails between mother and son began. “On her 91st birthday, we consciously started a new kind of conversation,” Anderson said. “No embarrassment.”

The candid nature of the collaboration meant that Gloria’s storied love life came into stark focus. However, this was nothing new for Anderson.

“I remember watching ‘Robin Hood’ with Errol Flynn when I was 10 years old with my mom, and I turned to her and said, ‘Did you ever know Errol Flynn?’ And she was like ‘oh yes,'” Anderson recalled.

Gloria’s fascinating tales of romance seem to never end, and even include an affair with the Chairman of the Board himself.

“Frank Sinatra came along, he was playing at the Copacabana in New York, and he contacted a friend and wanted to go out with her,” Anderson explained. “[My mom] left her husband because she was looking for a way to get out of the marriage … she met him when she was 21, when he was 63.” So who was this 63-year-old husband? Famed conductor Leopold Stokowski.

Howard wondered how much information is too much information between mother and son. “She does write about in the book that Howard Hughes was the first person who made her have an orgasm without faking it,” Anderson revealed. “I was like, ‘I don’t really need to know that.'”

Advice for the King of Pop 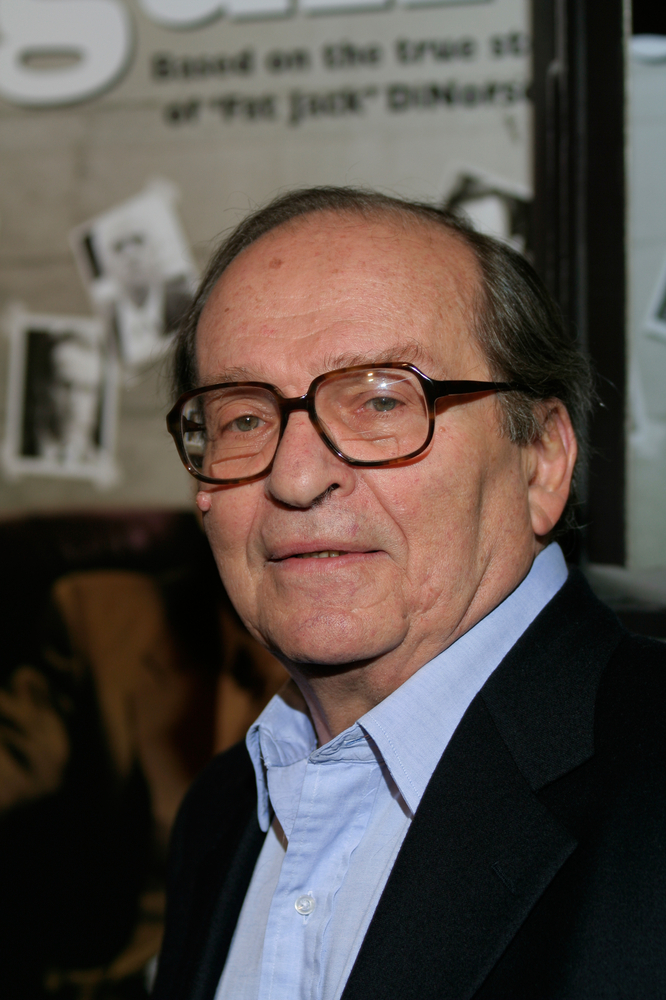 At one point, Vanderbilt was married to director Sidney Lumet. “Sidney was her third husband,” Anderson said. “Then she almost remarried Sidney after my dad died … I really wanted her to remarry him … Sidney was a great guy.”

The relationship led to a memorable night in young Anderson’s life. “I went to the premiere of ‘The Wiz,’ because at the time, when Sidney came back, when my mom was dating him, he was making the movie ‘The Wiz’ with Michael Jackson and Diana Ross,” Anderson said. “So, I remember going to the premiere, I was like 11, and rode in the car with Michael Jackson to the afterparty at Studio 54.”

Anderson continued, “I didn’t listen to music much at that age, so I didn’t really know who Michael Jackson was, other than seeing the guy in the movie. And we go to Studio 54 and I remember … I was watching Michael Jackson dance at Studio 54 and I turned to someone next to me and I said, ‘He’s really good at that. He should pursue it.'”

Suffice it to say, MJ was way ahead of Anderson.

Howard asked Anderson about his preparation for moderating the CNN Town Halls, in which Anderson has to engage with each presidential candidate one-on-one. Anderson stressed that he has to stay amazingly prepared.

“For me, with a politician, I like to read everything they’ve said in the last six weeks say, because that way, generally, if you know everything that they’ve said in the last six weeks, you kind of know what they’re going to say,” Anderson explained. “Not so much with Donald Trump, but usually … you know they’re going to kind of have certain talking points, and then you can try to get them off those talking points,” he told Howard.

The presidential debates, however, are much more complicated. “It’s like a knife fight, you know … it’s like three-dimensional chess,” Anderson explained, “because you have to think, okay well, if I ask this question to this candidate, then that’s going to make this candidate say this and want to respond. So you’re sort of trying to plan out this thing in three dimensions that gets very contentious.”

Howard also asked Anderson how he handles interviewing Senator Ted Cruz, who has come out against gay marriage.

“I separate myself from all of it,” Anderson explained. “I’m trying to figure out where this person is coming from. I’m trying to confront them with facts and I’m not going to get into an argument with them about my opinion versus their opinion.”

Howard brought up Donald Trump too, asking Cooper about his grasp (or lack thereof) on the issues.

“He certainly does not have the level of, you know, depth on issues that a candidate who’s been reading briefing papers,” Anderson said. “I don’t know that Trump is getting a lot of briefing papers and spending a lot of time, you know, delving into the nitty-gritty on the fight between Sunnis and Shia, and what the situation in Yemen is.”

His Dance With Madonna

In 2015, Anderson was pulled up onto the stage at a Barclays Center Madonna concert by the queen herself. “I didn’t know she was going to spank me,” Anderson admitted.

So how did it all come about? “[Madonna’s manager] Guy Oseary came up to me right before,” Anderson said. “Look, I’m a Madonna fan. Kelly Ripa and I go to a lot of the shows with Mark [Consuelos]. We’re like the oldest groupies in the world … so [Guy] came up and was like: ‘Would you go onstage and dance a little with Madonna?'”

Anderson wasn’t too concerned about the incident marring his image as a newsman. “I have to consider stuff, but at the same time, I’m not doing anything illegal,” Anderson told Howard. “Maybe it’ll be embarrassing, but that’s okay … I’m a dork.”

Nevertheless, it was a step outside of the comfort zone for Anderson. “I’d never danced in public,” he admitted. “I have a policy of never dancing in public. I think there might have been some dry-humping involved.

“I haven’t looked at the video,” Anderson admitted. “I refuse to look at the video … I was mortified.”

The Dangers of Reporting in the Field

Any experienced journalist can expect to face some risks out in the field, but Anderson’s resume in that department is a bit more robust than most. In particular, Howard brought up a scary incident Anderson faced in Cairo.

“I got punched around a bit,” Anderson said. “I didn’t really beat anybody up. I basically was just trying to get out of there with my team.”

“It was the revolution Mubarak, and we were trying to get to Tahrir Square, and we had to go through a mob of several blocks long,” Anderson described. “All of a sudden a guy came and punched me … and once then somebody does that, a mob just turns like a school of fish suddenly turning.”

Anderson told Howard that he believed the mob had a problem with journalists. “The government was telling people that journalists were kind of behind this,” Anderson said. “There’s no reasoning with a mob. There’s nothing you can do.”

How does one escape a situation such as that? “We had to walk four blocks back through the mob,” Anderson described. “You just try to move fast … You don’t run, because running is going to attract more attention. You don’t fight back, because that’s going to provoke more things.”

Howard asked Anderson about a similar incident while he was reporting in Haiti in 2010, during which he rescued an injured child.

“There was a thing that kind of became like a riot,” Anderson said. “There was a kid who got his head cracked open and I tried to move him to safety.” The incident was widely seen, and Anderson was applauded for his bravery.

“I’m a big believer in jumping head first into things that scare you most,” Anderson admitted.

Howard asked Anderson who would be getting his vote in the upcoming presidential election and the answer was a bit of a shock. “I don’t think I’m going to vote; I don’t think reporters should vote,” Anderson revealed, insisting that he’s not the only journalist who feels that way. “It’s a thing … There have been years where I have voted because sometimes I thought maybe I should … I’ve gone back and forth on it.”

Anderson continued, “I don’t want to be influenced one way or the other … I believe people should vote, but … my role is to ask questions.”

“I don’t like feeling like … I’ve taken a stand,” Anderson said. “I think it’s something you actively need to fight against … It’s not my role.”

Anderson and Gloria Vanderbilt’s documentary, “Nothing Left Unsaid” airs on HBO April 29th and their book, “The Rainbow Comes and Goes,” is available now.