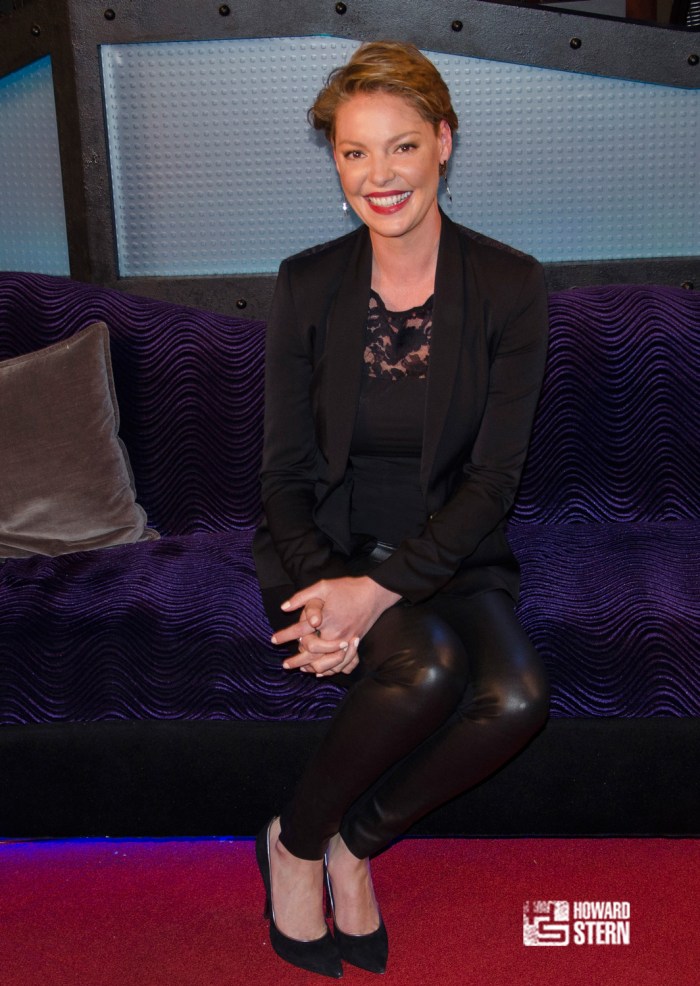 Emmy-winning actress, animal lover, and former child model Kathrine Heigl visited the Howard Stern Show for the first time on Wednesday to raise awareness for a new partnership with her charity, the Jason Debus Heigl Foundation.

She and the King of All Media found plenty of other subjects to talk about, too, from her first major acting gig — in which Gérard Depardieu was cast as both her father and fake lover — to her successes on “Grey’s Anatomy” and in “Knocked Up,” which each brought about separate offscreen controversies.

The Time She Didn’t Want Another Emmy 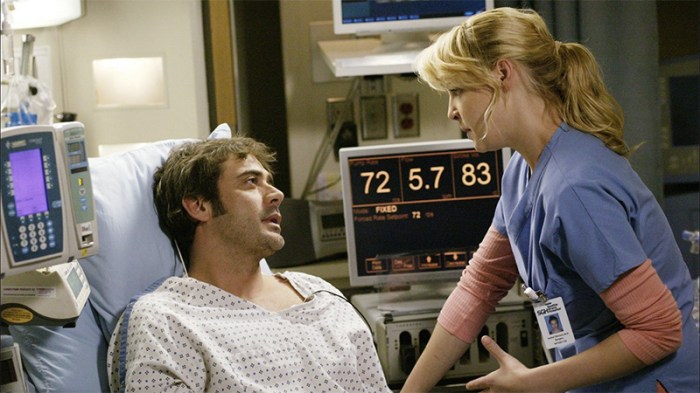 After only three seasons of playing Dr. Izzie Stevens on ABC’s “Grey’s Anatomy,” Katherine was nominated for and went on to win her first Emmy.

The actress admitted that the win was a big moment for her. “I still look at that Emmy every morning when I get up. I’m like, ‘Wow, that happened,'” she said.

One might imagine that winning back-to-back Emmys would feel even better, but Katherine never put herself in a position to be nominated again.

“What you have to do, as an actor, if you want to get nominated, is you have to submit your work,” she explained. But Katherine didn’t do that.

“I didn’t feel good about my performance,” she explained. “There was a part of me that thought, because I had won the year before, that I needed juicy dramatic material.”

“I just didn’t have that that season,” she continued.

Howard wondered how the show’s writers could ignore their Emmy-winning actress, but Katherine explained that “Grey’s” was a big ensemble drama with many moving parts and series regulars. She said she felt each cast member deserved their own “juicy, dramatic, emotional season.”

But as Katherine tried to explain to her reasoning to the press, the situation escalated and the hit show suddenly found itself shrouded in controversy.

“I was really embarrassed.” she said. “I went in to [showrunner] Shonda [Rhimes] and said, ‘I was so sorry, that wasn’t cool. I should not have said that.'”

Katherine continued: “I shouldn’t have said anything publicly, but at the time I didn’t think anybody would notice.”

Quitting “Grey’s Anatomy” was a “huge decision,” she told Howard. “It was a big deal.”

The ‘Knocked Up’ Controversy 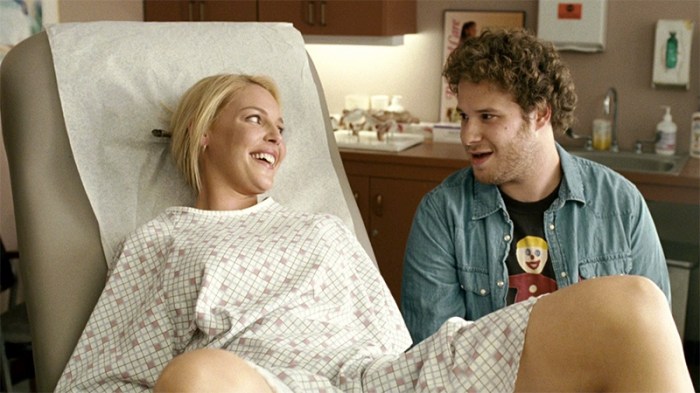 In 2007, Katherine starred opposite Seth Rogen in the Judd Apatow comedy “Knocked Up” and the movie was a huge success.

The world loved the unexpected hit about an unexpected pregnancy, but Ms. Heigl found herself not loving the way she played her own character.

“I liked the movie a lot. I just didn’t like me. The character,” she explained. “She was so judgmental and uptight and controlling and all of these things.”

“Judd allows everyone to be really free and improvise and whatever,” she continued, “And afterward, I was like, ‘Why is that where I went with this?'”

She told Howard that the character she had created was an “asshole,” which is why, when a journalist from Vanity Fair asked her to the comment on the role, she couldn’t hold back. “[The journalist] said, You know a lot of women felt it was a little sexist,'” Katherine explained, “And I felt obligated to answer.”

While she doesn’t blame the journalist for asking the question, she said her quotes eventually wound up getting pulled out of context, which resulted in an entire news cycle worth of stories making it seem like the actress was slamming her own film.

“Seth and Judd felt blindsided,” Howard told her, referring to conversations he has had with each since then.

It “was dumb,” she agreed: “They were incredibly good to me on this movie, so I did not mean to shit on them at all.”

Katherine said she still hasn’t called them or e-mailed them with a personal apology, though she did share with Howard a story about running into Seth years later and only then realizing how upset he was with her.

Howard advised her to just pick up the phone and say she was sorry, but she did something better. She sang an on-air apology song for Seth.

Listen to it here…

On ‘Scrutiny’ Leading Her to Therapy

From the “Grey’s” Emmy faux pas to her comments on “Knocked Up,” Katherine gained a reputation for making drama off camera as well as on it. She said she never wanted that label, though, and revealed that the unflattering attention eventually drove her to a few therapy sessions.

“I had never done therapy before, until a couple of years ago. I started going because of the scrutiny,” she told Howard. “I was not handling it well. I was feeling completely like the biggest piece of shit on the bottom of your shoe.”

“I was really struggling with it and how to not take it all personally and not to feel there was something deeply wrong with me,” she continued. “It was really, at first, very hard.”

Katherine said it led her to be extremely conscious of what she said to the press after that and hyper-aware of how she behaved on set. She recalled being afraid to say anything while filming an independent movie:

“I remember wearing shoes a size too small because I was afraid to tell wardrobe they weren’t big enough because I didn’t want to be difficult,” she said. “After that I was like, ‘This is nonsense, stop it.”

Howard empathized with her, saying it must be awful to be a disciplined actress who has been branded “the difficult person.”

“For me, it’s a lot, too, of just wanting to be able to sleep at night,” Katherine continued.

“I don’t want to compromise who I am and what I have to say so much that I go to bed going, ‘I’ve just become a robot; now I just do what they tell me to and say what they want me to say.'” she said. “That isn’t me.” 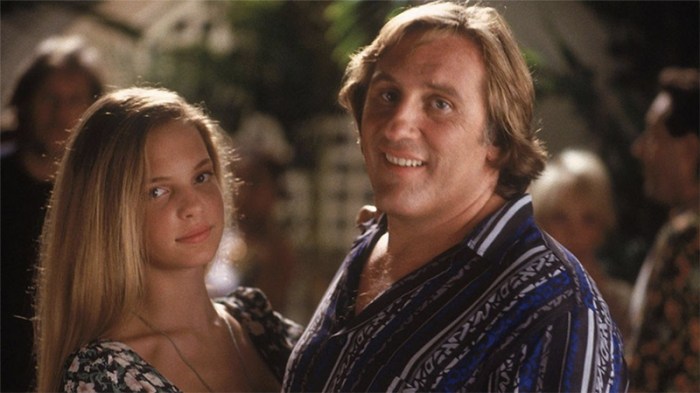 For those who don’t remember, the plot involved a teenage girl pretending to date her dad in the hopes of winning over another man.

“I had to do this scene where I was wearing a thong bathing suit and I was 14,” Katherine said, explaining that it made her uncomfortable — yet the director felt it necessary to the plot. “I was raised Mormon and I was a very good girl, so that was really hard for me,” she added.

What made the film shoot even wackier was that, since they spent a while shooting it in the Bahamas, Gerard decided to invite his family to visit him on set. Both of them.

“He had his wife and children there at one point. And they left,” she said. “Then his mistress and other children came.”

The plot of that movie “would never fly today,” she said, later adding that she recently re-watched the film recently with her 14-year-old niece and realized it was “really inappropriate.”

Breaking Up (With Cigarettes) Is Hard to Do

“Yes,” she said, admitting with a sigh that she waited until 25 to start smoking.

I bought my first pack and it was over,” she said. “You’re young, you’re self conscious, you’re insecure, you’re unsure of things.

When I got the part for ‘Knocked Up,’ I had just quit smoking,” she said, adding that she was “excited about it.”

But then Judd asked her to start smoking again for the role, thinking it would be a fun contrast to her pregnancy. So she started back up again. “As soon as I had permission, boom, I was back on,” she said.

Katherine said she quit smoking for awhile again last summer, but it made her moody. So then she tried taking Wellbutrin, which made things worse.

“Within two weeks I had a really bad reaction to it,” she said. “I just got really obsessive-compulsive thinking and then you get, like, suicidal, almost, like depressed.”

She said she has started vaping, though, and plans on trying hypnosis next.

The Truth About Cats and Dogs

Though Katherine has an exciting new legal pilot in the works with CBS, her main reason for visiting the show Wednesday morning was to promote her cat litter. No, seriously.

Katherine, like Howard, is passionate about caring for abandoned animals. In fact, she owns seven dogs and eight cats.

In addition to taking in animals herself, the actress has partnered with Cat’s Pride Litter to donate a portion of all of the company’s litter sales to the Jason Debus Heigl Foundation, an animal charity named after Katherine’s brother, who died tragically at a young age.

Donate to the charity here.