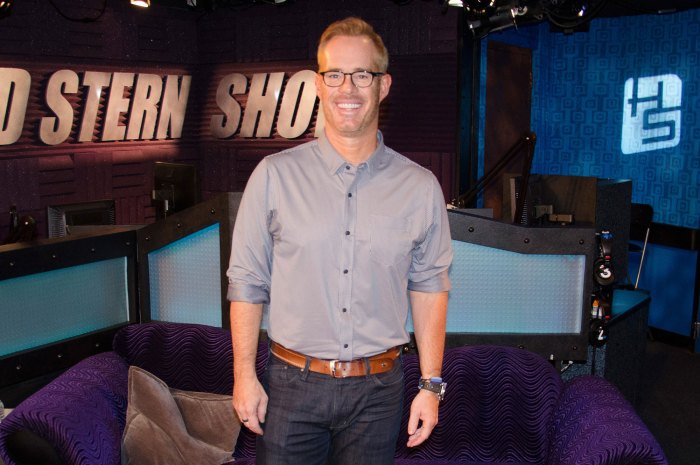 Joe Buck dropped by the Stern Show on Monday morning ahead of calling Sunday’s Super Bowl matchup between the New England Patriots and the Atlanta Falcons. Oddsmakers are already predicting what Joe will be saying on air, but he told Howard there are a few prop bets about him that definitely won’t pay off.

“We can go through the list, I’ll just tell you what I’m going to do,” Joe told Howard. “Some of the things in there — Aaron Hernandez, Michael Vick, guys that have played for these teams — I’m not going into Aaron Hernandez.”

Joe also doesn’t plan on calling Falcons quarterback Matt Ryan by his nickname “Matty Ice” since he thinks that sounds “cheesy.” Safer bets would be him bringing up Tom Brady being drafted in the sixth round and Buck sporting a beard on the broadcast.

“I could literally take down Vegas myself,” Joe told Howard, explaining that there’s nothing stopping him from laying down some money on himself. “Nobody asked me. I don’t sign some waiver.”

As for who’ll win Super Bowl 51, Joe admitted he’s picking Atlanta to come out on top. “I like to go against the grain. I’ll take the underdog, Atlanta Falcons,” he said. However, he’s aware that the Patriots and Brady are the favorites for a reason.

“The guy’s 39 and maybe better than ever,” Joe said of New England’s star QB. “And he’s got the greatest coach, [Bill Belichick].”

“It’s not an easy job to do,” Joe said. “When they’re counting you down for 120 million people to watch, the network has to know that you’re not going to fuck it up. They have to trust you. That’s what they’re buying with me.”

Joe proved just how professional he is, telling Howard about a 1994 Packers game during which he called a Brett Favre touchdown while peeing in a trash can.

“The bathroom was nowhere near the booth,” Joe recalled. With the first half dragging, he said he had no other choice but to relieve himself right then and there. He tried to hurry up and pee during a 30-second spot break but got stage fright and was unable to urinate.

“Finally, it starts and now we’re back,” Joe continued, “and on the first play after the timeout, Sterling Sharpe, it was the last game he played in the NFL, scores a touchdown and I am literally peeing into the trash can while I call the touchdown.

Buck revealed in his book “Lucky Bastard” that he received hair plug treatments at the beginning of his career after a colleague suggested the procedure to him, as well as advised him to drop 25 pounds. He said losing the weight was easy compared to the hair plugs. After his eighth and final surgery, he woke up to find the respiratory tube used to keep him breathing had damaged one of his vocal chords, rendering him almost speechless.

“I went into depression,” Joe said. “I’ve got a baseball season that’s about to start and I can’t say a complete sentence.”

He then ran into recent Stern Show guest Matthew McConaughey at an event in Mexico and admitted to having the hair plug procedure. “And [McConaughey] goes, ‘Mm, so what you’re saying is, you fixed your video but fucked up your audio,” Joe recounted.

He was honest with McConaughey but lied to his Fox bosses about his ailment, blaming his voice loss on a virus. It took seven months for Joe to recover, but he told Howard his voice will still crack on air from time to time. And when it does, he says his harshest critics lay into him on the internet.

“I hope you get cancer; I hope you’re dying,” Joe said of some of the comments he has read online. Several fan bases give Joe grief for what they interpret as him being biased against their team. He recently got accused of being too excited during the Chicago Cubs’ historic World Series win in 2016, their first in 108 years.

“Half the audience hates my guts,” Joe told Howard. “You have to be equally excited for both sides but then that stuff gets in your head.”

Joe said he’s been chased out of a bar in Boston by Red Sox fans and was even blamed in New York for injuring A-Rod. But he also shared a fond memory he has of the Yankees, who played in the first World Series game Joe ever called. He told Howard how happy it made his father, Jack Buck, the longtime announcer of the St. Louis Cardinals.

“He was so proud,” Joe said of his dad. After the game, Joe called his father to ask him what he thought of his son’s big broadcast. His dad pretended to not know what he was talking about before handing the phone off to Joe’s mom.

“I say, ‘What was the deal with dad?’ She said, ‘He was crying so much from pride that he couldn’t talk,'” Joe recalled. “I always knew he was very proud and I did some stuff that he never got to accomplish.”

Joe also opened up about the day his father died. Hear his touching story (below).