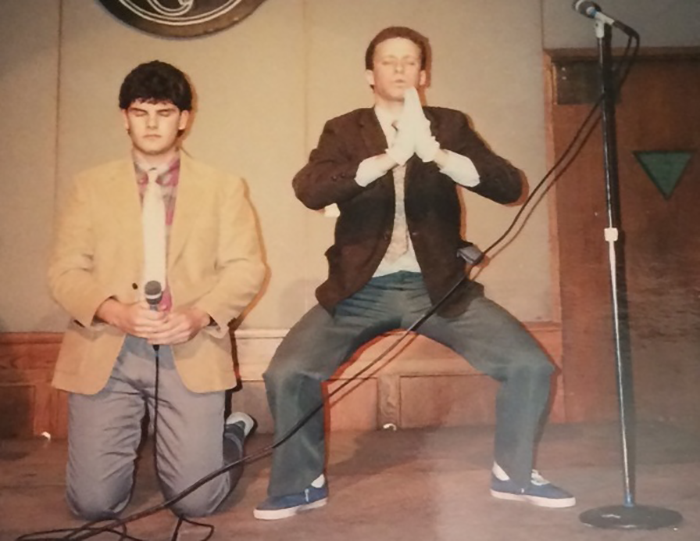 Renowned for his icy demeanor and steely-eyed glare around the Stern Show office (especially in the presence of Jason Kaplan’s infamous “Hit ‘em with the Hein catchphrase), you might be surprised to learn that Jon Hein spent time touring with a comedy troupe alongside actor and comedian Jon Glaser in college.

Friday’s Wrap Up Show found the University of Michigan alumnus—who has piqued listeners’ interest over the years with tales of some wild collegiate stats—reminiscing with Glaser about their time on the road together.

“That’s one thing Jon and I did in college … I took a year off from school and we traveled in this van,” Glaser recalled. “We put our own tour together and it was a cool way to see the country.”

Wrap Up Show co-host and Stern Show Executive Producer Gary Dell’Abate was fascinated and wondered what a young Jon Hein was like back in those days.

“I think pretty similar. What you see is what you get,” Glaser assured him. “Maybe his tush is a little bigger, but other than that just a nice guy, funny,” he added.

Rahsaan Rogers, for one, was shocked. “This is amazing to me—the fact that Jon Hein did comedy. I would’ve never expected that,” he said.

Still, the two admitted that they weren’t always met with sizeable audiences at the venues in places like Walla Walla, Washington and South Dakota’s School of Mines and Technology. Jon Hein even remembered one night that they performed to a crowd of just two people.

It didn’t matter, though, because as a troupe they were having a great time. “But Jon [Glaser] … we all knew Jon was going to go amazing places,” the Stern Show staffer said, adding that he was by far the most talented member of the group.

“It wasn’t even close,” Glaser teased with a laugh.

Despite taking a detour from the comedy world after that year-long tour for a career in advertising and marketing, Jon Hein maintained that his stint with the troupe remains a high point for him. “It was one of the best times I ever had in my life,” he said. Check out a photo of Jon Hein and Jon Glaser performing as “The Two Jons” in the late 1980s (above).