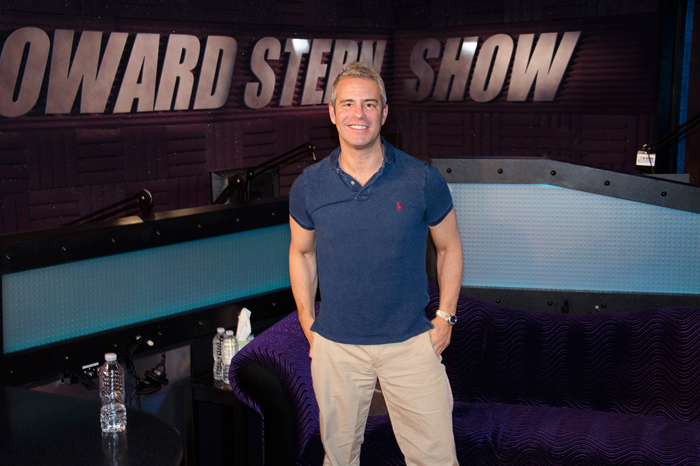 There’s not much Andy Cohen won’t talk about whenever he stops by the Stern Show. So on Monday, Howard pressed the new host of “Love Connection” on whether or not he ever had a love connection of his own with his good pal, musician John Mayer. As close as the two are, Andy said there’s nothing romantic between him and John.

“I have love for him, but I’m not in love with him,” Andy explained to Howard.

However, Andy did reveal he would be able to date John, if only he was gay. “John Mayer’s great looking,” Andy said. “I don’t like to make a move on a straight guy.”

Kelly Ripa is another close friend of Andy’s and while he wasn’t willing to tell Howard any behind-the-scenes stories of what goes on at her morning talk show, he was willing to select who he’d rather go to bed with between Kelly’s former co-host Michael Strahan and her new co-host Ryan Seacrest.

“I think I might do it with Strahan,” Andy answered. “His body is unbelievable.”

The impromptu either-or game continued with Howard asking Andy to choose between Strahan and his pal John Mayer.

“John Mayer, with the pouty lips,” Andy said with a laugh. “I love this game.”

Mayer also beat out A-list actor Hugh Jackman as well as another friend of Andy’s, Matthew Broderick, though Andy did compliment Matthew’s skin.

“The skin of Matthew Broderick is just about as soft a skin as you’ve seen anywhere,” Andy told Howard.

The only famous man that Andy might choose over Mayer seems to be Brad Pitt. “I love a blonde,” he told Howard.

Since Andy is such a huge Stern Show celebrity superfan, Howard also gave him a staff-centric matchup between Gary Dell’Abate and Jon Hein.

“Wow. That’s interesting,” Andy said while pondering which staffer he’d rather hook-up with. “I think I might go for Gary.”

As the host of the new “Love Connection” game show on Fox, Andy knows a thing or two about finding Mr. Right. He filled Howard in on the reboot and how his show differs from the original, including having contestants rate each other’s looks before their date even begins.

“We have all shapes and sizes,” Andy said of who is looking for love on his show. The new “Love Connection” will also welcome gay contestants on the show, including “some very hot lesbians,” according to Andy.

It was while hosting his new show that Andy had a health scare involving a polyp in his throat.

“I was having vocal issues,” Andy told Howard. Part of his recovery was going on the corticosteroid Prednisone, but Andy also attributes kicking his vaping habit to helping him get better.

“I thought that those were supposed to be good for your throat,” Andy said of his vape pen. He made it clear that, while he no longer vapes, he still partakes in marijuana—he just enjoys it by different means, like edibles.