Plus, JD Harmeyer displays a slick move while out supporting Sal the Turtle at Belmont 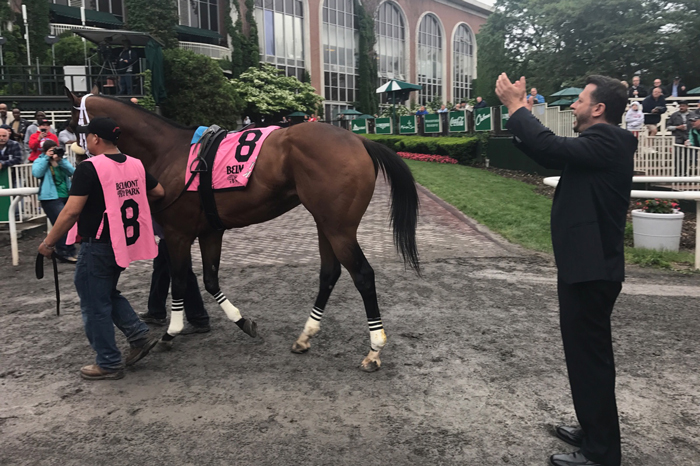 Sal Governale was back at Belmont Park in Elmont, N.Y., recently to cheer on the three-year-old stallion that has been riding under his “Sal the Turtle” namesake—and this time he was even interviewed on Fox Sports 2 for his take on the recipe for the colt’s success.

“Oh, I don’t know what I was saying,” the Stern Show staffer admitted on Tuesday to Howard.

Feeling newly empowered by the fact that he had been given a small piece of honorary ownership in his equine friend, Sal took his place in front of the camera to offer some commentary when it came time for the horse’s big moment on TV.

“He’s phenomenal,” Sal told a reporter. “The key is every time Sal [the Turtle] passes us, we give him lots of love. That’s the key. It doesn’t matter what’s going on … When that horse passes you, you have to let him know that you love him,” he continued.

Howard was baffled by the comments, but Jason Kaplan, who was in attendance to witness it all, attested that Sal lived by those words while the horse raced.

There were a number of Stern Show staffers present to offer their love for Sal the Turtle that day, including JD Harmeyer, who had a slick new move on display. According to Jason, JD’s fiancée had gotten interested in the betting aspect of the races. She would assess the stats before turning to JD, who would pull out the cash from his jacket and ask what she needed.

Unfortunately, Sal the Turtle was not able to pull out a win at Belmont, despite all of the love he received that day. Nonetheless, Sal told a reporter that having a horse named after him was a “dream come true.”​