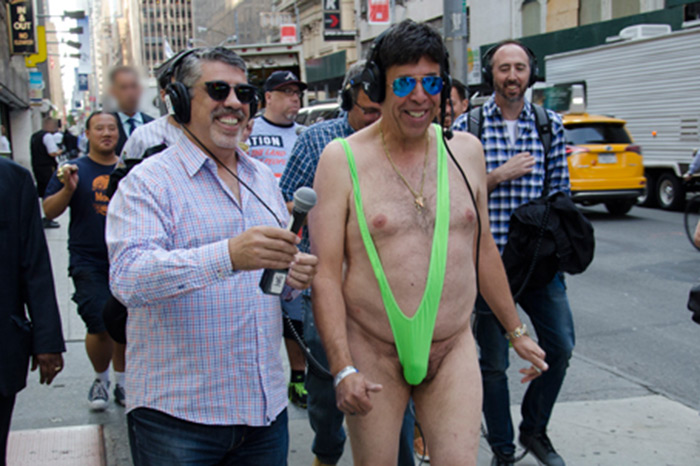 Don’t let his Walk of Shame photos fool you – frequent Stern Show caller Bobo says he’s packing at least seven inches, despite the less-than-enormous bulge that could be seen while he was wearing his now famous green mankini out on the streets of New York. On Monday morning, Howard said many fans had written in to say they were confused by the pics of Bobo’s package.

If he appeared to be a bit less than that during his walk, Bobo blames the crowd around him, all of whom were taking photos of him wearing next to nothing. But make no mistake about it — he’s a grower, not a shower.

“I can get seven, eight inches hard. That’s what counts,” he told Howard.

Since Stern Show staffer Jason Kaplan was with Bobo as he changed into his outfit, he got to see exactly what he’s working with down there. But it’s not just the size that surprised Jason — he told Howard he noticed an unusual hook in Bobo’s penis.

“I don’t know if this is an actual medical condition, [but] it was really bent and it was flaccid when it was bent,” Jason explained.

Howard questioned if Bobo ever sustained a penis injury and Bobo said indeed he had, though he didn’t think he actually broke it. The incident occurred in the “heat of passion,” he said, and left him in a great deal of pain. But whether or not that caused his penis to become crooked is still unclear.

All of the talk of Bobo’s manhood led to a brand new Stern Show character calling in: Bobo’s Penis.

“Nice to see you again,” it said to Jason Kaplan before cracking a few jokes about Bobo’s shape and size. “It’s like a tiny little hockey stick. Like, you’d give it to a mouse,” Bobo’s penis described.

Hear audio of Bobo’s penis injury story and the phone call from Bobo’s Penis (below).