Actress also tells Howard about being fired from “Chicago,” fighting for wage equality, and training for her new action flick “Atomic Blonde” 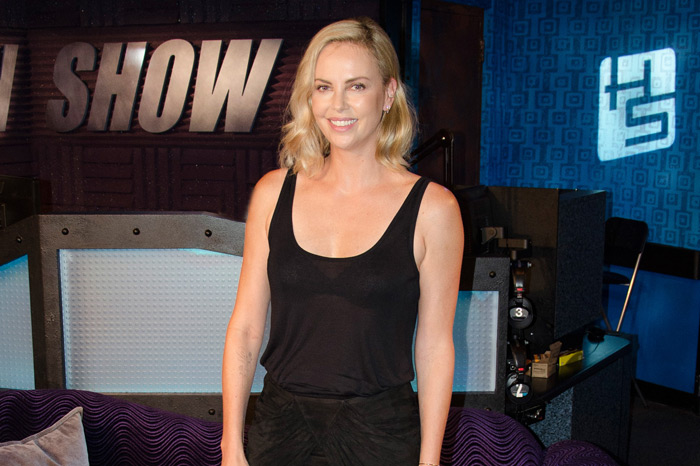 There was an Academy Award winner in the house on Wednesday’s Stern Show, but actress Charlize Theron admitted to Howard she initially declined her role in “Monster” that eventually earned her the Oscar.

“I turned it down,” she told Howard. “I’m only in that film because Patty Jenkins, the writer and director, wouldn’t take no for an answer … she was relentless.”

It wasn’t that Charlize didn’t like the script for the film, she just wasn’t confident that she would be able to pull off playing the part of real-life serial killer Aileen Wuornos.

“I felt like the script was so good that if you were going to do it, you had to do it visually, in a way that felt authentic to who she was, and I didn’t know if I could do that,” Charlize said. To transform her body to better match Aileen’s, Charlize told Howard she had to gain several pounds, which meant she could eat just about anything she wanted.

But not everybody involved on the film liked Charlize’s new look. “Our financier had no fucking idea what movie we were making,” Theron told Howard. “He thought he was making a hot Charlize Theron, Christina Ricci, lesbian love, sex movie.”

As a producer and star of the movie, Charlize said she got a call from the financier late one night after he screened some of the dailies from the film. “He fucking ripped me a new one,” Charlize said, explaining he had told her she looked terrible and wasn’t smiling enough on camera. “He just freaked out.”

His feedback left Charlize questioning whether or not the movie was any good — maybe he was right? She called Patty Jenkins, though, who quickly told her that wasn’t the case and forbid her from ever speaking to the man again. Charlize never had another conversation with him, but she did pop up again – in the behind-the-scenes featurette on the DVD.

“He takes credit for fucking everything,” Charlize said. Howard asked if Hollywood phoniness like that ever gets to her. “It annoys the shit out of me,” she replied.

As bad as working with that gentleman was, Charlize said working with Jenkins is just about as good as it gets, in terms of movie directors.

“I’ve never had anybody have my back like that,” Charlize said. “She was the first director that offered me a role and saw more potential in me than I saw in myself.”

She said Jenkins even offered her a part in the summer blockbuster “Wonder Woman,” but Charlize said she had to turn down the offer due to scheduling conflicts.

After “Monster” came out and Charlize cleaned up during awards season, she had her choice of several parts. Her decision: a guest starring role on the Fox sitcom “Arrested Development.”

“I’m very proud that I went and did a five-episode arc on ‘Arrested Development’ right after I won an Academy Award,” Charlize told Howard. “I was a huge fan of that show and I thought they wrote me something that was really funny and weird and different and that’s kind of what I wanted to do.”

About a year prior to winning her Oscar, though, there was another project Charlize really wanted to do that she was unfortunately let go from. “For a while I was attached to ‘Chicago,’” she explained. “I got kicked off it. Yeah, the director kicked me off it.”

Charlize confirmed she was originally cast as Roxie Hart in the big-budget musical. But when the original director left the film, their replacement wanted to go with someone else for the part — Renée Zellweger, whose performance Charlize was quick to applaud.

“She did an amazing job. So yeah, I’m fully envious of what she did,” Charlize said of Zellweger.

“Here’s the thing, though — I do understand,” she added about the director’s decision to replace her. “I totally get it. Still, I felt it a little bit.”

“Chicago” isn’t the only role Charlize has ever lost out on, however. She came very close to landing the lead in the 1995 movie “Showgirls,” but the part eventually went to actress Elizabeth Berkley. About a decade after the film came out, Charlize recalled running into Elizabeth and discussing what might have been, considering “Showgirls” was panned by critics following its release.

“She really was so classy about all of that,” Charlize said of Berkley’s ability to laugh off being in the film years later. “She’s one of the nicest, nicest people I think I’ve ever met.”

These days, Charlize often has her pick of movies and she told Howard it’s been a very long time since she’s had to audition. As far as the money she now makes, Charlize said it’s not about what she gets paid, it’s about how her pay impacts other actresses.

“It really is about women in our industry. Women who don’t have the freedom or the luxury in saying, you know ‘I’m not gonna do this job if you don’t pay me the same as the guys.’”

Charlize is once again calling the shots in her new action flick “Atomic Blonde,” based on the graphic novel “The Coldest City.” Theron serves as both a star and producer on the film with David Leitch (“John Wick”) directing.

“We were actively looking for something like this — something where a woman could be just as unapologetic as a guy and function with the same set of rules,” Charlize said of her character Lorraine Broughton, who kicks quite a bit of ass throughout the film. She and her production company Denver & Delilah Films are hopeful “Atomic Blonde” will resonate with audiences and become a blockbuster franchise.

To train for the role, Charlize said she worked out three to four hours a day for about two and a half months. “This is a woman that is completely fucking capable,” she told Howard.

In fact, Charlize trained so hard, she actually cracked a couple of her teeth while practicing some of her action sequences, explaining to Howard she was clenching her jaw too tightly while taking punches.

One of the benefits of all that training is that Charlize says she’s now in the best shape she’s ever been in her life.