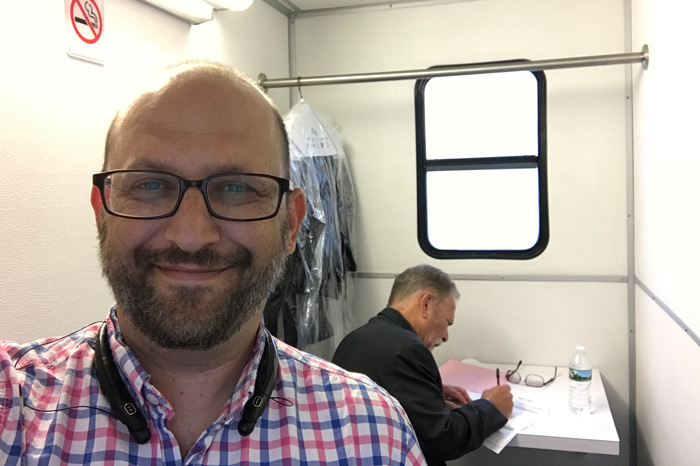 On Tuesday, Ronnie “the Limo Driver” Mund showed up to play “Pallbearer No. 5” in the upcoming Netflix film “The Week Of,” starring Adam Sandler, Chris Rock, and Steve Buscemi and directed by Robert Smigel. Thankfully, fellow Stern Show staffer Shuli Egar was in tow to document the entire experience.

Things got off to a bumpy start when Ronnie the Limo Driver was picked up by a driver of his own at the Stern Show studio, only to complain that the guy was a little heavy on the brakes according to Shuli. The two even decided to get out early and walk half a mile to the set.

“I don’t even believe what I’m hearing,” Howard scoffed, considering he has been subjected to a few rough rides himself in Ronnie’s limo.

Things didn’t get any better when the budding actor went to check in, either. “Mund!” Ronnie told the woman when she asked his name. “He barked it,” Shuli told Howard.

“I spelled it out for her,” Ronnie maintained.

It wasn’t until Shuli offered the full “Ronnie the Limo Driver” moniker that they were able to find his name on the list, though.

Once on set, Shuli took the opportunity to ask producer Allen Covert about the timing of Ronnie’s shoot since he was forced to leave early from the Stern Show.

“I was under the impression that he was done. I apologize to Howard if I was misinformed,” Covert said of taking Ronnie away from his primary job.

Howard pointed out that it wasn’t Allen’s fault, Ronnie was to blame.

Before filming his scene, Ronnie spent some time in his trailer like a true Hollywood star and Shuli couldn’t help but take a video of him walking up the stairs. “He’s got to pick his legs up so high to get up the steps,” the Stern Show correspondent explained amidst laughter.

Upon signing his contract, Ronnie made his way in front of the cameras and discovered that he would be working not only with Buscemi, but also Sandler and Rock under the direction of Smigel.

“I understand they gave you a line to say,” Howard prompted Ronnie.

“Not a line, a word,” his limo driver clarified. 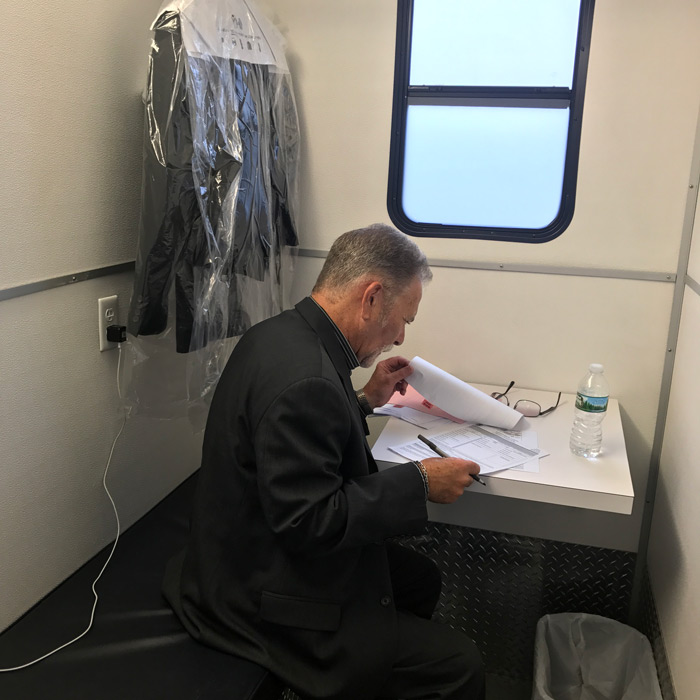 Ronnie Mund readies himself before heading to the set Photo: The Howard Stern Show

But before he even got to his word, Ronnie fell asleep in a scene seated between two major characters in the film … or so it seemed. He was instructed to act like he was asleep as the other two actors recited their lines and he took the direction very seriously.

After his improvised nap was complete, Ronnie moved on to his original scene where he was given a word to recite. The unseasoned actor couldn’t quite get his timing right, however.

“I guess I was anxious, ok?” Ronnie said defensively.

Ronnie was instructed to try taking a pause since he was stepping on another actor’s line and in the end they settled on a take where his word came noticeably late for the comedic value. 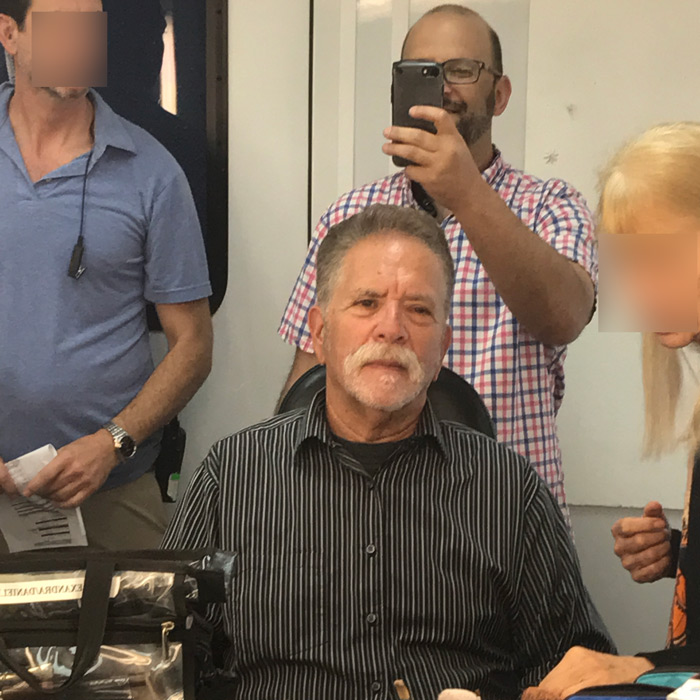 “He had a James Caan flair to him,” Sandler told Shuli of working with Ronnie. “There was a few mistimings of the word, but I’ll tell you, he did say it. He knew the word. He said it most of the time when he had to. When he didn’t say it at the right time he plopped it in at a very interesting spot,” he continued before also praising his “sleeping technique,” too.

Was he a breeze to direct?

“He should’ve said no. It was a mistake. It was a long day for Ronnie, but he seems happy now that it’s over,” Sandler added.

Ronnie didn’t leave before making one last impression, though. He bragged that one of the on-set van drivers asked him to record a voicemail for his friend, allowing him to adlib a filthy string of insults and curses. The only problem, as Shuli pointed out, was that there was an unrelated woman also seated in the van who was forced to experience the entire thing.

“She knows what it’s all about!” Ronnie insisted.

“The Week Of” debuts on Netflix Friday, April 27. Click here to watch it now!