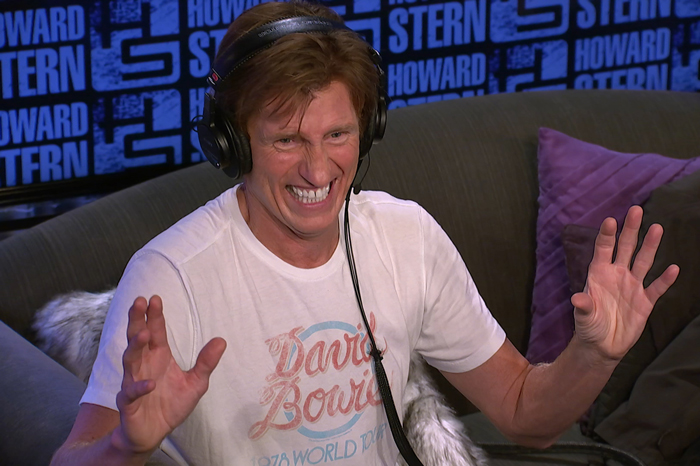 They say Kevin Bacon is no more than six degrees of separation away from anyone in Hollywood but perhaps no one is more closely connected to Kevin than comedian Denis Leary. On Monday’s Stern Show, Denis told Howard how often fans confuse him for the “Footloose” actor — so much so that Denis actually pretended to be Mr. Bacon during a recent Uber ride.

According to Denis, they hadn’t traveled more than a block before his Uber driver turned around and asked if he was the famous Kevin Bacon. Rather than tell the truth and explain who he really was, Denis just went with it, even letting the driver call his wife so she could talk to her favorite movie star. As their drive continued, though, the Uber driver began to suspect Denis wasn’t who he said he was.

“I’m in the back, being Kevin Bacon … he’s up in front and at the red light, he started Googling,” Denis remembered. When the driver pulled up a picture of the real Kevin Bacon and compared it to his passenger, Denis’s spot was blown.

“He fucking kicked me out. I had to walk, like, four blocks home,” Denis said. “Fucking Kevin Bacon, man.”

Listening to the Stern Show live happened to be the real Kevin Bacon, who took to Twitter to compliment Denis during his interview with Howard. Check out his tweet (below).

@denisleary killing it on @sternshow @kyrasedgwick will love this. And the cabbie got the movie wrong. Wasn’t in Flashdance. So F-ing funny

This isn’t the first time Denis has been mistaken for Bacon, either. He also told Howard he suspects Rolling Stones guitarist Keith Richards has mistaken him for Kevin on several occasions, including when the two ran into each other on a beach in Turks and Caicos. Denis had gotten up early to watch the sunrise when he spotted something in the ocean.

“A head comes up out of the water and the eyes open … and I’m like, ‘What the fuck is that? Is that a seal?’” Denis told Howard. It ended up being Richards, seemingly emerging from an early-morning swim.

Denis gave him a cigarette and the two talked briefly about the weather, with Keith commenting how it was a “beautiful fucking day.” Richards then said goodbye and went on his way.

“I was like, ‘What the fuck is that?’” Denis said with a laugh. “I think he thinks I’m Kevin Bacon.”

While the real Kevin Bacon has hosted “Saturday Night Live” before, Denis explained to Howard why he has no interest in appearing on the famed late-night series, even after being asked to host by show creator Lorne Michaels.

“I had too much respect for it to do it,” Denis said of why he turned Lorne down. Several of Denis’s friends got their start on “SNL,” so he knows how hard everyone on staff works in order to make the show a success.

He will, however, gladly do the Stern Show since all he has to do on the air with Howard is have a conversation. On Monday, Denis talked a bit about his new book “Why We Don’t Suck: And How All of Us Need to Stop Being Such Partisan Little Bitches,” available Tuesday. In it, he writes about meeting one of the Beatles while at the dentist’s office. He was sitting in the waiting room when he heard someone casually say, “Hey Denis.”

Startled to see the rock and roll superstar standing in front of him, Denis asked Paul what he was doing there. His answer was, of course, he was there to see the dentist.

“And I said, ‘Let me see your teeth,’ like a fucking idiot,” Denis said. “I was so overwhelmed with stupidity.”

Paul hesitated a little but eventually opened wide and allowed Denis to get a good look inside his mouth. “I go, ‘Oh wow! They’re so white!’ That’s what I say to fucking Paul McCartney,” Denis revealed as Howard and Robin cracked up.

Afterwards, Denis called his mother and excitedly told her how he’d just met McCartney. She nonchalantly replied, “Did he think you were someone else?”