His next album “Sweet Southern Sugar” comes out Nov. 3 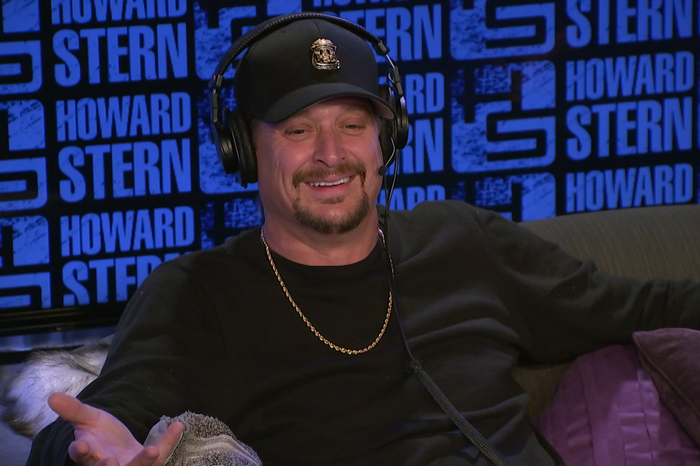 Will Kid Rock be the next senator to represent the great state of Michigan? He made his intentions loud and clear on Tuesday’s Stern Show.

“Fuck no, I’m not running for Senate,” he told Howard. “Are you fucking kidding me? Like, who couldn’t fucking figure that out?”

When rumors he was running for elected office got back to Kid Rock, rather than correct the inaccurate reports he decided to go along with it, even creating his own campaign signs and playing the part of politician during many of his live shows. And though his Senate run was a stunt all along, Kid Rock told Howard several D.C. bigwigs threw their support his way, including former White House Chief Strategist Steve Bannon.

Kid Rock was invited to visit the White House back in April along with Sarah Palin and fellow rocker Ted Nugent. The group reportedly toured the executive residence before having a sit-down dinner with President Trump. Though Rock was a supporter of Donald Trump during his bid for the presidency, he told Howard that had nothing to do with why he went to the White House that night.

“I don’t give a fuck who the president is … fuck yeah, I’m going,” Kid Rock explained. Throughout the years, Rock has had the opportunity to meet with the last five U.S. presidents, including Obama, Clinton, and both Bushes.

When Howard asked Kid if he put a lot of thought into what he wore to meet President Trump, he admitted he wound up wearing the exact same sweater he had on this morning for his Stern Show appearance.

Getting dressed up is usually reserved for weddings and funerals only, Kid Rock told Howard. So when the Kennedy Center suggested he wear a sports coat during their annual award ceremony, Kid Rock revealed he replied back, “Ain’t fucking happening.”

His most recent appearance at the Kennedy Center Honors was in 2012 where he performed “Ramble On” in front of honorees Led Zeppelin. But it was in 2004, before his tribute to Elton John, that Kid Rock recalled meeting a woman he didn’t know backstage.

That woman turned out to be Caroline Kennedy and she politely turned down Kid Rock’s offer before stepping out on stage to talk about her father John F. Kennedy and the history of the Kennedy Center for the Performing Arts.

“Don’t I feel like a dick. But I still wore my t-shirt,” Kid Rock joked.

In addition to performing at several Kennedy Center Honors ceremonies, Kid Rock has also been asked to induct a number of musicians into the Rock and Roll Hall of Fame, including Aerosmith, Bob Seger, and Lynyrd Skynyrd.

“They keep calling me to induct people,” Kid Rock said with a laugh. But as for whether he cares about being inducted into the Hall himself one day, he told Howard it doesn’t quite matter to him. In fact, he’s not sure he wants to be involved in the music industry at all anymore.

“I fucking just would love to make music and go out and play for people,” Kid Rock said, explaining he’s grown tired of the grind that comes along with being a famous musician.

However, he’s definitely not tired of the perks that come from fame, mainly his own private plane.

“People say there’s nothing better than fucking good pussy, that fucking plane is fucking better than any fucking pussy!” Kid Rock told Howard. His ride in the sky is a Bombardier Challenger with “Western interior” that Rock says he flies all over the country, sometimes taking his friends out to dinner in an entirely different city just because he can.

“I will live in my fucking doublewide fucking trailer in Alabama and sell everything … I’m not getting rid of that fucking plane,” Rock continued. “I’ve got a lot of problems, money and pussy ain’t one of them.”